No curtains meant I woke up bright and early, around 5.30am – I took myself for a wander along the shore while Callum slept on. It was a misty morning, so much so that the opposite shoreline was barely visible; the valley was filled with a white void. The birds were already active swooping and squawking as they had been doing the previous evening, accompanied now by the distinct sound of songbirds from the surrounding trees.

The small soil cliffs, seemingly held together by nothing other than bracken roots, along the water separated the rocky shore from the grass bank. All the way along they had small caves dugout, or more likely washed out, the sides littered with large rocks that would fall away leave large indents. The ‘caves’ were only small but I had a nosey in a couple anyway – by the number of webs and other nests they are obviously a decent habitat for insects.

The air was cool and damp and it was very peaceful, I sat and enjoyed the serenity for a while – until the midgies found me and decided to tuck in. I headed back to the van and, rather wonderfully, fell back asleep for another couple of hours. It was just as misty when we woke up later – door open to enjoy our surroundings and porridge for breakfast was a good start to that day. We headed off in the same direction we had been travelling in the previous night and, in no time, found ourselves at St Mary’s Loch and the tiny village there. Surrounded by small peaks which were shrouded in cloud, the calm water was reflecting a lovely albeit grey scene.

Before coming we had looked up some easy walks in the area, only being away for a couple of days meant we wanted to avoid anything too strenuous – a relaxing weekend was what we were after! We knew there was a walk around St Mary’s Loch, called the ‘Ring of the Loch’ trail. It was an easy, low level 8 mile wander around the perimeter of the reservoir which suited us perfectly. The day was warming up and the cloud cover was creating much unwanted humidity, however it was bright and beautiful and we were happy to be there.

The walk starts on the south side of the Loch which is unreachable by road, the first stint through a field of complacent ewes and skittish lambs before crossing a threshold into ‘March Wood’. It was a small section of ancient native woodland, the floor covered in soft, vibrant grass dappled in light under impressive veteran trees (info panels gave a little background history to the area which was interesting.) Through the wood the path opened up into a well-made track, to the right was a dense forest edge and a grassy verge teeming with wildflowers and to the left, small trees and more wildflowers with the water just on the other side. The clouds were breaking up a little and with the birds chirping, the bumblebees buzzing past and the hectic flitting of the numerous butterflies (not to mention the heat) it felt like a lovely summery day.

Reaching the end of the water we headed over the reservoir bridge, for a short time it all got a little too obviously man made for my liking. We walked through a few more fields, crossed the road and continued our walk on the other side. The ground started to undulate a little more, although it was still very much a low level walk, this time through fields that were used for sheep, they were well cropped! Passing a patch of light, leafy trees, we perched on some big rocks watching a couple of birds we didn’t recognise. Every so often we would come across a gnarled tree, full of character and sat alone against its rolling backdrop. 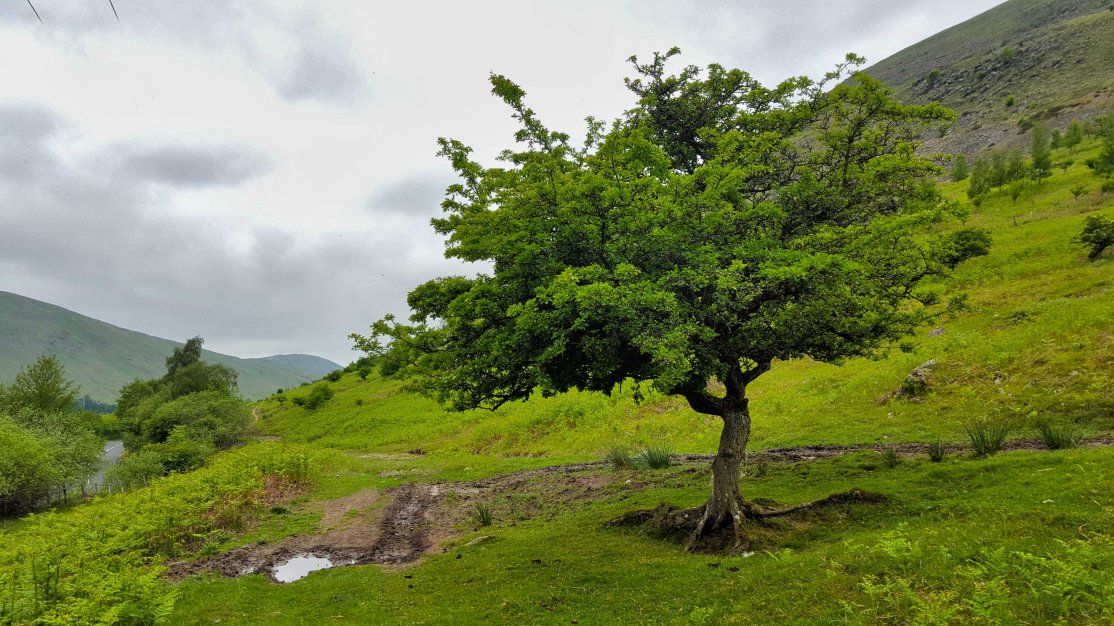 The last quarter of the walk varied between woodland, pebble shore and grassy stretches, the sun was out by this point so the humidity had lessened slightly, thank goodness! Before the final wee stretch we found ourselves crossing a small stream and wandering through swathes of wildflowers. All shapes, all sizes and all colours – it was a fantastic display and we could tell from the loud, continuous buzzy hum, that the bees loved it as much as we did! 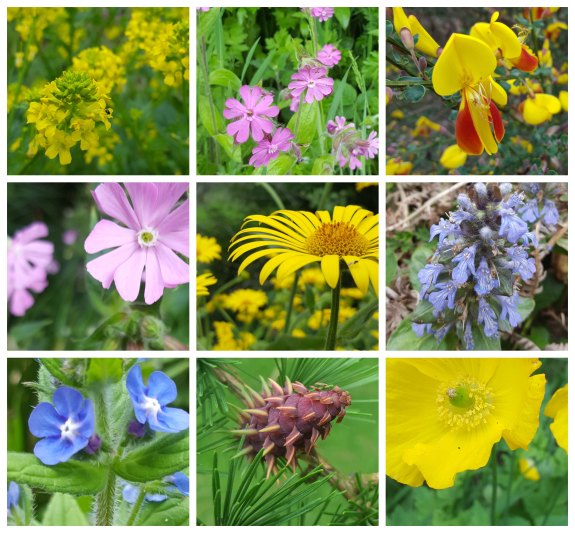