Our next stop on our visit east was Lindisfarne Island, known as the Holy Island. It is a tidal island, cut off from the main land when the tide is in, however when the tide is out it is accessible by the causeway across the large expanse of sand separating the two.We had a couple of rooms booked on the Island and the tide time worked perfectly in our favour!

After exploring the Beaches and castles of Bamburgh we made our way across the causeway in the late afternoon, the tide was due to come back in around 7pm. So while we found our hotel and got checked into our rooms everyone else (day trippers) were making their way back to the mainland before the causeway was cut off by the ocean. We dined on yet more delicious pub grub and then decided to make the most of what was now a beautifully sunny evening and explore the island. 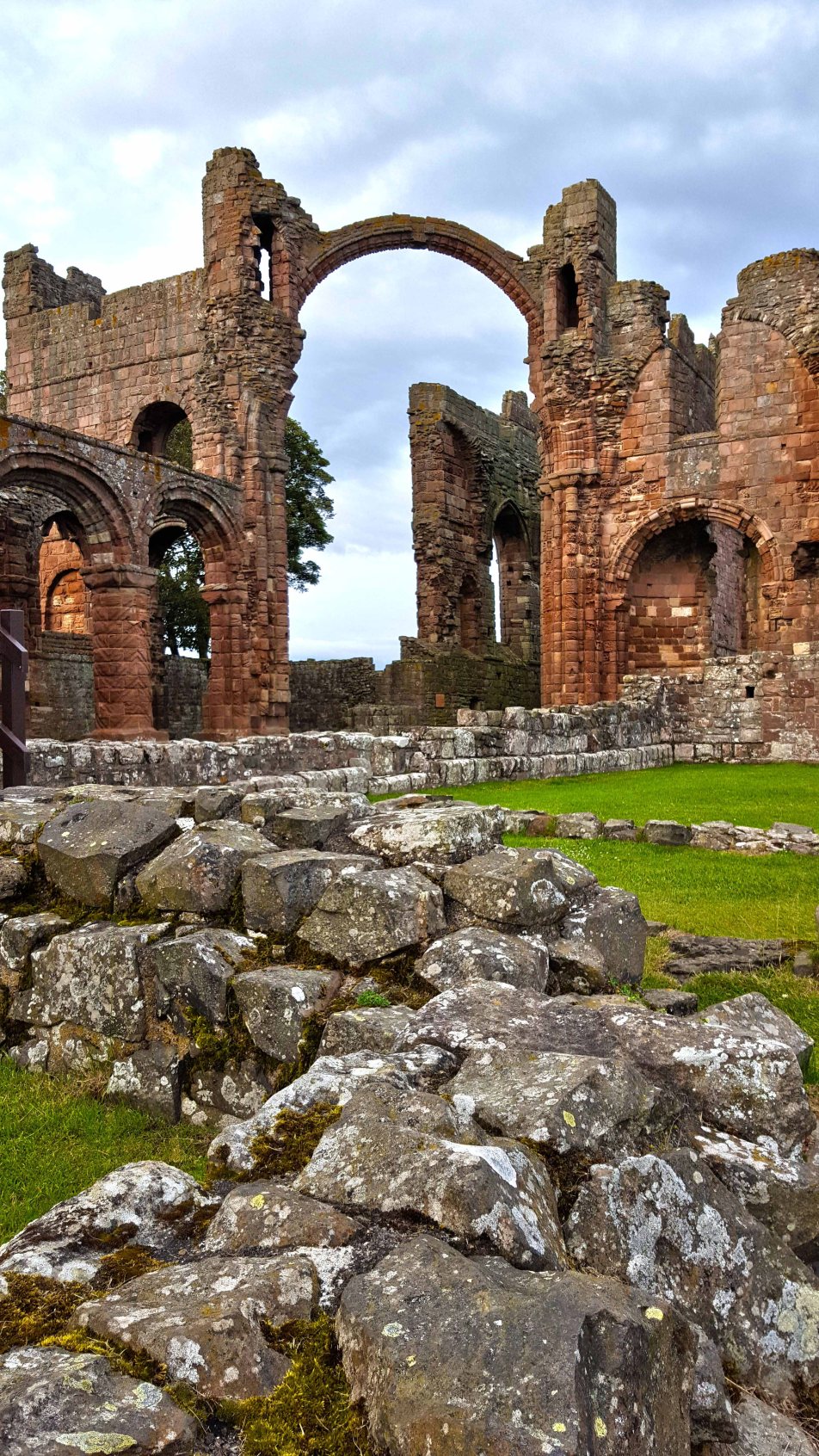 As we wandered through the streets it seemed like we had the place to ourselves, the bustle we had arrived in earlier was gone and all that remained was quaint cottages, chirping birds and a wonderful peace. There were a few locals going about their business and we popped into the mead shop for some samples, they woman working in there were very friendly and informative, and very generous with the samples! Although I wasn’t a huge fan of the mead itself (not being much of a wine drinker) there are definitely a few delicious liqueurs on my list for when I return! 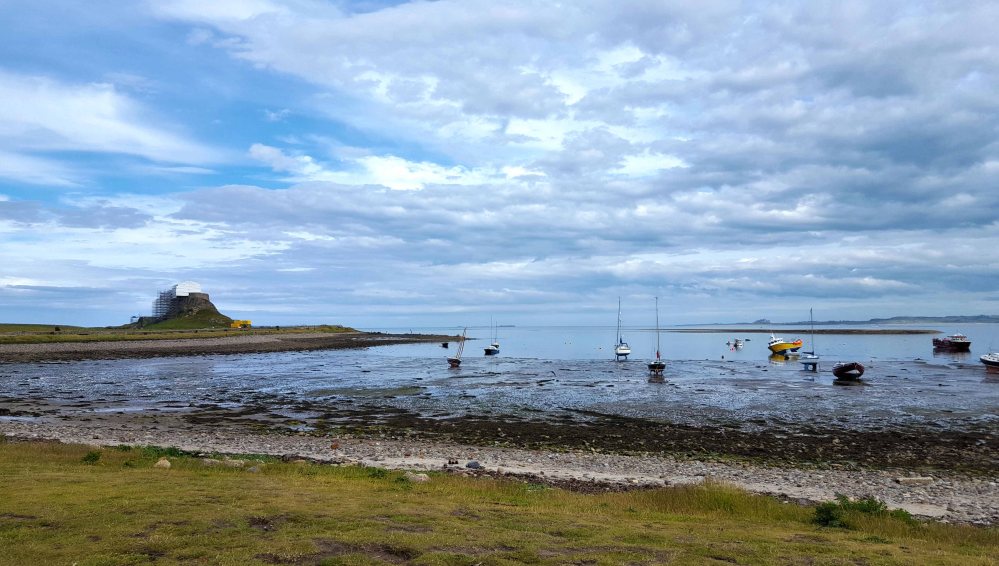 After the village, we decided to wander towards the castle and ended up sitting on the grass overlooking the small harbour, boats bobbing and waves lapping the shore, it was lovely to sit (and natter) while we enjoyed it. My mother, who is a sucker for a rockpool, was down on the rocky beach, poking around for crabs and putting stranded fish back in the water.

We had a wander around the priory, a typical ruin displaying beautiful masonry in what remained, and then headed up to a higher vantage point to take in even more of the stunning views. It was getting to dusk by this stage and the sun was lower in the sky, shining through the clouds and casting a yellow glow across the water. Three seals were bobbing around below us, and although not nearly as up close as when we were on the Farne Islands, it was lovely to see them swimming in such a natural setting. Eventually we tore ourselves away and decided to head back to the hotel; the setting sun was shining through the priory with an intense orange glow. We had only been on the island a matter of hours but the quiet, the views and the serenity were wonderful and it was safe to say the Island had won us over pretty quickly.

As a birthday treat my parents had booked me and Callum into a beautiful room in the hotel with one window looking out onto the castle and the sea, and the other window looking out over the priory. It was a big, bright room with a big comfy bed and after a good night’s sleep I woke up to blue skies and twinkling water, there was a light breeze coming through the windows and I could hear the church bells ringing from across the way – now that is how to start a birthday!

After breakfast in the hotel, and some time to open presents, we decided to enjoy the sunshine and go for a walk around the island, there is a nice 3.5 mile loop which takes in the main body of the island. Starting through a wooded lane, which was surrounded in all directions by fields of long grass and wildflowers, we had the usual summery soundtrack of bees and birds to accompany us. Emerging from the lane, we walked along in the grass just at the start of the sand dunes, to our left we could see them undulating towards the sea which, at this time, was obscured from our view. It was a warm morning but the cool wind made for a very pleasant walk. Continuing on our route, past a couple of cool wicker statues of wildlife, we came to what is essentially a corner of the island, we broke off the main path and followed a grassy track toward the water.

We decided to sit on the bench for a while, chattering away and enjoying the sunshine. The waves were lapping noisily against the rocks as the wind was creating larger waves than usual. The water was a deep blue colour with green tinges, contrasting against the blue sky of a bright summer’s day. There was nothing obscuring the view, it was just ocean all the way to the horizon and every so often a seabird flew past, which we could now identify! Another moment of dragging ourselves away from the view we continued along the grassy track, running adjacent to the shore which brought us back around and up past Lindisfarne Castle.

The castle is currently undergoing some extensive conservation work, the scaffold which covered one side of the beautiful building was a masterpiece in itself, and cost around half a million pounds to erect, according to the castle staff! Despite this, it still looked wonderfully picturesque perched up on its rock with a backdrop of endless blue. There is currently no furniture inside, which I personally preferred as we were able to see all the different architectural styles of the different time periods. Original tudor beams, worn stone steps and 14th century archways… right at our fingertips. It was pretty impressive.

Once again the tide times were perfect for us, people couldn’t get onto the Island until about midday – so we had the place to ourselves. The members of staff were extremely knowledgeable and passionate, and being the only ones there meant they were able to give us a lot of their time. For me this really added to my experience of Lindisfarne castle, I was able to learn so much and therefore appreciate it so much more – obviously the glorious sunshine helped a little! As we exited the castle we got to see the resident kestrel swoop in with a mouse to feed his chicks, pulling off the scraps of meat and feeding it to the young while they squawked and jostled to get their fair share, it’s the closest encounter I have had with a kestrel and it was great to see them so close up!

We meandered back to the hotel in the sun, by this time people were arriving and the small streets were getting busier and busier. We had one last look around the village, cream teas for lunch and then decided it was about time to pack up and start heading back to the west. It was a flying visit, but as always we managed to pack a lot in and it is definitely somewhere I will be visiting again.