We seem to be in the middle of an endless summer, extremely uncharacteristic of the Lake District we have had continuous sunshine and next to no rainfall. The becks are drying up, not great for those houses plumbed straight from these water sources (and that is a surprising number in a rural area like this), and we have had an explosion of blue green algae in Ullswater, which was tested and confirmed to be harmful. Although these circumstances are not ideal, it has also meant that the lakes are a great temperature for swimming, even without a wetsuit – once again very uncharacteristically for the Lakes, and we have had beautiful clear, dry nights with absolutely no risk of rain at all. You would be a fool to not make the most of it!

It was another hot day (they are becoming quite boring now (where are the torrential downpours and thunderstorms?!) and I had spent most of my week sat inside on some training with work – granted it was in a beautiful eco building, crafted out of wood and designed to be as self-sustaining as possible, nestled in peaceful woodland in the south Lakes. However it was indoors and sat down for far longer than I am used to and, coupled with the weather, we decided we had the perfect excuse to go and have a mini adventure after work. 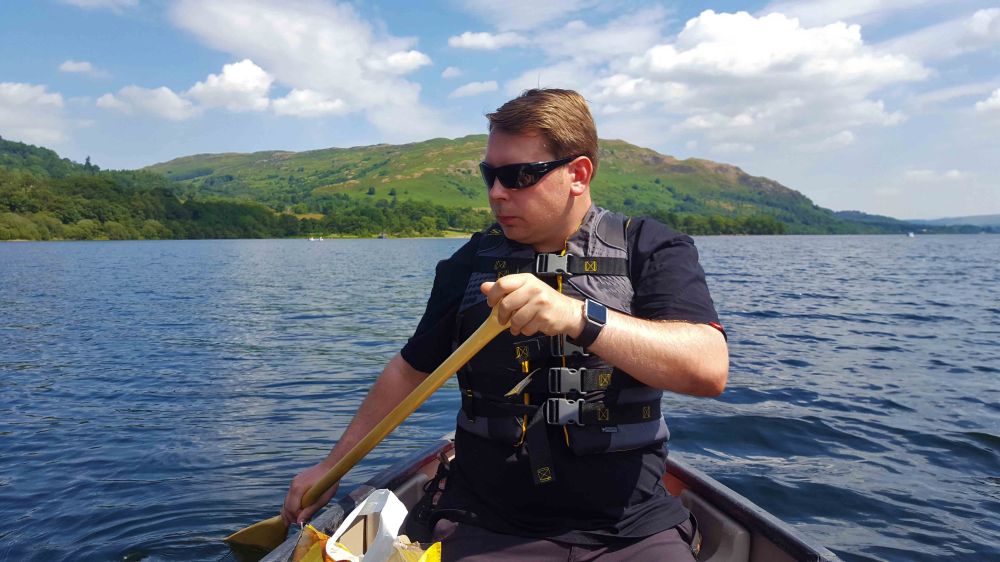 We packed up the canoe taking a little more than we usually would, opting for a BBQ style dinner rather than the usual easy to carry and cook menu as well as making sure we had swimming stuff. On the other hand, we did leave the tent behind, with a view to try out our new bivvy bags!

We departed from Glenridding in the early evening; it was still busy with holiday makers so it was nice that in a few swift strokes we were leaving all that behind for the peace of the other side of the lake. Paddling across to the other side it is instantly and noticeably quieter – perfect! We took some time to paddle near the shore, exploring some of the cool rock faces jutting out of the water, there were a couple that were shaped almost like chimneys. Paddling up to them and poking my head in I could see the glinting reflections of the water and hundreds of insects – as much as I love insects I didn’t hang around underneath for too long.

In the shallows the water was perfectly clear, small fish would dart off as we approached and the reeds and weeds would sway in the movement of the water, looking psychedelic as the light caught them, illuminating the green. We paddled in the sunshine, passing by the usual small islands and heading round past Silver Point – we planned to paddle up to Hallin Hag woods to check out the lay of the land from the water. Turning the corner of one of the main bends in the lake, we were suddenly heading into a stiff breeze, although not terribly strong we felt the extra effort we had to put behind each stroke. 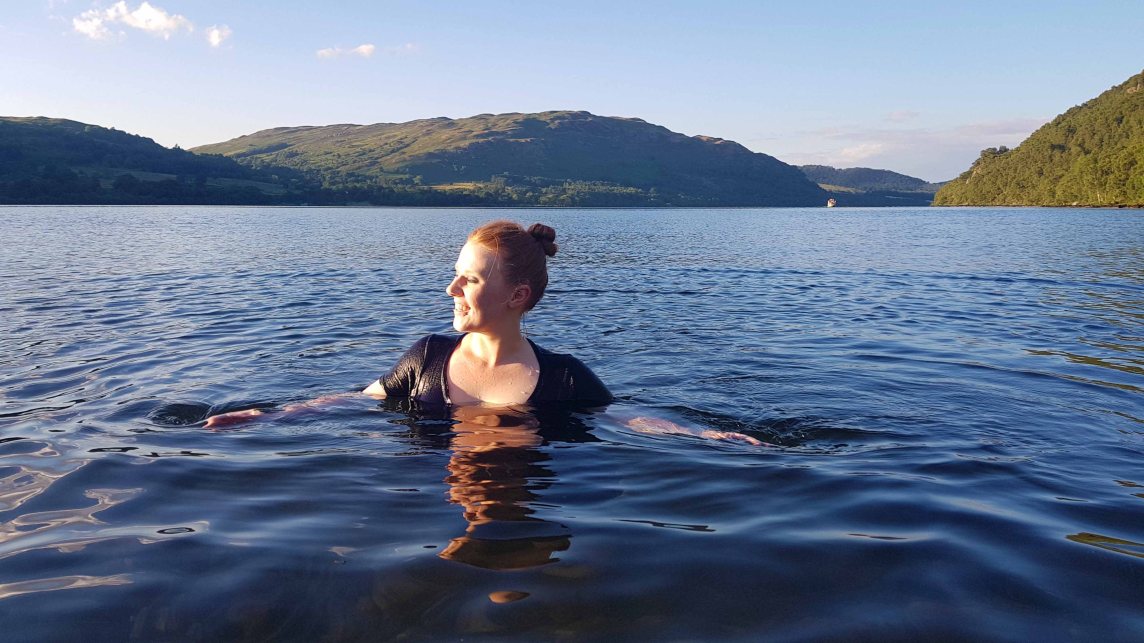 Time ticked by as we made our way up the lake, enjoying the sunshine and chatting away about our days. The shore line was rocky, and although interesting to look at, not great to try and sleep on so we eventually decided to turn around and head back to one of the small, flat pebbly bays that were dotted along the south shore of the lake. Heading back the wind disappeared again and it seems that any clouds that were in the sky had vanished also, the sun was beating down no us as we put stroke after stroke into the water. Land approached slowly and by the time we felt the gravel scraping along the bottom the canoe we were glad to be getting out to set up camp in what would be our home for the evening.

After beaching the boat and unloading our stuff I decided it was perfect time to go for a swim, there didn’t seem to be many people out on the lake at all by this point and the water was perfectly clear, indicating that there was none of those pesky algae blooms around to ruin my day. The water was warm but still refreshing, the small fish darted off as soon as they became aware of my presence and the long reeds seemed to enjoy tickling against my legs as though trying to entrap me (I have an active imagination, the slightest brush of something is most certainly a giant pike that has decided to feast upon me!) As the sun dipped behind the fells, casting us in to shadow we decided it was time to head to land and dry off.

Swimming always makes me hungry, so dinner went down a treat and made me feel fairly sleepy and content afterwards. We opted to use our camping stove to avoid the risk of lighting a fire, especially as everything was so dry – we were essentially surrounded by tinder. As the light was fading slowly and we feeling progressive more tired, we got in our bivvys, and spend the remainder of the evening looking up at the bright sky, listening to the ambient sounds of the valley, setting the world to rights as we usually do. Eventually, but long before it got dark, we drifted off to sleep. 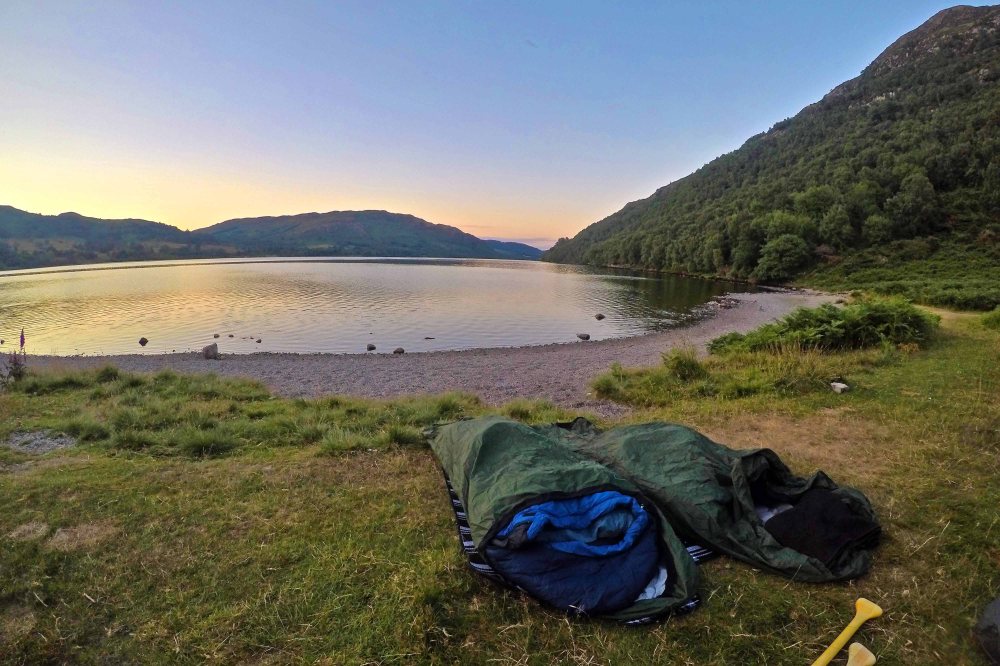 One of my favourite things about bivvying is the total immersion into your environment, just open your eyes and it is right there in front of you, you are completely in it, with nothing in between – I enjoyed this a couple times over the course of the night. The first disturbance, I came to just as it was starting to get dark, the nearby trees were in dark shadow and it was hard to see the detail in things. Close by in the trees I could hear an owl hooting and further away, deeper in the next valley over, I could hear what I believed to be a fox making is usual shrieking sound. Callum was snoring and I tried to wake him up so I could hear better, unfortunately he didn’t come to, instead he spent the next 5 minutes rustling around so I gave up trying to listen and went back to sleep.

The second time it was as dark as it was going to get, the sky was still a washed out grey colour but the stars twinkled against it nonetheless. It was a perfectly still night, only a slight breeze rustling in the long grass next to us made any kind of sound and the longer I looked up at the sky, more and more stars were coming into focus appearing before my eyes. I tried to stay awake for a while but ended up drifting off again. The third time was early in the morning, around 4am, I woke up on my side and was therefore looking out over the water, the sky was bright with blue hues up high fading into a vibrant orange glow around the silhouettes of the surrounding peaks. 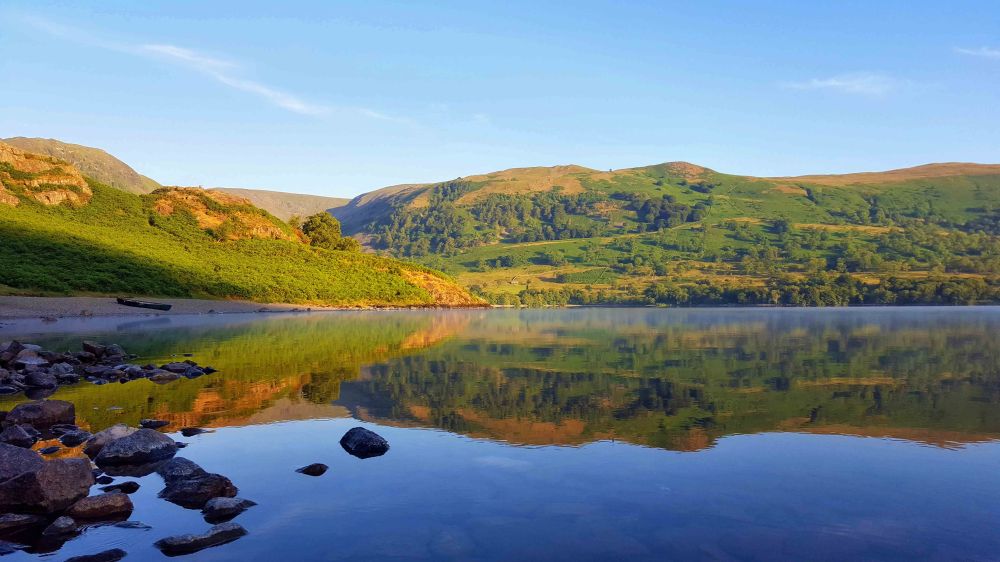 On awaking properly, there was a crow cawing noisily on the beach, marching around the canoe, inspecting our wares suspiciously and the sun was warm and bright, creeping towards us as it rose slowly into the clear blue sky. A thin layer of mist seemed to be constantly pouring off the water as we pottered around enjoying the calm morning. Callum went out for a paddle in the canoe and I went back in the water, although only up to waist height this time. It was significantly cooler than the previous evening but still plenty warm enough for us, after playing around for a while we packed everything back into the canoe and headed off, leaving our peaceful secluded spot behind. 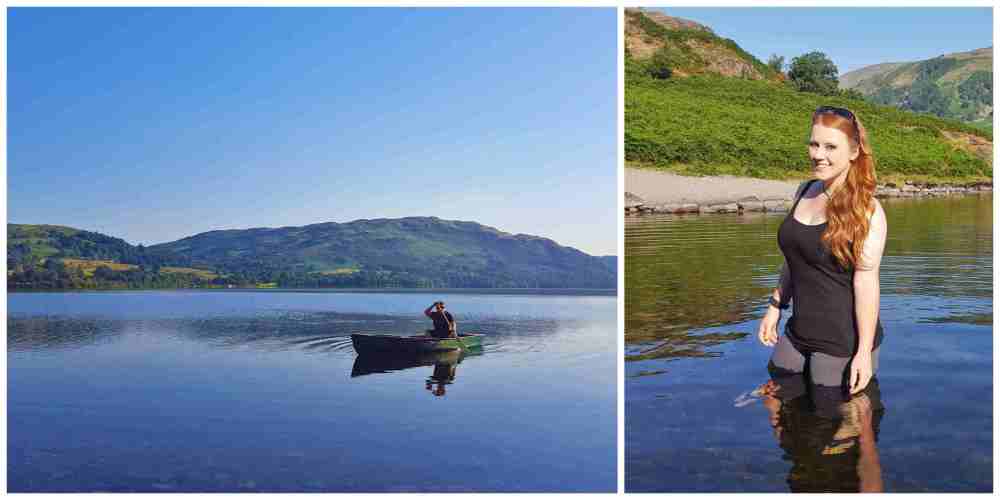 It was the kind of morning we long to be out on the water when usually driving to work; the water was perfectly clear reflecting a mirror image of the hills. There wasn’t a soul around and due to the quietness we decided to head to a spot on the shoreline where we had heard rumour of otters moving back in. Gliding silently, parallel to small pebbly stretch, peering into the trees for any movement – we had absolutely no luck whatsoever; the only movement was a crow, skulking around in the shadows. Moving on from the fruitless search, it was time to stop for breakfast, we pulled up to a grassy patch and enjoyed a rather rock ‘n’ roll breakfast of muesli, sat in the dappled shade of a big tree. 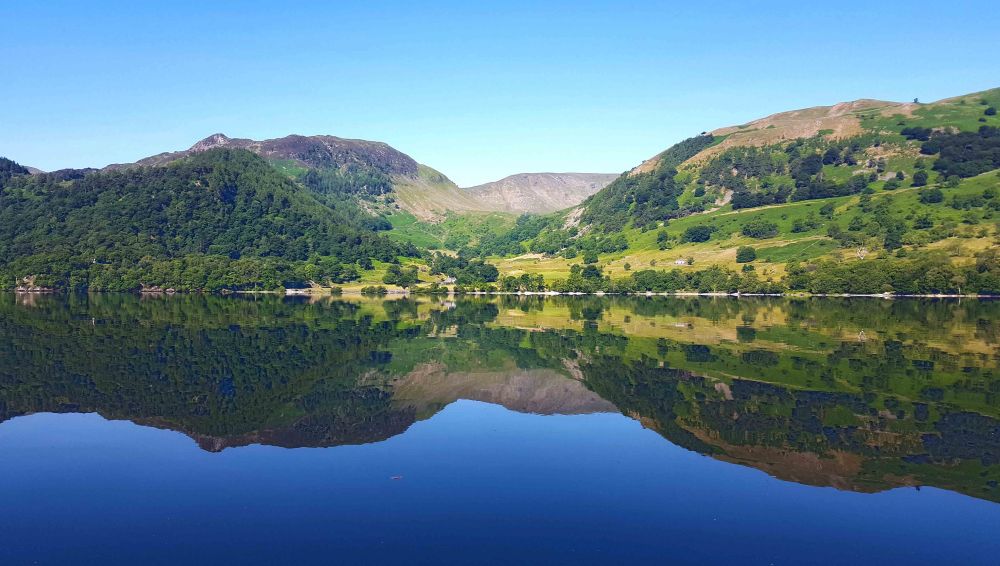 Afternoon came and was spent much like the morning, on the lake paddling around – the day was hotter than the previous and we felt extremely exposed to the sun out in the middle of the lake, the breeze would come and go but we still found ourselves searching for and pulling the boat into a shady spot, under an overhanging tree which had apparently grown straight out of the rock face, to have some lunch. A quick refuel out on the water, feet dangling over the edge, like any sensible human would do on such a day and we were back on our way, ready to head home.

Arriving back in Glenridding we were met with a similar crowd to what we had left behind the previous evening. People were dotted everywhere, enjoying the weather and the scenery. We made light work of reloading the stuff into the car and hit the road to head home!