Upon awaking and seeing the sun shining on the contours of the mountains, against a back drop of powder blue I woke Callum up to tell him what a lovely morning it was… poor fellow. I was torn between getting up to enjoy it and staying cosy allowing myself to sleep a little longer. Sleepiness prevailed and I dozed off again but the next time I came to the beautiful morning was to too good to resist. I got up and went for a wander, along the grassy bank overlooking the river until I found a gravelly section which looked easy enough to climb down. The gravel was probably a bad choice, with every step it gave way and I was slide down about a foot further than I had intended, luckily I didn’t fall and I was down by the water in no time at all.

I found a low flat rock, sat out in the river, just an inch or two above the water line – I sat and enjoyed the sun, which was warm despite it being early. The sky was pale, washed out and hazy around the sun and more vibrant further away. The hills, grass and rocks were drenched in the morning glow, long shadows cast out behind them. The water carried on its business as usual, gurgling and bubbling on one side of me, trickling on the other with the background rush as the river as a whole. A pair of birds swooped through the air around me, flitting off downstream and out of site. The water was much colder than the previous evening, my hands were only in it for a short time but they felt the initial prickling of ‘too cold’!

I sat on my rock, with my eyes closed listening to the sounds of the glen when suddenly, in the distance, I could hear the high pitch call of a buzzard or eagle, barely discernable over the noise of the water yet unmistakable. Same old story – the breeze died down and the midgies started to annoy so I reluctantly made my way back to the van. When I noticed the wind had picked up again I laid the blanket outside and carried on what I was up to out there – Callum watched me sleepily from inside the van. The whole morning was a loungey affair, I moved onto my third book of the week and we cooked some egg rolls for breakfast before slowly making our way out of the glen.

We decided to head through Oban, always nice to wander around the busy streets and grab some lunch before driving towards Loch Awe for our final night. Loch Awe seems to be somewhere we stop fairly often on our way home, we can wake up and comfortably do the rest of the journey without getting back too late – how drearily sensible, aye! We took a different route than we have previously done and the road was atrocious, pot holes everywhere! It was slow going but we got there in the end.

Before picking a final destination for the night we stopped off at the Falls of Avich for a walk – we had stopped here years and years ago for a walk with Quinn, and then tried to visit more recently only to find no entry signs due to work going on. This time it was all open and we found out that they were actually putting in a hydro-power system, to use the river to create energy – which is awesome. Due to the works the walk felt less natural than it previously had, the hydro is new and shiny and the land hasn’t fully recovered yet, hopefully when we go back in a couple of years’ time it will be more like it was. It was, however, nice to get out and stretch our legs.

We happened across a handful on tiny (less than 1cm in size) frogs, struggling to make their way across the rocky path. The path broke out of the woodland and onto a larger forest track, dense trees on one side, and then a small trodden track broke of this and led down a bank to the falls themselves. They are small cascades leading into a dark pool of water, not very tall but aesthetically pleasing with the water tumbling down the various levels of rock. It had become a muggy day as the cloud cover become denser, and we sat for a while between the trees, near the water taking pictures and generally being silly.

Getting back to our starting point we decided to do the second walk which headed out from the area, this one was an oak woodland walk. The sun was just breaking through the clouds in small patches as we made our way up the grassy track, wide enough to walk two abreast, with trees of varying ages and species stood tall, either side. The path climbed steadily and didn’t seem to stop climbing, all the way… even on the way back!

It was a lovely, green walk passing old tumble-down stone buildings and crossing babbling brooks by little wooden bridges, always surrounded by old gnarly looking trees and shrubbery of varying thickness. There was the occasional persistent horsefly which buzzed around us annoyingly and the odd bumblebee would lumber past noisily, but other than the insects we didn’t notice too much wildlife. The green leaves offered dappled shade but it was still hot and muggy and despite it being a lovely walk we were glad to get back to the van to cool off. 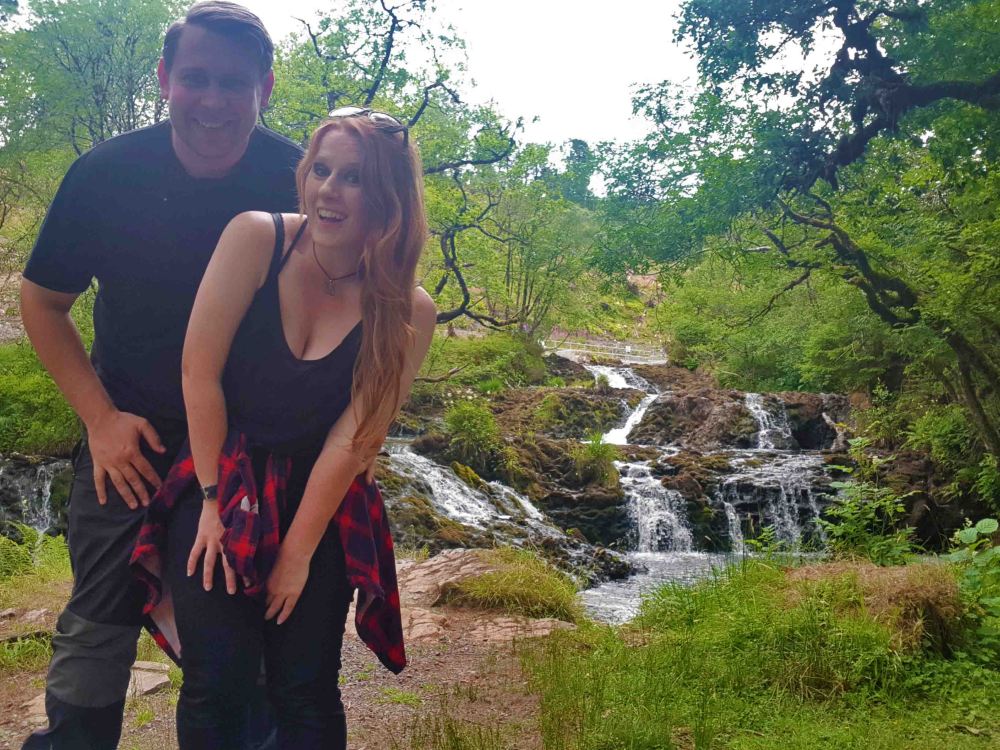 Picking a decent spot with a nice view we set up camp for the evening – after the endlessly dramatic views of the north-west coast and the towering glens we had frequented earlier in the week it is easy to be underwhelmed when heading south again. I have to remind myself that it is beautiful albeit more tame. The water had a silvery tint to it under the grey sky, small amounts of blue disappeared quickly into the endless grey clouds. The trees surrounding the loch were a rich, dark green colour, as we were in a working forest there were areas of tree graveyards, and young plantations offering variations in patches around the circumference of the water.

We ate, chatted and played cards as the sky grew dark until we felt it was time to turn in, although it felt like we were up late it is hard to tell whether it was just the dark clouds fooling us into thinking it is was later than it was. Nevertheless we fell asleep and slept soundly until morning. We woke up to a rainy morning, large puddles had accumulated by every door of the van, and it felt fitting that we were to be heading home.