An early(ish) flight from Manchester had led to us sleeping in the van the night before; we wanted to avoid the cost of a hotel or a disgustingly early drive down there from the Lakes. It meant the very start of our journey was very easy, bags were already packed, parking for the van had already been arranged and paid for and all we needed to do was get up, get ready and head to the airport via the shuttle buses that conveniently run every 15 minutes.

Actually getting onto the plane was another matter entirely – even with a couple of hours spare we got stuck at a bottleneck going through security, they were quite obviously understaffed and we ended up having to display some power-walking prowess through the airport to our gate (which happened to be bloody miles away!) We just made it, and there were even a couple of people that got on after us which rather pleasantly shifted the focus on to those latecomers instead of us latecomers! From that point on, though, it was all smooth sailing…

As the plane descended we could see for miles across the flat landscape, this is something that remained novel to us for the entire trip. Copenhagen airport was easy to navigate and a bus from outside took us straight to pick up our car for the week. This was my first experience of driving on the right, in a left hand drive, for that first half an hour or so my lane discipline was terrible and I can’t even remember how many time I stroked the door looking for the gear stick. Luckily we were headed straight out of the city onto the big fast roads which made the experience a lot less stressful than it could have been! 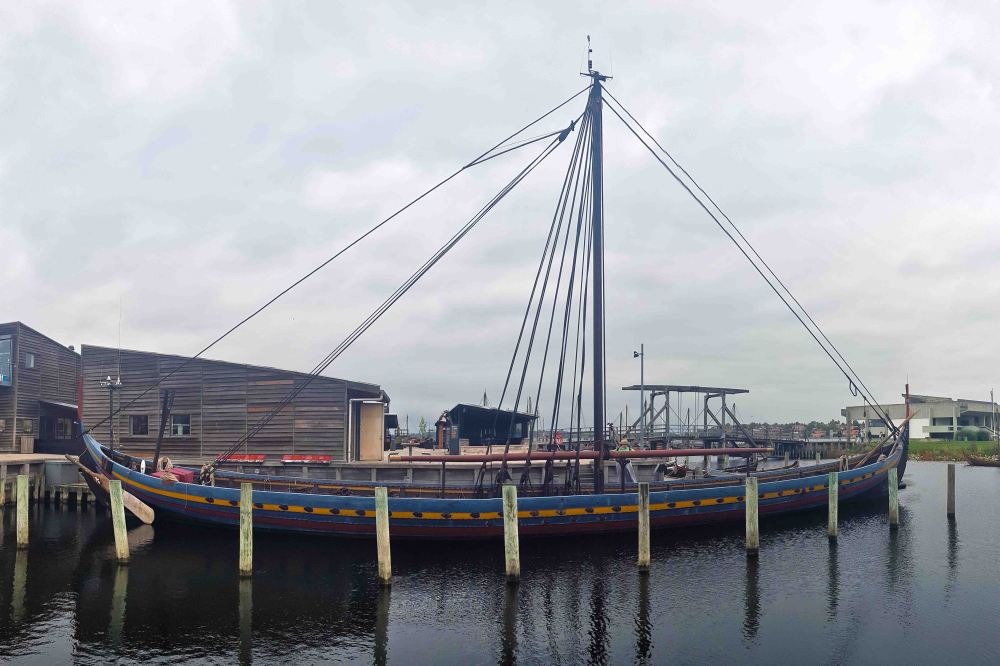 We headed straight for Roskilde and happened to park up right by the Viking Ship Museum, we didn’t go in but it was interesting to see all the reconstructed ships sat in the water around the museum itself. Wandering into the town, we meandered our way through the streets and up a small lane which brought us out right in front of the Cathedral; Roskilde Domkirke is a UNESCO World Heritage Site, it was the first Gothic cathedral to be built in brick, which apparently encouraged the spread of the brick Gothic style found throughout Northern Europe and until the 20th century it was Zealand’s only cathedral. 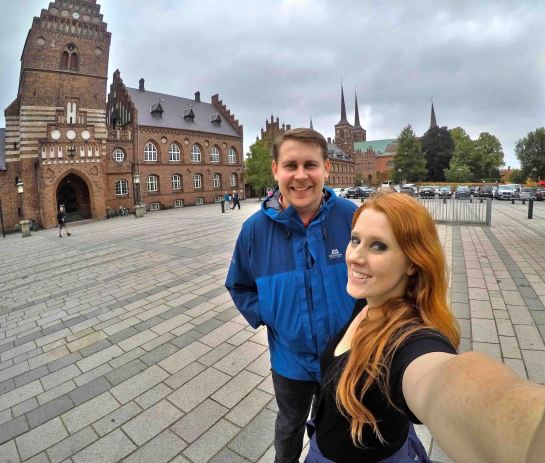 It is a beautiful building, however Callum and I grew up in an area where suburban houses were all built in similar red brick. It didn’t take away from the vastness of the building but it did feel a little too familiar to us, less awe inspiring perhaps. The half-timber houses, painted bright yellow opposite the cathedral interested us much more. We were on the hunt for a small gas canister for our camping stove (having not been able to bring one with us) and thus leading us down through the shops. It was quiet, but people were milling around and there were some cool fruit/veg shops, which sprawled out onto the street.

Finding what we were after we headed through a long avenue of tall trees, through the park and ended up back at the car. It was a flying visit but enough to stretch our legs and get a feel for the place. We continued our journey south towards Rødvig, where we would be spending our first couple of nights in Denmark.

Rødvig is about an hour and a half south of Copenhagen, situated on the south east coast of Jutland. As we got nearer we were taken aback by how flat the place was, used to being surrounded by hills and mountains, it was incredible to be able to see so far across the land. We had changeable weather but my reigning memory is of the sun illuminating the endless green fields and the traditional long and pointy Danish flags, which adorned most houses/gardens, fluttering in the wind.

The closer to our destination we got the sparser the houses were, the roads turned into single track lanes, cutting between the fields at right angles around the corners, often the roads were lined with trees on either side, creating a very picturesque scene. We arrived in a small village, we were staying in a little barn conversion attached to a small farm – they grew Christmas trees and had 4,000 to plant over the couple of days we were going to be there – they also traditionally press apples, which seemed to be growing everywhere, to make juice and, in the son’s case when he is back from university, cider! 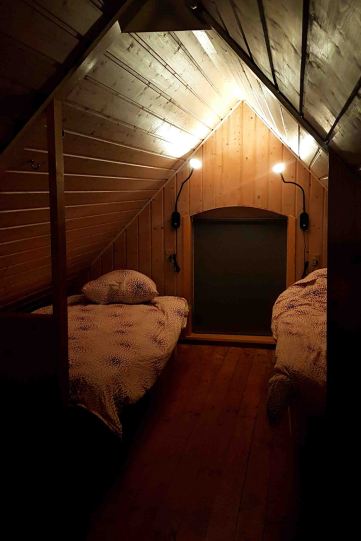 The place was exceptionally quaint, a kitchen at one end and a big wooden table at the other with a few soft chairs, the lights filled the space with a warm glow and it had a very homely feel. Upstairs was one open room, it is considered a ‘bunk house’ for up to four people, with two beds at either end. We chose the end with the window that overlooked the cliffs and sea. It was pine clad and had that awesome wooden smell – I kinda fell for the place!

After getting sorted we decided to head out for a walk as it was a beautiful evening. Five minutes up the road we parked up at the Stevns Fyrcentre (lighthouse) and embarked on the clifftop walk along to Stevns Klint, another UNESCO World Heritage Site. It was a beautiful evening, the clouds sat high and unassuming in the blue sky, moving quickly and tinted yellow in the evening light and the evening, although bright, was getting to that time where everything was looking a little more golden. Rays of light fell upon the ploughed fields, accentuating the lines of indented earth.

Following the trodden track on the cliff edge we skirted numerous fields, making our way south, every now and again we would enter a patch of trees – the climate is very similar to ours and subsequently the flora and fauna felt very familiar but different somehow, tinged with the excitement of being somewhere new!  There was usually a patch of shrubbery between us and the edge, looking over which you found yourself staring straight across the vast expanse of the Baltic Sea.

The sea was a deep blue, reflecting the colour of the sky but not an exact match in shade. White gulls were scattered across the water, riding the gentle swell, every so often they would all rise into the air, catching the wind, before settling back down on the undulating water. A huge bird of prey was circling, riding the air currents above us – it was a stunning golden brown colour in the light and absolutely huge! Sadly, we couldn’t see enough detail to identify exactly what it was.

We chatted away as we walked, but couldn’t help stopping to admire the view at every break in the trees/shrubs – there is something great about looking out and only being able to see deep blue water, as far as the eye and see, right to the horizon. As the cliffs jutted out ahead of us we noticed the chalky white faces pockmarked and rough, lots of visible angles where chunks of rock had broken off or crumbed away into the water which lapped relentlessly at their base. Small trees and other flora created dark shadows on the otherwise light surface of the chalk.

We noticed it earlier on our walk, balanced on the cliff edge, a small white church in the traditional Danish style, nestled in some trees and overlooking the Baltic Sea – Højerup Gamle Kirke. As the cliffs eroded, a large section of the church had toppled into the sea and had to be rebuilt, we arrived at the church and found the stairs leading us down the cliff onto the shore below – we had reached Stevns Klint.

Heading down the steep steps we could hear the repetitive rumble and crash of the waves colliding with the barrier of boulders which ran along the length of the small bay. With large rocks and boulders strewn everywhere, combined with large chunks of chalk, it wasn’t an easy stretch of beach to navigate but it was fun jumping from rock to rock, exploring the nooks and crannies. These chalk cliffs are renowned for fossils and I was determined to find one before the night was through! It didn’t take long, and technically it probably wasn’t a real fossil, but I found a perfect indent of a shell (with a little shell matter left behind) in a block of chalk that had tumbled between two huge boulders – it was a good enough find for me, and I was probably white enough from clambering around and wiping my hands on my trousers without searching for more!

The day was fading, the clouds had filled the sky, the light had turned silver and the sea a grey-green colour. It was still bright enough to see everything clearly and as we sat on a large rock, soaking up the atmosphere of the place it didn’t take long for us to notice the slinky black bodies and tails of two creatures sulking in and around rocks.

Making their way through small crevices, we watched them swimming in the water on the other side of the barrier, dive down and disappear only to come back into view on our side of the rocks again. One of them (distinguishable by a bald patch on his tail) was obviously a much more efficient hunter as he would come back through with a huge crab hanging out of his mouth. Trotting across, around and under the rocks, tottering past us and then disappear into a dark gap, obviously a nest/burrow where he planned on devouring his catch.

They didn’t seem at all bothered by us and at several points in the evening curiosity obviously got the better of them as a small black face would appear between the rocks a mere metre away from us. They were characterful critters and amusing to watch as they would squabble, chase each other around, head back out into the water and then shake off on the way back in. As the light started to fade and the sightings became less frequent we decided it was time to head back, dragging ourselves away from the stunning view to ascend the steps and start our walk back along the cliffs.

It got dark very quickly and for the remainder of our walk head torches were a necessity. Apparently it is easy to keep a good pace when there is nothing to look at, as the walk back took half the time. Back through the woodlands, the head torch lights would illuminate a strand of spider webbing drifting across the pass; thankfully we were able to avoid most of them, but not all. Along the field edge the footpath was now alive with beetles, spiders and harvestmen. Big enough to catch our attention, we were able to sidestep and avoid squashing them.

When we weren’t watching our feet we could see the lighthouse getting ever closer, its deep orange light, emitted in about 6 or 7 distinguishable bars, prowled across the land and the sea, dimly exposing whatever lay beneath it. In no time at all we were back and Stevns Fyrcentre now towered above us again. We headed back to the house, and as we sat at the table tucking into dinner, feeling cosy in the warm light of our accommodation, it was odd to think that only that morning we were in Manchester Airport waiting to leave – we had already seen and experienced so much in our first day in Denmark!