Our day started bright and ready to head to the coast where a causeway crosses the Wadden Sea to the small island of Mandø. The small country roads were quiet as we drove out of Ribe, and the further out we got the more greenery there was surrounding each house we passed. The sky was veiled in a thin layer of cloud, everything was bright but awash with the silvery glow, it was a subdued and calm morning.

We left our car on the mainland and decided to head across the causeway on foot, we weren’t sure how high high-tide would be and we decided to play it safe and avoid getting stuck on the island until the water levels dropped again. We decided to walk the causeway as far as we could and then turn back as and when, just enjoying the stroll and our surroundings. The Wadden Sea is a UNESCO World Heritage Site, an area of mud-flats which is incredibly rich in biodiversity; hundreds of thousands of waders, ducks and geese use the area as a migration stopover or wintering site, it is also a rich habitat for gulls and terns.

The rough and uneven gravel track lay out before us, water pooling in every nook and cranny, large puddles covered vast stretches of the rocky surface, none however were too deep to navigate past or through. Either side of the road were the mud flats stretched out, saturated and glinting, reflecting the silver of the sky. Pools and streams made themselves visible, shining a pale blue against the earthy surroundings. Grasses and reeds, all of which had been flattened by the most recent high-tide, grew in large tufty patches adding splashes of intense colour to the scene.

We trundled along chatting in our usual fashion, still finding this flat country very novel. Every step would pass over shells of varying size which had got caught on the road and left behind by the sea. I found a cool gnarly looking oyster shell and a rather large, orange/black crab lurking in one of the pools. As the morning progressed the thin layer of silver started to dissipate, the clouds were breaking up and the sun made an appearance, its weak rays falling listlessly upon us. The wind was still blowing which kept the clouds at a good speed as they made their way across the sky. Every so often we would pass a smattering of spindly trees, completely bare and growing out of the mud, looking rather sad and dejected about their situation.

The bird life was going about its business, completely unhindered by our presence, adding life to our quiet surroundings. Herons swooped past, flapping their large pterodactyl-esque wings silently. Small white bellied waders picked their way through the silty, sandy surface, their feet sinking in with each step. Occasionally they would find something good and peck vigorously or fly past us, just a foot or so above the ground, to see if there was anything better on offer on the other side. The usual gull silhouettes were visible high above us in the bright sky and small birds flitted past familiarly.

We got a fair distance across before deciding to head back, on our return journey a murmuration, or ‘black sun’ as it is known in Denmark, flew up casting an immense shadow on the sky. Flying this way and that, creating incredible shapes in the sky the birds would head away from us, almost disappearing, only to switch direction and come back. The show lasted for 5 minutes or so until, all at once, they descended back to ground level and they silver clouds were unblemished once more. Once of those cool moments where we were in the right place at the right time!

The day was still improving and by this time the sun was properly out, deciding to film a little of the scenery we perched ourselves on some rocks while the camera was rolling. Poking around by our feet, we came to realise that all the road edging, with all its rocky nooks and crannies, was offering shelter to crabs, a lot of crabs! There was so many, of all different colours and sizes – some of them were the tiniest baby crabs I have ever seen and it was great fun unearthing them and watching them scuttle quickly to the next available crevice.

Getting back to the car we made our way back into Ribe for one last walk around before heading on to our next adventure. As it was a Sunday the town was very quiet, a lot of the shops were closed and it was a very chilled and peaceful place to be. We wanted to climb the tower of Ribe Domkirke but unfortunately it was closed for maintenance, so we had to make do with the ground floor.

We followed the rough route of the Night Watchman’s tour we had done the previous evening, it was nice to be able to see all the little details that were mentioned in daylight. After a couple of ice creams by the river it was time to move on, saying goodbye to Scandinavia’s oldest surviving town.

It took a little driving to find the right spot, and as we got closer to the forests we would drive through large patches of trees, giving us a good taster of what lay ahead. Finding somewhere to park the car, we packed our bags and headed off for a night of hammocking. Following a narrow trail into the forest we left civilisation behind in search of a good place to spend the night. It was obvious the forest is used for a whole host of different activities as paths and tracks of varying size and structure criss-crossed their way through the vast expanse of flora.

Small, windy trodden paths meandered through the deciduous trees, our bags getting caught on the lower branches often! Larger, straighter tracks ran boldly through the rows of trees, obviously having a formal use in the plantations either now or in the past. We made our way, picking the paths leading in the approximate direction of the coast. We knew there would be a fair amount of sand dunes between the trees and the water but it gave us a starting direction and something to head for.

As we walked we noticed the density of the trees altered, along with the species – it was wonderfully varied. We would pass lumpy, mossy forest floor, the spaced out trees allowing the light to filter down onto the green canvas below in a dappled display. Some areas would be packed tight and tremendously dark, the outer trees having spindly branches reaching the floor and making entrance near impossible. Other spaces would have a mix of the plantation trees and natural regen deciduous trees growing amidst the tall straight trunks of the spruces and pines. At one point a huge hare spotted us and made a dash for some cover, its long and powerful legs making easy work of the debris on the forest floor. 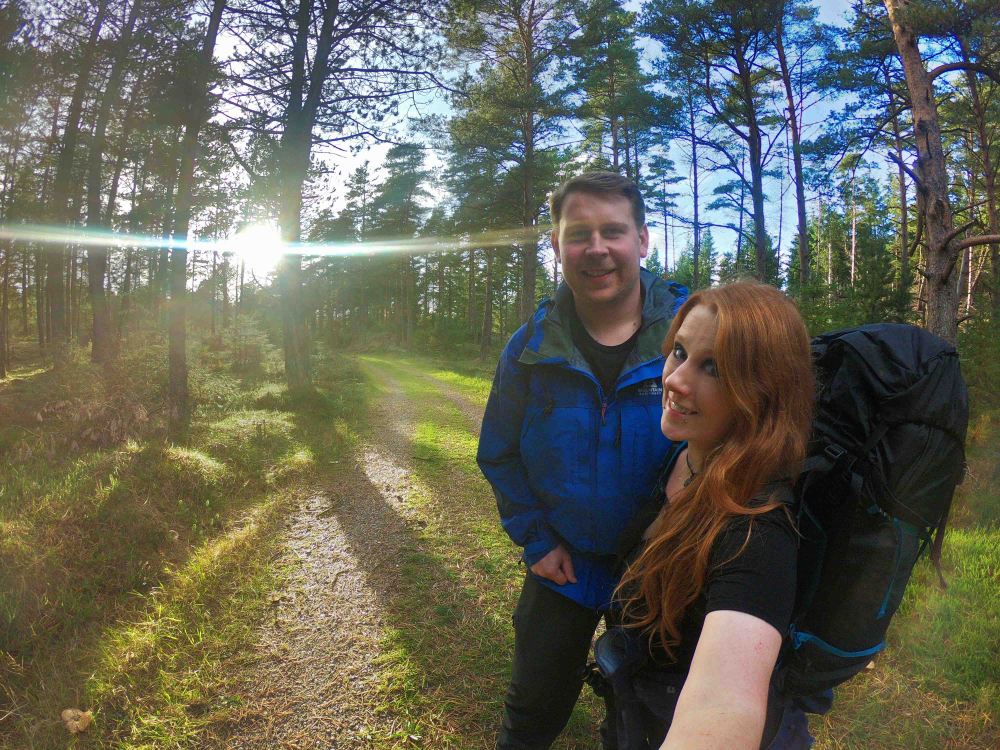 We walked past a lot of amazing hammocking spots, however we didn’t feel like we had ventured far enough away and so we kept walking. The wind huffed and puffed, rolling the clouds across the blue sky above us. As evening descended, the clouds were edged in a golden light as they tumbled en masse over the tops of the trees. We reached the end of the forest and the dunes undulated endlessly ahead of us, we had reached our furthest point walking west and were ready to find a good spot to sling our accommodation for the night.

Having exited the forest we realised how sheltered we had been, the wind was strong and cold and it didn’t take long for us to put on an extra layer each. We made our way back in, aware that we would soon be losing the daylight but luckily it didn’t take long for us to find the right spot. We found a small clearing with some well-spaced trees, tucked back and hidden from the small path that we were originally walking on – we got to work and in no time at all the hammocks were up and we were sat under my tarp boiling up some noodles for dinner in the fading light of dusk. 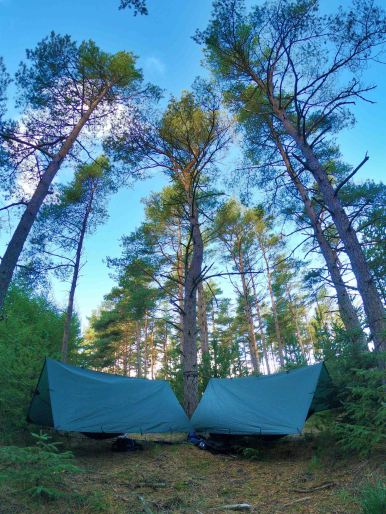 It was an incredibly windy night, we could hear it howling above us, waiting for a gust to reach us and catch the tarps which would flutter violently as a result. The trees would sway, creaking prominently in the quiet of the night, unable to remain still against the power of each gust, the movement created a constant patter of needles and cones falling onto our tarps. A couple of times in the night a peg came loose, which was easily fixed with a heavy log on the guy line, we were also subject to some thunderous rain showers but thankfully we knew nothing of this apart from the noise, staying completely dry and warm in our hammocks.

Every so often the clouds would part, allowing the moon to shine brightly through the boughs above us, casting awesome shadows on my tarp. And although not exactly a peaceful and idyllic night’s sleep, it always feels great to be out, right at the very heart of it, experiencing all that nature and the weather has to offer.