Waking up leisurely and enjoying that ‘nothing to do because we are on holiday’ feeling meant we had a slower start to the day. However it wasn’t long before we were out of the apartment, ready to explore Kiev. Just a 10 minute walk from our apartment was the National History Museum, so we decided to make that our first activity of the day. 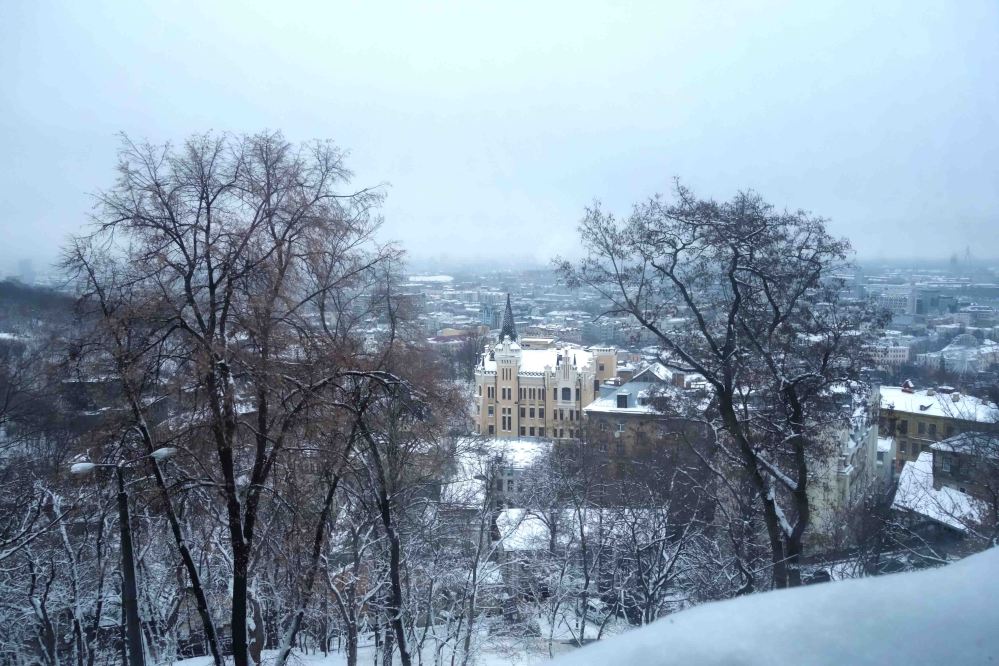 The cobbled streets were just as icy as they had been the previous night, so we ambled with care looking around at our unfamiliar surroundings, gripping each other’s hand a little more tightly every time we slid on the ice. Entering a park, it appeared to us like a blanket of undisturbed white, the occasional tree contrasting starkly against the snowy backdrop, their branches weighed down by the weight of the snow resting languidly upon them. All of a sudden, and pretty much simultaneously, we noticed the beautiful dome of St. Andrew’s Church poking out over a line of trees. Having never really experienced this kind of architecture, we were both taken aback that we had just stumbled across such a beautiful building. 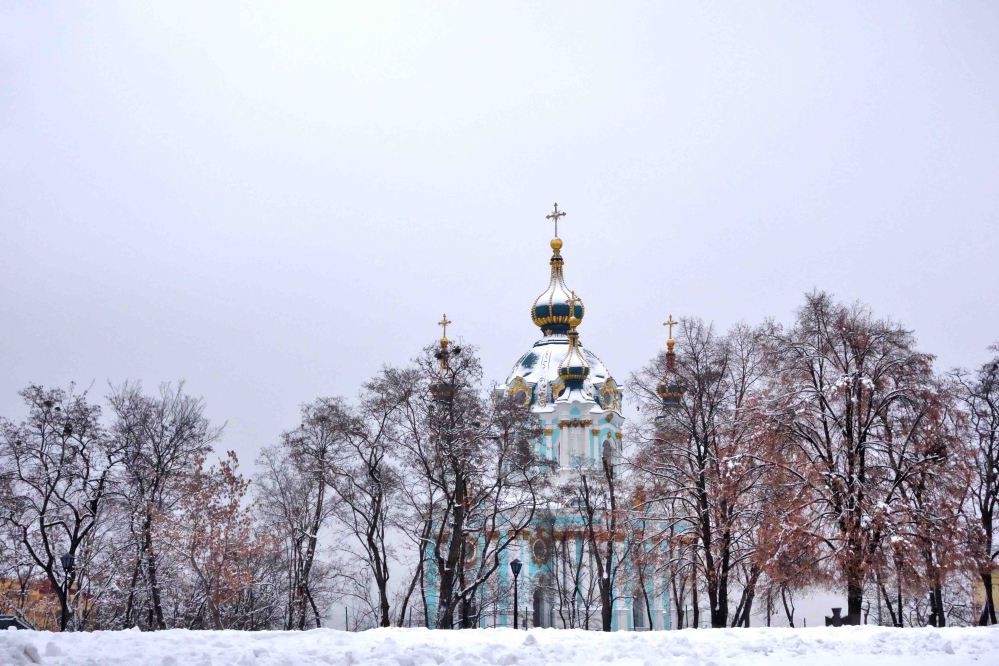 A couple of hours exploring the museum was a great way to start the day, it had a calm and quiet atmosphere and gave us a great overview of a country so new to us. It housed thousands of extremely well preserved artifacts from throughout the ages of Ukrainian history – old spear tips and other weapons, ancient jewellery and religious artifacts, traditional clothing and so many other things it would be impossible to mention them all.

There was a huge old carriage which had been expertly preserved. A complete timeline of the currency depicting how it had changed over the years, cases full of beautifully detailed notes dating back hundreds of years, right up to the current design. The exhibits were engaging and eye-catching, one particularly macabre room caught my attention and caused me to linger on the artwork hanging on the walls.

Moving through the museum we came to exhibitions detailing Ukraine’s more modern history; stories of the genocide, information about its independence and, even more recently, the political unrest which led to the protests in 2014 and the corrupt government fleeing to Russia. Knowing next to nothing about these events (other than that they happened) it was extremely interesting to learn about it all and incredible to think just how recently it had all taken place and yet it has already taken its firm position in the history books.

We left the museum full of knowledge and decided to head in the general direction of the beautiful church which had caught our attention earlier in the day. With the muffling properties of snow the whole place had a very quiet, almost docile feel to it. Rounding the corner we found ourselves right outside St. Andrew’s church. The building’s turquoise outer appeared bright and vibrant against the white clouds behind. The domes were a deep teal decorated with gold – there was one large surrounded by 4 smaller all topped with gold crosses. The general design of the building made it appear striped on the outside and it had a large staircase leading up to the entrance. Unfortunately restorative building work stopped us from entering but it was stunning and we made sure to take lots of photos.

St. Andrew’s Descent starts by the church and curves its way down the hill behind it. It is a steep little cobbled road with the pavements made from smooth yellow tiles, covered in varying amounts of snow it was incredibly slippery, the steepness only added to our trepidation. The pavement had lots of ridges built into it; obviously sliding down in snowy weather was a common happening and they were very useful! Making our way down through the market stalls which lined the pavement, the owners were friendly and chatting with us as we passed by, eager to show us their wares and let us know they were happy to take any currency. The buildings rose up steeply from either side of the road; one of them was a fancy turreted building which turned out to be the castle of Richard Lionheart (although we only found this out later!)

After strolling down one side and back up the other we headed in the direction of our apartment, but instead of returning home we continued past and ended up at St. Sophia’s Square. A Christmas market lined the main space with St. Sophia’s bell tower stood proudly at the top and St. Michael’s Monastery gleaming in the light at the bottom. This market was almost solely for food vendors and as we walked between the stalls we were engulfed in incredible smells that were drifting out of the wooden huts. Even in the middle of the day the Christmas lights gleamed brightly, the huts were all decorated and huge snowflakes ran the length of the walkway overhead.

We walked the length, seeing what was available and deciding what to have, stopping every so often to admire the golden domed wonders which periodically grabbed our attention. Finding veggie options took a little longer, it seems the cuisine is rather meat heavy – an opinion which was confirmed when one guy asked Callum if he wanted any vegetables with his, whilst pointing to potatoes sliced and filled with a slab of bacon! With our chosen delicacies in hand, we found a quiet spot to perch and eat, watching the world go by as we did. It was a cold day, much the same as the previous night, and although we weren’t finding the cold a problem it was lovely to get some hot food inside of us! 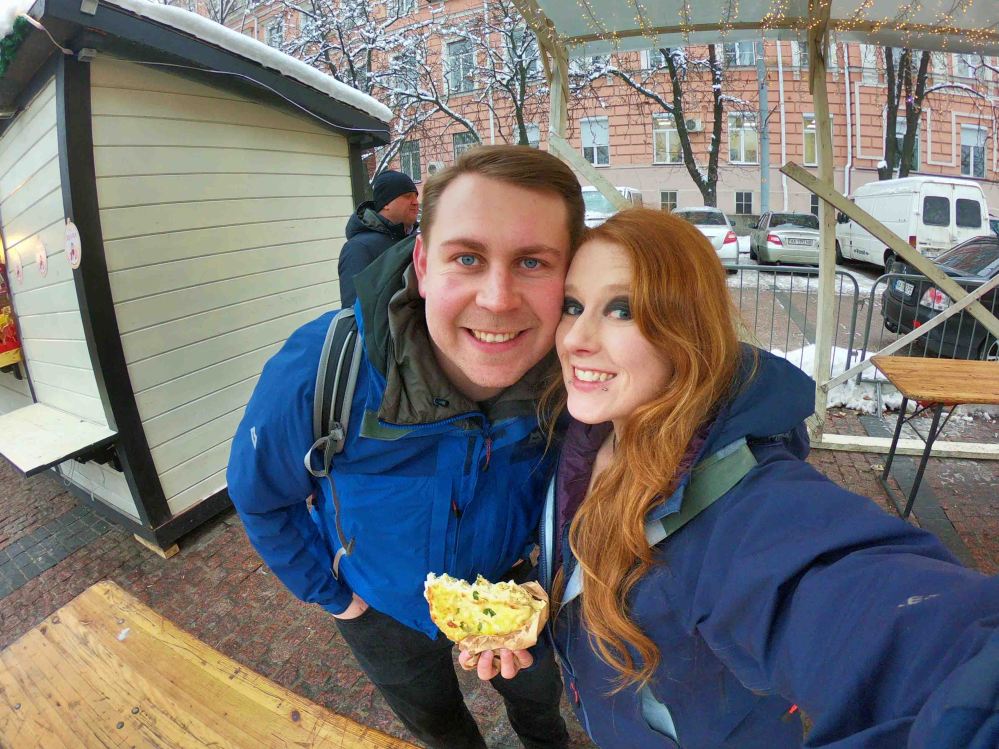