It was a cold, crisp morning as we made our way through the quiet streets to Independent Square. It wasn’t quite full light and the clouds were dappled in the pastel hues of the rising sun, hidden deep behind the clouds. We were two of a small group that gathered and after a quick passport check we were on the minibus and heading out of Kiev. Leaving the city we drove north towards the border and our destination – the Chernobyl exclusion zones.

As the scenery blurred past the window, we drove through a number of small towns and villages, we drove past a little market, the local people milling through the stalls which were selling fruit and veg, thick winter coats and boots, and lots of other things that weren’t so noticeable as we drove past. Our surroundings got increasingly rural the closer to our destination we got. We passed by swathes of forests, the usual endless trunks disappearing into the distance, the trunks and needles looking especially dark against the bright white snow.

During the journey we were shown a couple of documentaries about the nuclear disaster. I have to admit, our initial reasons for visiting were probably born out of a slight macabre fascination for the place. But gaining more knowledge, realising the sheer amount of people affected and learning of those who gave their lives to literally save the world, I can safely say that our visit became more than a morbid curiosity. 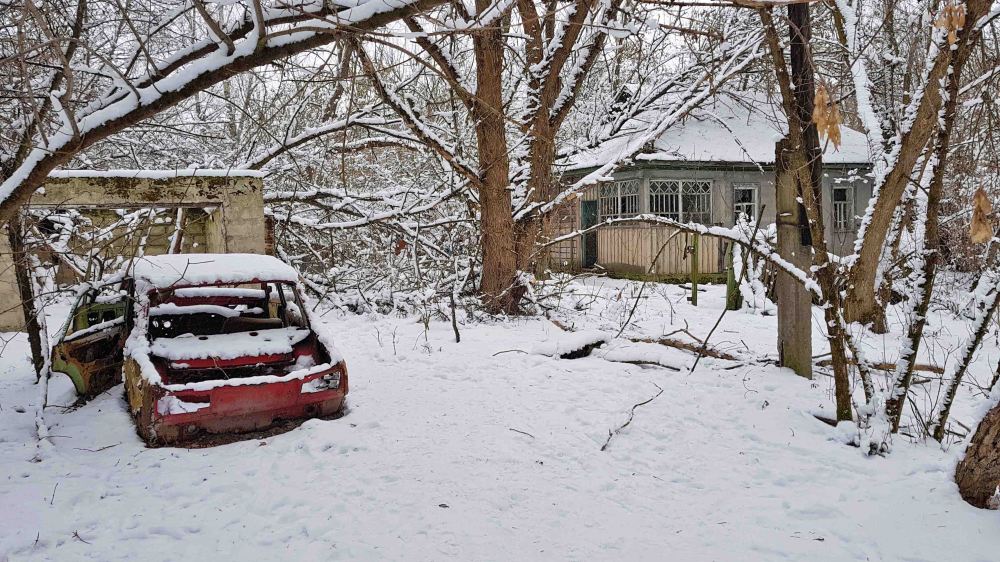 The fire-fighters who were the first on the scene tackled the blaze unawares of the dangers they put themselves in, unfortunately all of these men died from radiation exposure soon after, some within just a few hours. Over the course of the events numerous methods to cool reactor number four and minimise damage were tried. One method involved minors being transported in from across the USSR to dig under the reactor, the idea was to fill the tunnel with water and create a cooling chamber. 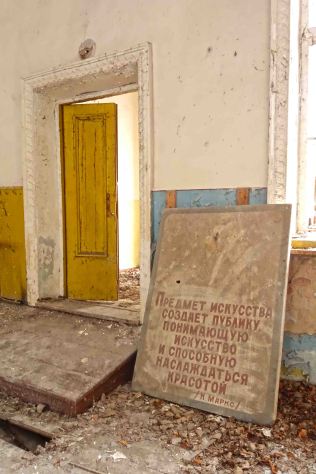 These minors would dig for 3 hours at a time, with little to no protective clothing, before swapping with another team. It was so hot under ground that they removed their face masks, drenched with sweat meant they make it extremely difficult to breathe. Their drinking water came from an open trough and every time they entered and left the site their bodies would have been blasted with incredibly strong radiation. In several days they had done the same amount of work that would usually be completed in several weeks.

In all hundreds of people were drafted in, in various capacities, to help tackle the explosion. At one point the temperature of the reactor started to increase posing the risk of another, larger, explosion. It was suggested that if this second explosion had happened most of Europe would have been uninhabitable, in the same desolate condition as the 30km exclusion zone.

In what felt like no time at all we were approaching the first military checkpoint of the day, we bundled out into the cold while a severe young soldier in uniform scrutinised our passports. While we waited we were kept entertained by friendly dogs that enjoyed the attention we were happy to give them, I presume strays but they were obviously well looked after by the people that work there. Back in the bus we trundled on down the snowy roads until we came to our first stop off, the village of Zalissia.

We made our way through the trees and into the small village. As we walked through the powdery snow there wasn’t a single other sound than our padding footsteps. The thick blanket of snow muffled all noise, adding even more isolation to this abandoned little village. The first building we came across was the old village market, or general store, a few of the letters remained above the open door. The white outer of the building looked grubby against its white surroundings. Not much remained inside, stepping over the debris on the floor we had a nosey around. The green paint was peeling off the walls and all that was left was the old fridge/freezer counter in the middle of the room.

As we continued further into the village we could see the empty shells of houses dotted sporadically between the trees. Since the disaster, and the removal of nearly all human interference, the exclusion zone has become a wildlife haven and the trees are a testament to this. Where there were streets and paths there is now only woodland, the village is being taken back by nature, really quite rapidly. A few more stray dogs approached us as we wandered through, once again friendly and expectant of attention. 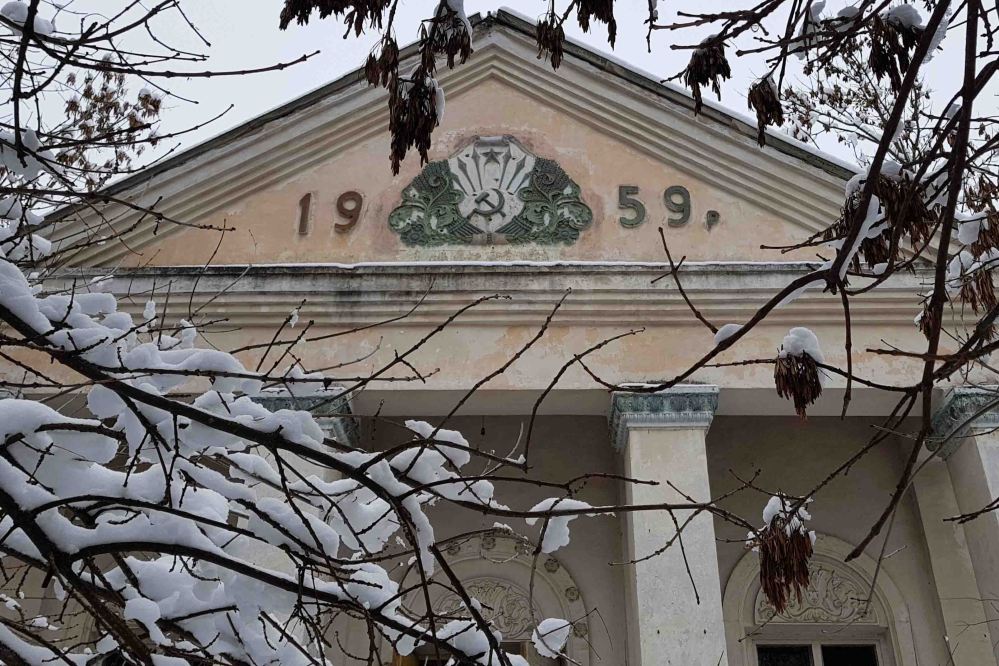 We approached a large building, its four large columns adding grandeur to the entrance, above which sat the hammer and sickle sign of the Soviet Union. This was the old town hall – no glass remained in the doors and as we walked into the foyer of the building we had to watch our footing as large sections of the floorboards had fallen away, showing the foundations beneath. We moved into the main hall, a large rectangular room with a stage at the far end, above the stage was a red banner adorned with a communist, soviet slogan. The room was decorated but in a basic way, there are areas of intricate detailing around the stage and ceiling but the paint is peeling, showing signs of the on-going degradation.

Continuing past more tumble-down buildings amongst the trees, our attention was grabbed by the shell of an old car sat on what I imagine was a driveway (couldn’t really tell due to the snow). The car was crumbling away, much like everything else, the paint was peeling, no engine remained under the hood and no tyres were left to keep the chassis off the floor. Back in the day this car, we were told, had an incredibly long waiting list – people waited a decade or more to get their hands on one of these. Our guide’s grandfather was on a waiting list for 12 years before he finally owned his. I imagine it was much the same for the family that owned the car sat in the snow in front of us, and after all that waiting… they had to leave it behind.

Inside the house we saw the same signs of decay the rest of the village had displayed. Walking across the rooms, avoiding the collapsing floorboards, we could see elements of the lives that were lived here. Children’s books were strewn across the floor of a brightly painted room, stuffed toys sat forlornly on the windowsill. Sheet music was scattered in another part of the house, more books and paperwork littered the floor around it. These items made the human impact of this event far more real – normal things you would see in a normal house, anywhere in the world.

After exploring this little village we made our way back out of Zalissia, retracing our steps through the thick white powder which covered the ground. A light breeze nudged snow from the branches, which fluttered down upon us as we walked through what is left of the village. It is being swallowed by the woodland, bit by bit and the decaying structures lay behind thickets of trees. With the snow hanging heavy on every branch I thoroughly enjoyed the juxtaposition of the ‘winter wonderland’ and the isolated, abandoned village lurking within it. 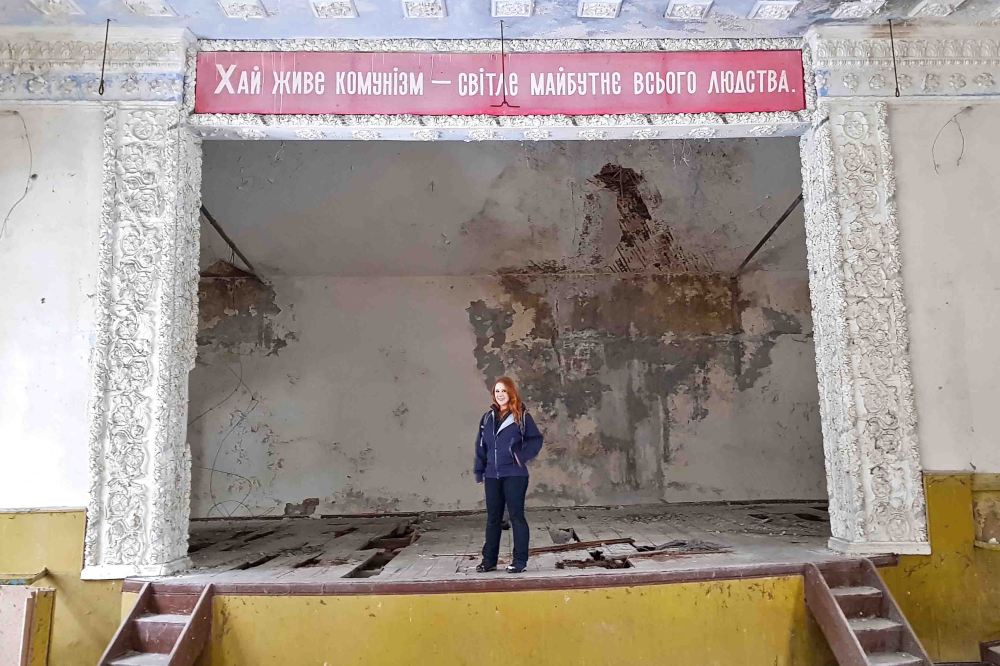