The large sign for Pripyat town stands bold and alone at the side of a long empty road. Its modern design juxtaposes against the surrounding area, full of trees and nothing more. The thick blanket of snow that covered the land while we were there only added to the solitude of the place. The sign is situated on a junction by the Red Forest. After experiencing the extreme radiation poisoning, the trees in the area turned a rich shade of red, resulting in the areas relatively new name.

Just across the road, on the edge of the red forest, yellow biohazard signs have been placed to mark the area of intense radioactivity, their stark colour looking vibrant against the muted snowy background. It is no surprise that here lay another impressive hot spot, the crazed beeping of the dosimeters started up again as the numbers increased rapidly. Certain spots on the ground offered up much higher readings than others, and we played around measuring the difference 50cm was making to the reading, an industrial 2 carriage freight train lumbered past on tracks we didn’t even realise were there. It grumbled past slowly disappearing off into the trees, the sight and sound of it being swallowed by our snowy surrounds. 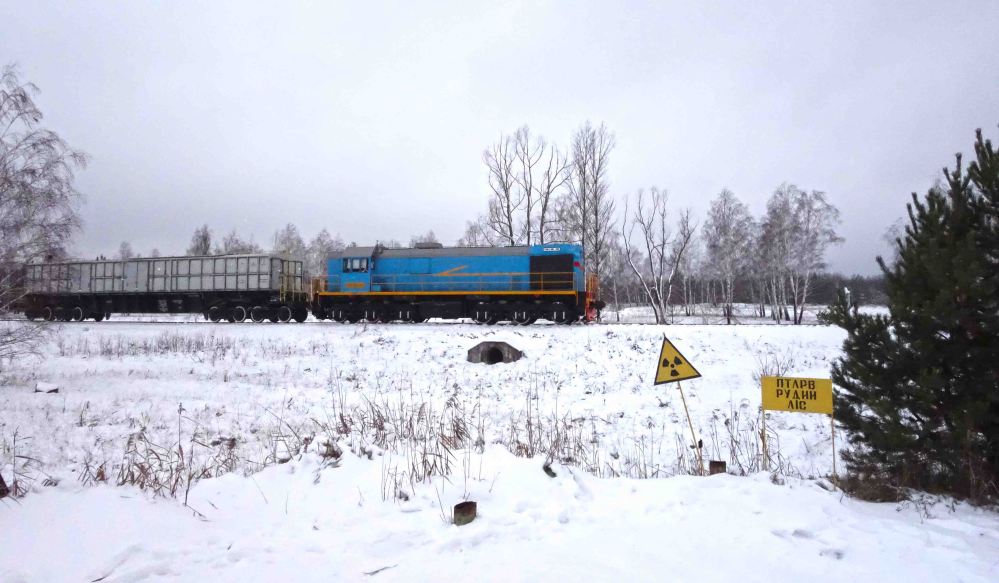 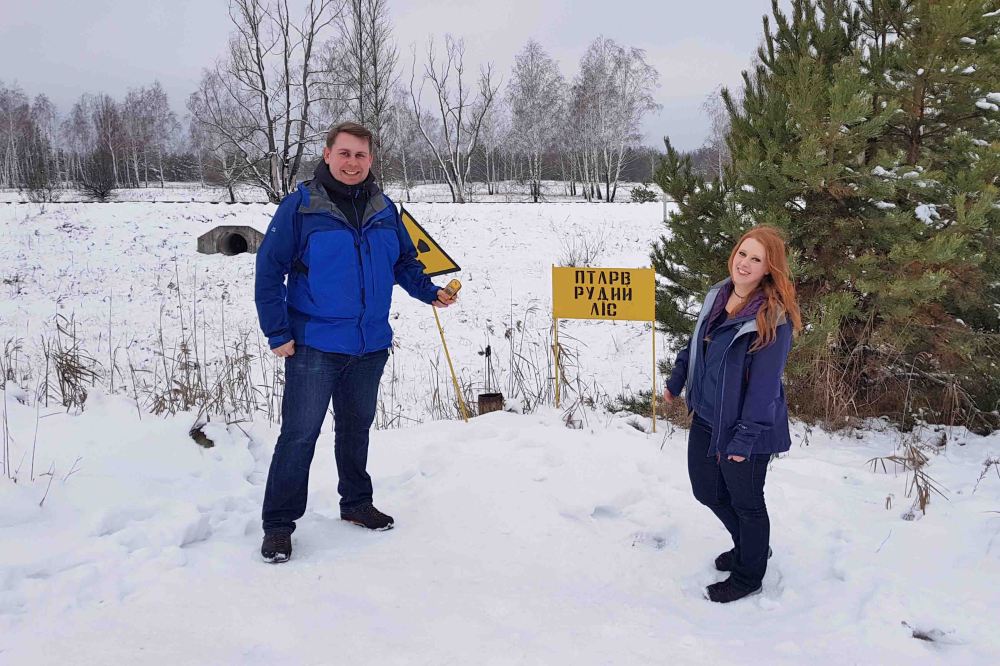 The road into Pripyat was another long, snowy and rather lonely looking road, as we neared our destination buildings started poking out above the trees that lined the way. Once again it was obvious that without human intervention nature was taking back the area with rapidity. We left the minibus on the outskirts of town and made our way in on foot. The undisturbed snow crunched quietly under our feet as we trod a course through the remains of this once thriving place. 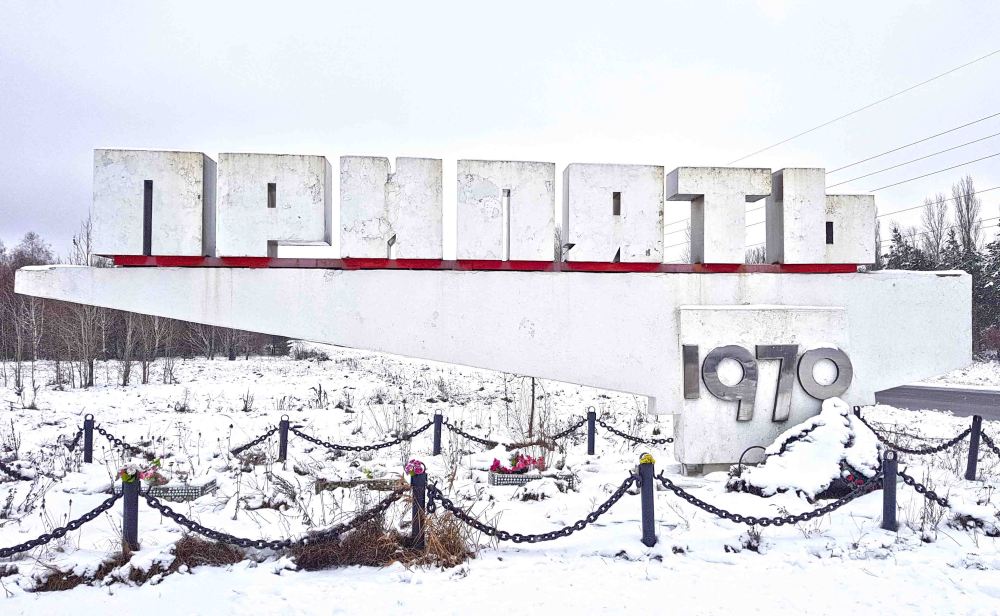 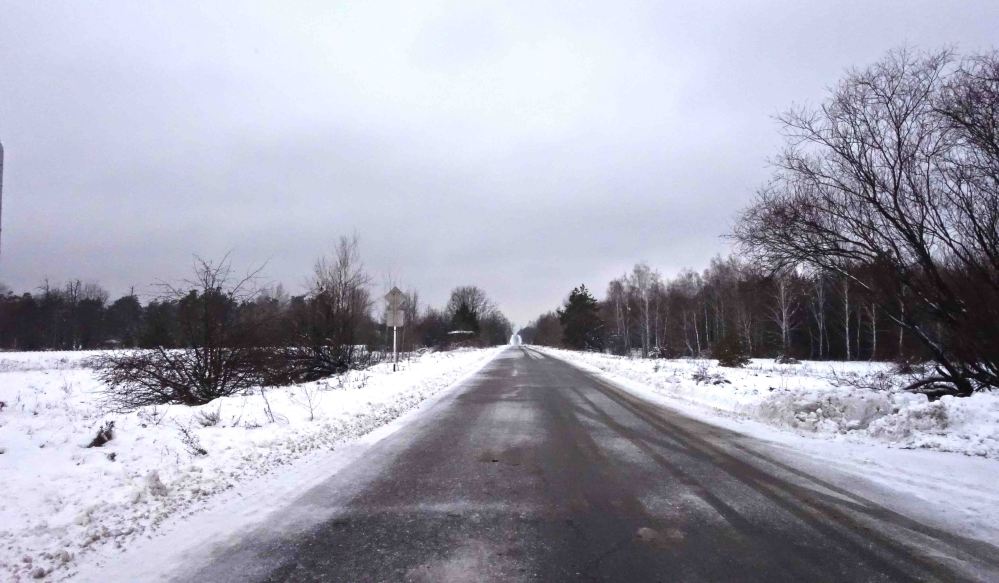 Chatting as we walked, we suddenly found ourselves in what felt like quite a central position within the town. Large buildings seemed to edge an open space, one was a hotel and another was a supermarket, the first supermarket in USSR. These abandoned buildings had no windows, the plaster was crumbling from the outside walls and what was left of the white painted exterior looked grubby against the pure white backdrop of the day. We went to have a nosey in the supermarket, the aisle signs still hanging from the ceiling but only debris remained beneath them. 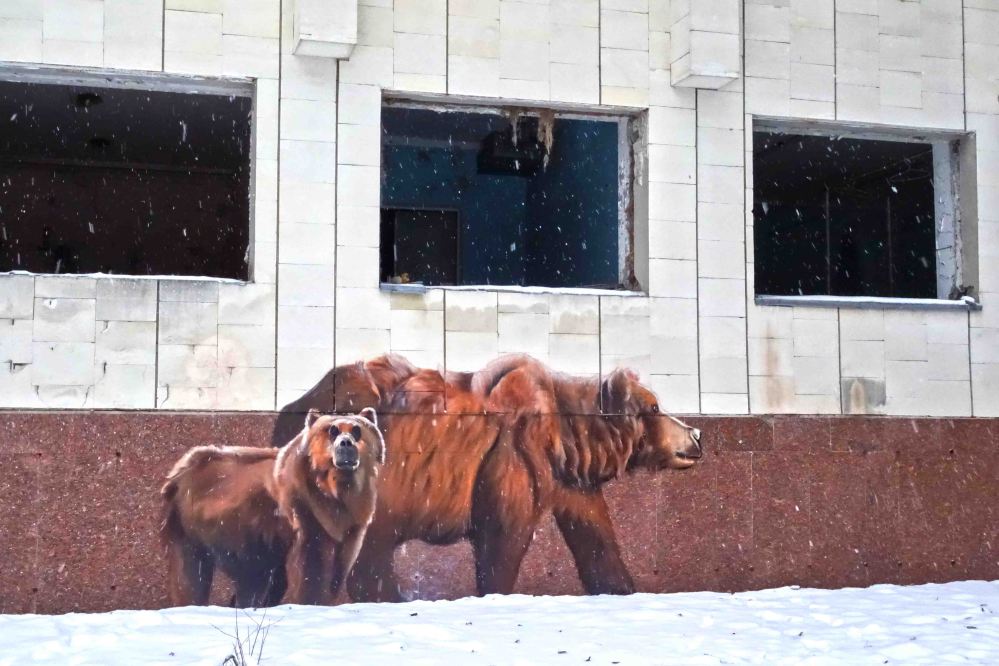 Continuing further into the town on foot allowed us to catch small glimpses of what went on here, on the edge of a concrete planter sat an old gas mask, seemingly untouched and covered in a layer of snow, it was an eerie sight in this abandoned wasteland. The various points of interest were pointed out to us as we made our way to the town’s leisure centre. Entering the building we stepped over crumbling interiors and broken glass, a long dark corridor stretched out before us, we rounded a corner and started climbing the stone step. 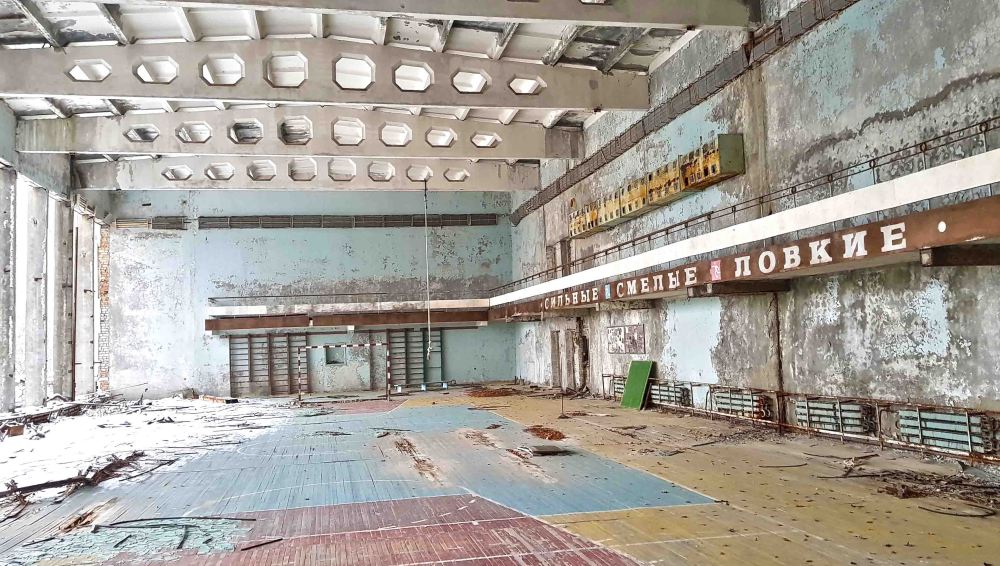 Out of the stairwell we entered the main gym hall, full of light from the wall of windows; it was a large empty space, intact with the court markings still visible on the wooden floor. The trees had grown up tall outside the large windows and it was obvious that the boundary of this building would not hold the woodlands back for much longer.

Further into the building was another room housing a small swimming pool, partly filled with algae infused water; it was dappled in a rich, almost luminous, green and completely frozen over. We made our way through the leisure centre and emerged on the other side of the building. Leaving through a side exit we looked out over the town as we descended the stairs. In the distance we could see the famous ferris wheel peeking out from behind the trees. Once again padding through the thick snow we found ourselves navigating through this winter wonderland of snow clad trees, interrupted every now and again by the ghost of some tired structure appearing before us. 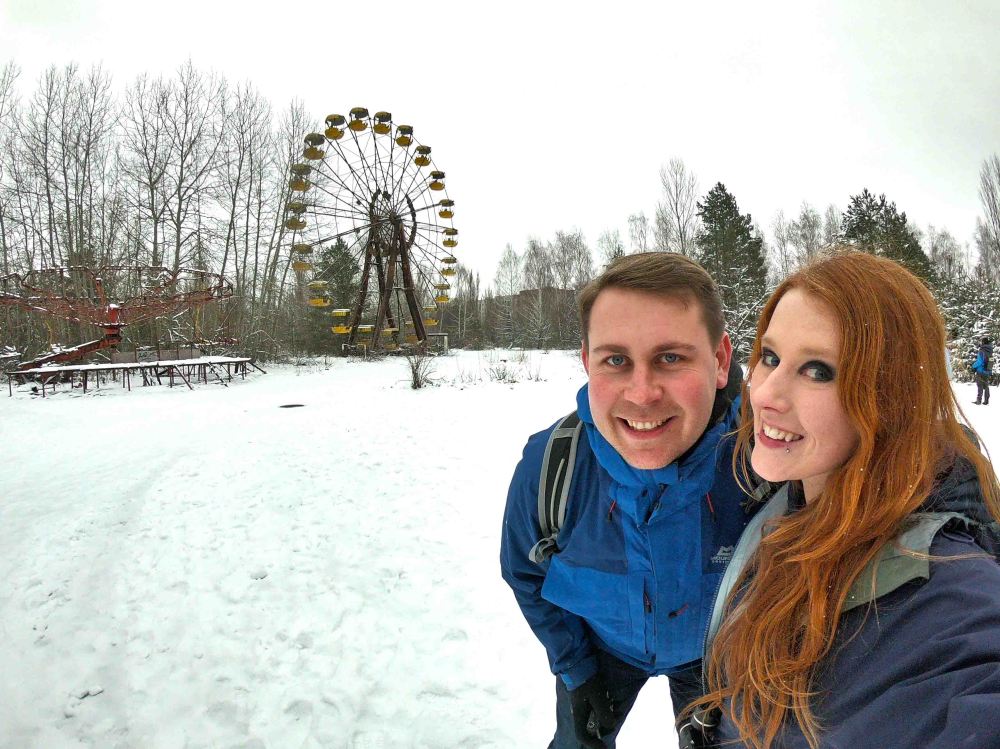 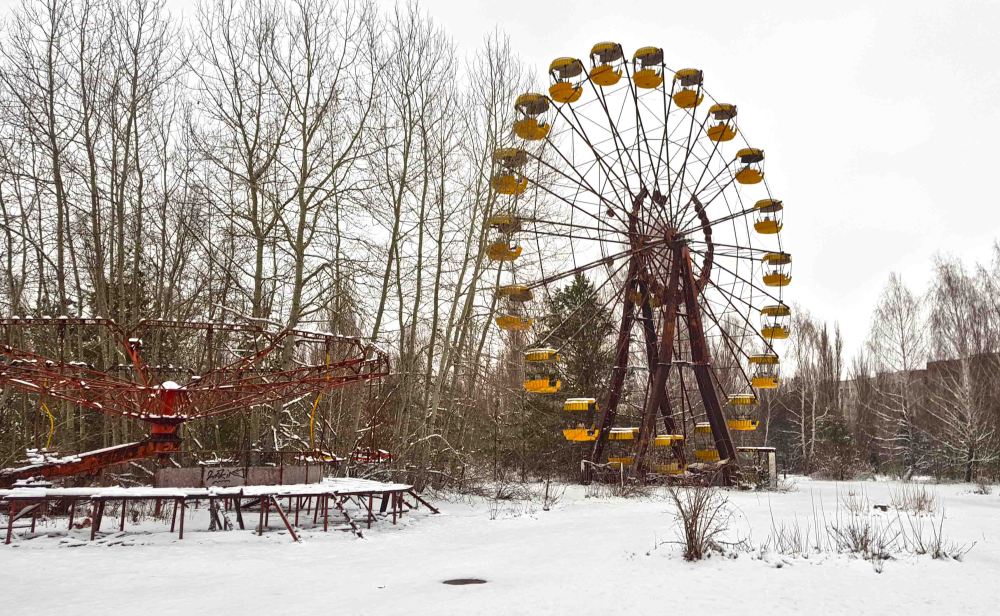 Breaking out into a clearing we had made our way to the theme park, opening day was planned for two weeks after the disaster happened, and so it never actually got used by the inhabitants of the town. The rusting frame and yellow cabs looked bright against the white sky behind; as we explored the area a gate caught in the wind emitted a long, slow creak, adding a certain solemn and eerie quality to the moment. The ferris wheel offered up another insanely radioactive hotspot – one of the cabs sent the dosimeters mad, within a minute the reading had reached over 150.00 microsieverts (considering a safe level is between 0.15-0.3 µSv) and a couple of minutes longer saw the counter reach 400.00 µSv! This was not a place to linger for too long. 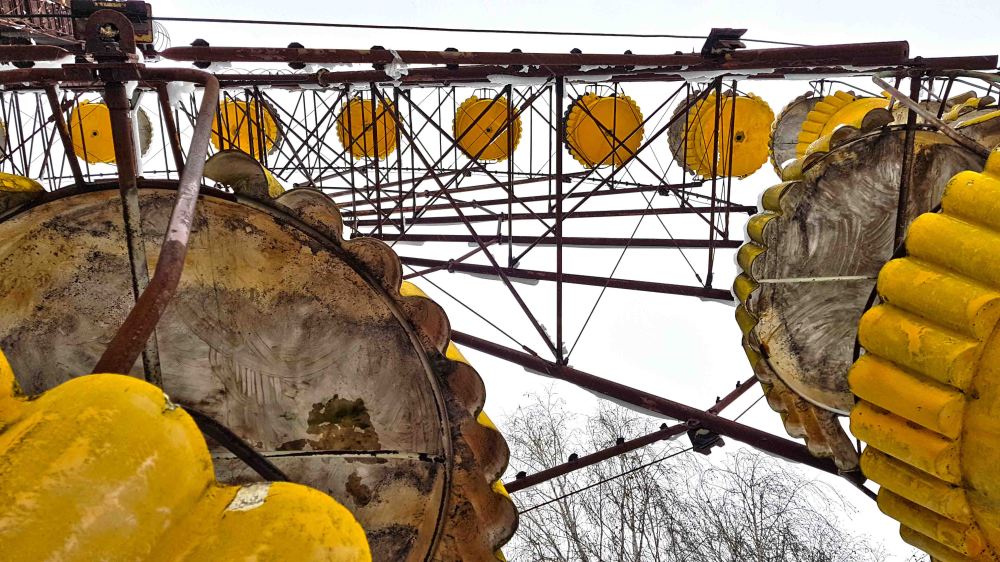 Our exploring took us into another huge building, another larger sports centre. Entering into the darkness and climbing the usual debris covered steps we came out at the edge of the large swimming pool. We had watched a video of Pripyat town (all propaganda, of course) showing a well-manicured place filled with smiling faces. Clips of the new high-end leisure facilities were plentiful, they were obviously very proud of it. We saw children splashing through the water with their parents laughing around them, athletic types diving off the boards into the deep below. Stood at the edge, these images of joviality faded into the tiled depths, the cracked and deteriorated remains illuminated under the harsh blue light filtering in through the tree choked windows. 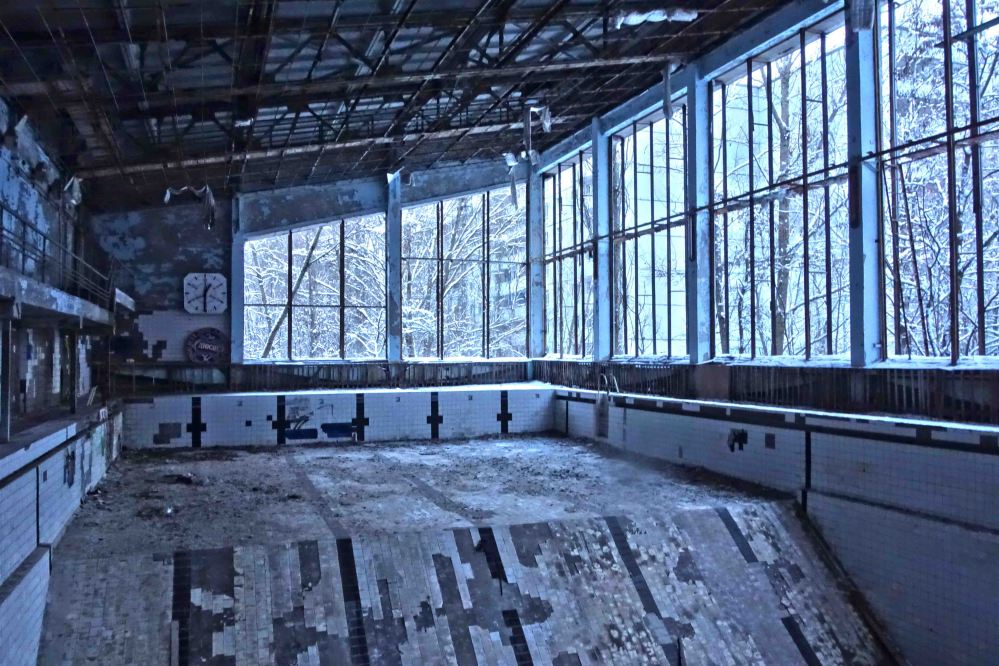 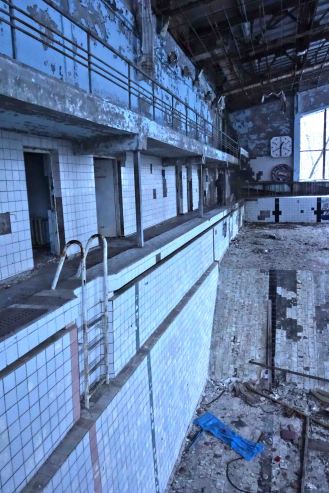 Stepping over a low white wall we found ourselves inside a vast stadium, although without being told it would have been hard to know given the sheer volume of trees now cannibalising the arena. We criss-crossed our way through the young woodland and emerged the other side, walking past several rows of plastic seats and exiting through the prominent entrance. Apartment blocks loomed high above us, closing in all around – these were the basic homes of Pripyat inhabitants, framing the sky overhead while a light snow began to fall as we walked among them. 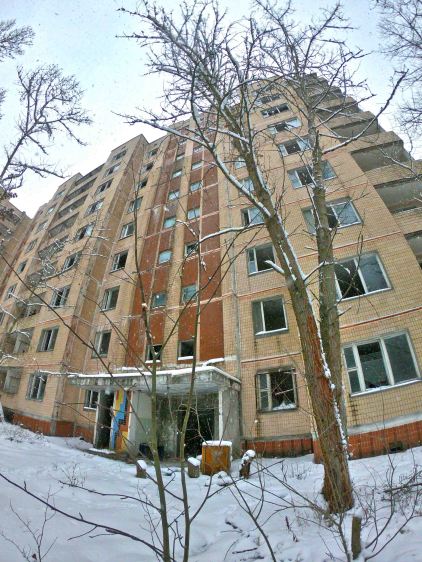 Several rose up side by side, almost exact replicas of each other, the yellow brickwork adding a little colour to a very monochrome scene. Walking through the doorway into the entrance and stairwell of the building we were plunged into darkness, very little light filtered in and it took a while for our eyes to adjust. We started climbing the stairs of the apartment block which were littered, as with everywhere else we had visited, with debris. Up and up we climbed, to the very top of the ninth storey building. 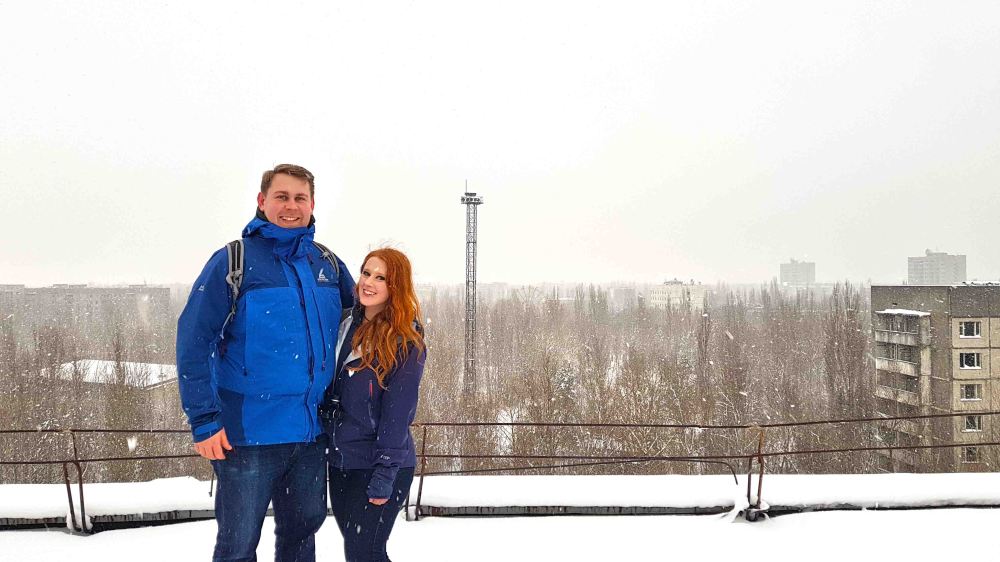 One last, large step-up deposited us out onto the roof of the apartment block; a thick covering of snow remained undisturbed ahead of us. The snow was now falling much more heavily, huge flakes drifted down upon us as we approached the edge of the roof. We could see across the entire expanse of Pripyat town – the large buildings emerged spectrally from the dense tree line, the ghostly form of the ferris wheel clearly visible. The snow-filled sky shrouded the entire desolate town in a pallid veil, a subdued scene of what was once a thriving hub of activity and life. 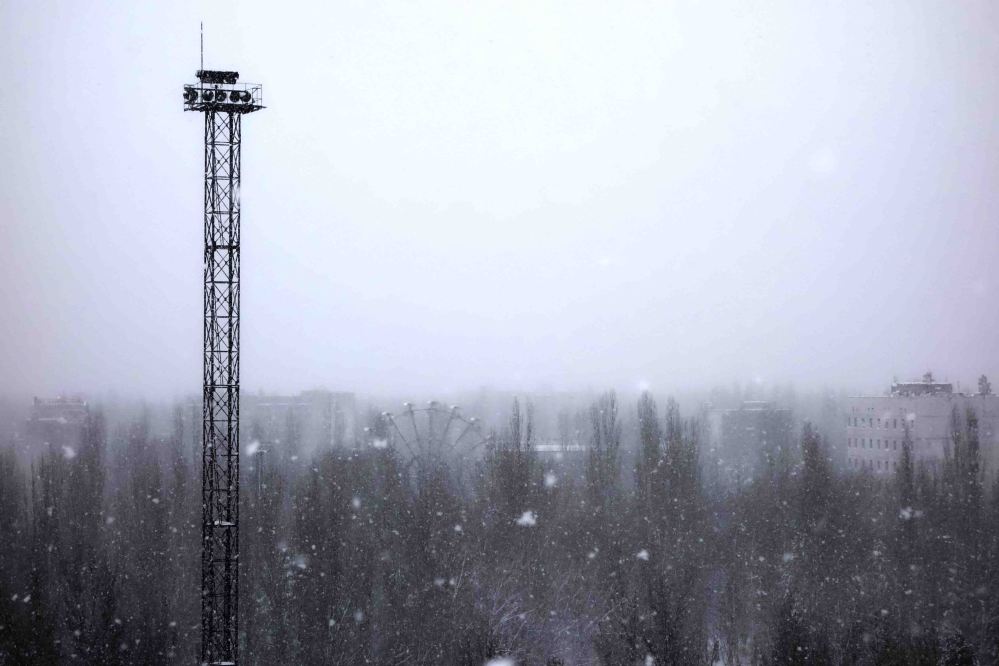