We parked just outside the city and made our way in through the backstreets. Crossing the canal took us away from the main roads and suddenly we were strolling along quaint cobbled streets lined with beautiful old houses. People ambled past us, or stood chatting in doorways – going about their lives. Stumbling across a small market we couldn’t resist and ended up continuing our walk with a kilo of cherries – all perfectly ripe and utterly delicious! The number of people grew as we walked further into the city; the tiny residential roads gave way to larger streets adorned with shops, cafes and restaurants. The tables and chairs sprawled across the pavements and, although it was still fairly early, the air was filled with amiable chatter of patrons. We strolled on. 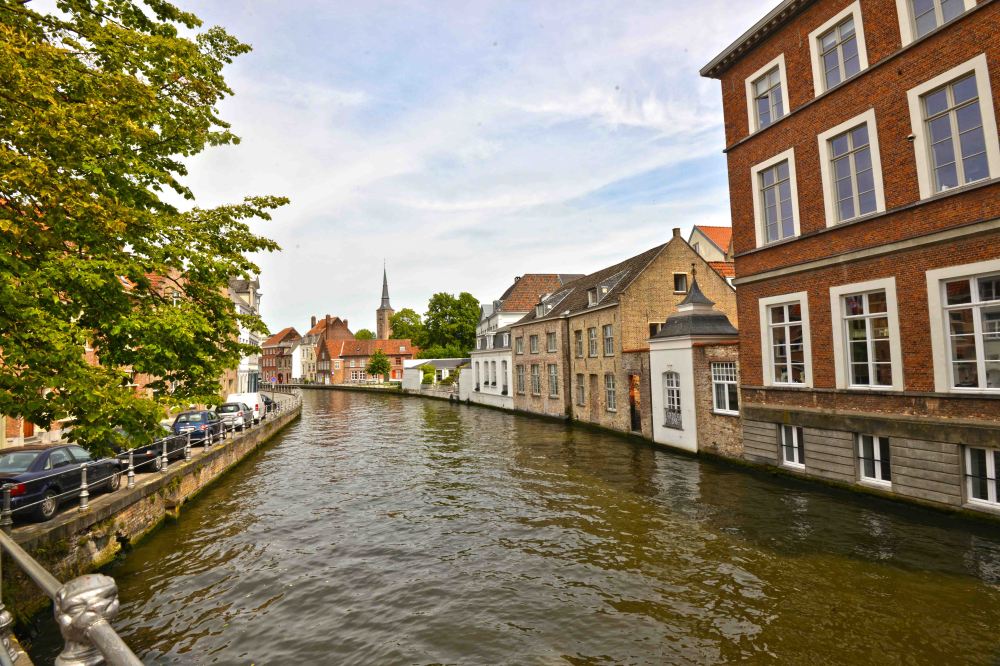 After a short time we turned a corner and with no warning found ourselves in Burg square and the scene we were presented with epitomised the hustle and bustle of a tourist destination. There atmosphere become lively and in our relaxed mood we sat on a bench to watch the world go by… and eat cherries.

Tour groups moved like schools of fish across the cobbles, moving their heads in unison to whatever building was the focus of the current story. Families on bikes whizzed through, stopping to wait for the youngest, and dad, trailing behind. Every few minutes a horse and cart would trot past, watched pleasantly by all those, like us, who were on the side-lines enjoying the theatre of it all. 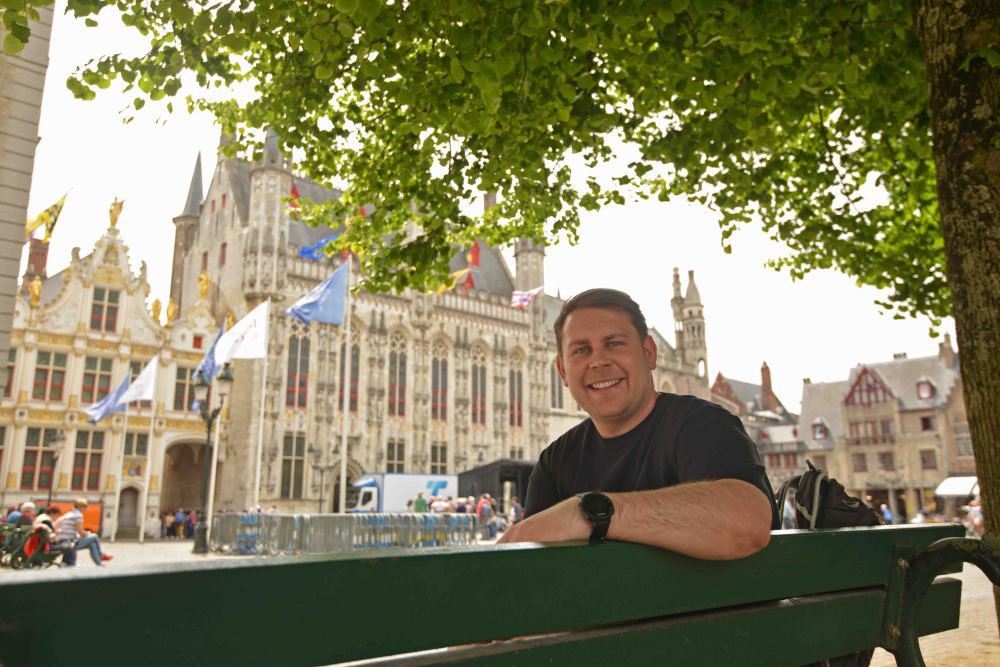 In front of us stood a collection of historic buildings: Brugse Vrije (18th century court building), Stadsbestuur Brugge (city hall from the 1300’s), Basiliek van het Heilig Bload (church and pilgrimage site). The ornate details of their architecture were prominent in the sunshine. This city hall was adorned with flags, the Belgian flag, among others, fluttered in the breeze looking exactly as a flag should. Our bench was on the perimeter of a pedestrian area, a perimeter marked by large leafy trees. As we looked out over the scene before us the hanging boughs framed the image in fluttering green, offering us shade from the warm sun.

Moving on we found ourselves in another prominent square, Markt, the central plaza. Once again people moved in every direction, joined by endless bicycles and the less frequent but still ever present horse and carts (it seemed that as soon as one trotted out of view, another trotted in.) Edged with restaurants and cafes there was a buzz of activity in every direction.

The impressive Provinciaal Hof (court) lines one entire side of the square – a grand building built in the gothic revival style, both inside and out. This first building on this site was demolished in 1787 and replaced with a neo-classicist building. From 1850 it was used to house provincial government meetings, but unfortunately burned down in 1878. The building that stands today was started in 1887 with the last parts of the building being finished in 1920.

Across from the court is the Beffroi de Bruges, a medieval bell tower and one of the city’s most prominent symbols. It once housed a treasury and the municipal archives, as well as serving as an observation post for spotting fires and other danger – now it is a tourist attraction, allowing people to climb the steep and narrow 366 step staircase to enjoy panoramic views across the city.

From the squares small streets break off and zigzag their way through a myriad of smaller buildings, none of them spectacular points of interest but still historic. The small cobbled roads don’t offer much room and so the buildings feel tight around you, causing you to look up to take in the details of their 2nd and 3rd storeys. The warm coloured stonework was emphasised by the sun’s light during our visit and everywhere felt clean and bright, perhaps even a little sparkly!

These is so much more to Bruges than just the main central ‘tourist’ areas, but as the bustling heart of the city it was a good place to start our exploration, and we were happy to linger, enjoying the lively ambiance of this much loved tourist destination.