Today was the day to get the floor screwed down and secured in place! Before we could do this we had to carpet the wheel arches and we used the floor ply as a template for cutting out the lino.

We had intended to carpet the wheel arches on our previous van day, however we managed to leave the cuts of carpet we needed behind and had to rethink our plans for the day. It is safe to say that we checked we had everything before heading to the workshop today! The wheel arches needed to be done before the floor took its permanent position for evermore.

This was our first experience with the carpet – we have opted for the usual 4 way stretch camper/vehicle carpet. We chose ‘smoke’ as our colour, it seemed to be a nice middle ground as anything too light would show up any dirt, however too dark and it can make such a small space look dingy! We used our trusty TrimFix to secure the carpet.

We cut out 2 pieces of carpet to cover the wheel arches, as it was my first time using this stuff I gave myself extra in terms of measurements – trimming off the excess seemed less disastrous than misjudging it and ending up with a bald spot and having to patch it up! The carpet was going straight onto the gold foil, so that would have been one shiny bald spot!

I started at the top middle, as always with TrimFix, applying a layer of glue to the full amount of carpet and a fully covering layer to the foiled wheel arch and waiting for the glue to start bonding before sticking it down. From that middle section I worked on each side, moving out and down the wheel arch, stretching the carpet out to remove any crinkles and bubbles and smoothing it onto the surface beneath. You have to work promptly as the glue holds fast and you don’t want to be stuck with any ugly lumps and bumps because you didn’t stretch it out quickly enough. This happened on my first small section, luckily only a tiny air bubble turned crinkle, which is barely noticeable now, however it was enough to make me up my game for the rest!

Once the wheel arch was done I trimmed off the edge, so there was approximately 1-2inches overlapping onto the van wall and then made sure this section was fully stuck down as well. And then I repeated on the other side.

I was actually really happy with how these turned out, Callum had handed the carpeting baton over to me pretty early on (before we had even bought the carpet!) as he was convinced I would be better – and after a quick go we found out he was right, although it was a lot of pressure to begin with! The carpet is surprisingly stretchy and moulds to the grooves of the van really well, I wouldn’t necessarily say it was easy to work with but I had no issues with it and was pleased with the finished product.

We put a small dollop of out red oxide primer on each of our floor battens (which could easily be seen through the foil insulation) and lay the floor down on top. Upon re-lifting the ply this gave pretty precise markers for where we needed to screw into. However, these markers were on the bottom of the ply so we drilled pilot holes in these spots so we knew exactly where we needed to screw into. 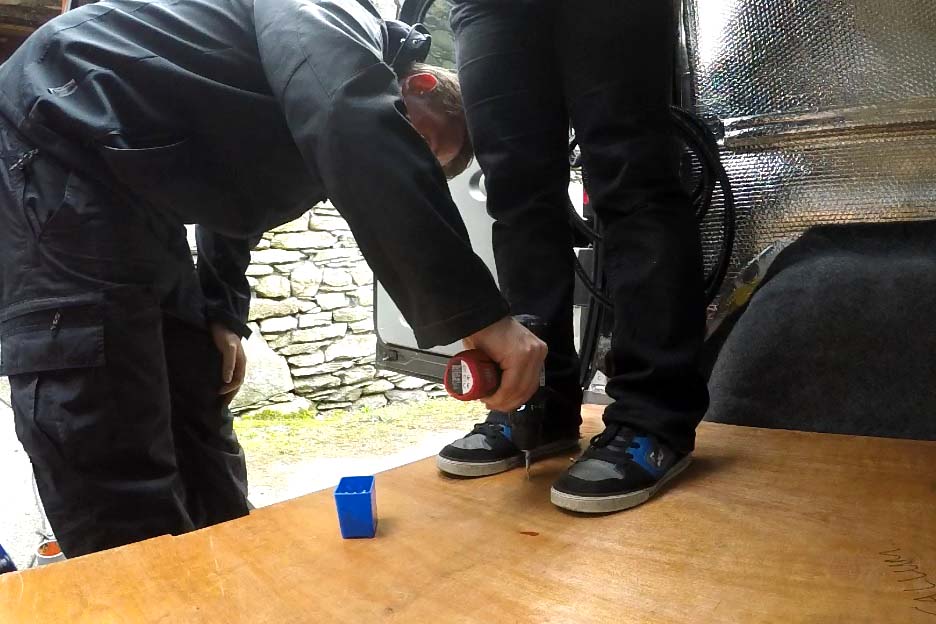 We put the floor back in place and started to put our screws in, very quickly we realised that now the ply was being pulled tight to the van floor, where our three panels met, they would not line up neatly. To overcome this we cut a small square of 6mm ply, places it underneath the floor equally spread between the three and screwed the separate floor pieces into it. This ensured that once all the screws were in place this junction, as it were, would be kept almost perfectly flat by the piece underneath that it was secured to. Not an ideal situation but a quick fix! 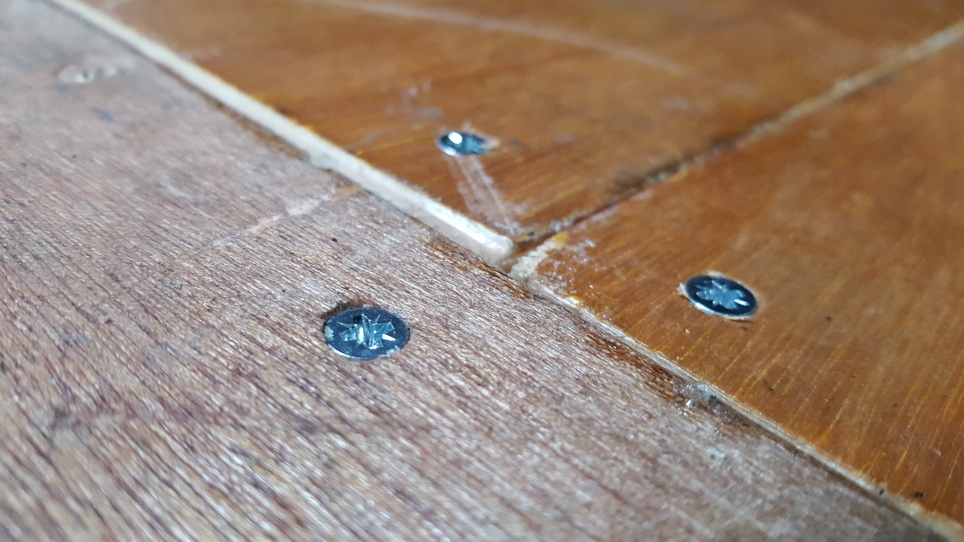 All screws in and our van floor had found its final resting place!

Before we screwed the floor ply down we used the pieces as a template to cut out our lino. We had ordered our chosen colour the week before and luckily it turned up just in time- we collected it on our way through town in the morning. We went for a grey toned, wooden floor effect pattern. It is fairly light (still being conscious about the small space being dark and dingy) but has good tones that will hopefully hide any dirt, as we will inevitably be in and out with our walking boots on. Lino seemed like a decent choice for flooring as it is inexpensive, doesn’t add any significant weight, easy to clean and comes in a huge range of colours/patterns, so we were bound to find something we liked.

We lay the lino upside down on the grass (didn’t want the concrete to leave any marks or dents in it), and then placed the floor, also upside down, on top of the lino. Using a Sharpie (or any other reputable brand you may have…) I drew around the exact shape of the floor. The lino was then cut out, leaving about 1cm extra all the way round – again much easier to trim the excess off later, pretty hard to stick it back on convincingly!

Once the floor was secured we lay the lino in place and trimmed off most of the excess using scissors. To get the prefect edge we used the utility knife and trimmed it off little by little until it squashed into the edge, perfectly flush, and lay completely flat. Callum had far more patience than me for this bit so he cracked on while I sat next to him chattering away… team work!

Another day of huge progress!