The parents were in town and we were going for a walk! I always try to pick something they haven’t done before to give them a different taste of the Lakes each time they come, unfortunately Callum had to work on this particular day so I decided to keep it in the valley – Place Fell was the choice.

You can hit this peak from a few places; we decided to get the boat to Howtown and walk back to Glenridding climbing up over Place Fell. The peak itself is at 657m, with a gradual walk up to the cairn through varied terrain. Coming down the other side is steeper, but well-made paths make it super easy to navigate, the views you get from the entire walk are great, especially with the weather we were treated to.

The day was bright and sunny, blue skies and rolling clouds, there was a strong wind which made it feel much cooler considering how strong the sun was. We hopped on the Ullswater Steamers for the half an hour (ish) boat ride to Howtown, a few people got off at our stop but they all seemed to disperse early on. We did the usually start (the same walk at this stage as Glenridding to Howtown, http://bit.ly/Howtown), following the lakes, making our way through Hallin Hag woods, stopping to enjoy the gnarled trees and spattered woodland wildflowers. Through the fields, the farm and past Sandwick we were making good time, chatting away and enjoying the scenery and sunshine. 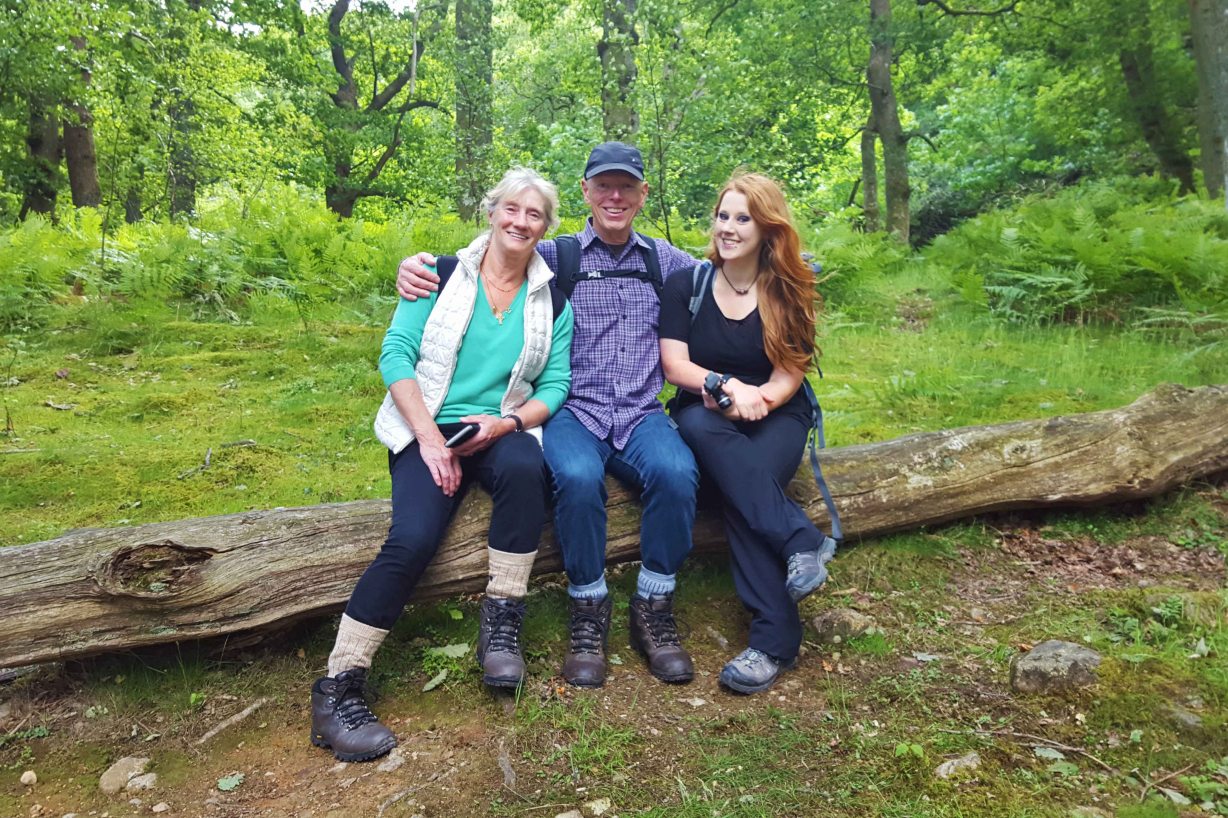 Just after the farm was where our path would take a different turn, this is where you break away from the lake a little and start heading up. It is a gradual climb up a grassy slope – at least it was the last time I did it, the crazy weather we have had recently (downpours and insane sunshine) has meant things are growing incredibly fast, the bracken included. Our path was hidden amongst the dense green bracken. Picking a sheep track in the general direction we headed up. There is a particular bench on the hillside indicating the right path for this was, which we couldn’t see at all until we had stumbled across it – at least we were going in the right direction!

The bracken continued for a long while, trying to navigate was difficult – spying tracks through it, we would head in that direction only to find that the track was actually a boggy stream, causing us to pick another and make another gamble. Luckily the prolonged dry spell meant that those bogs were much drier than could and normally would have been. My dad picked the next track which turned out to be the correct one, the smarty pants was pretty pleased with himself – and rightly so, as it allowed us to cover some good ground before stopping for lunch. We picked a craggy spot, tucked out of the wind with a lovely view overlooking the lake. Looking down on the blue water, surrounded by the green flora was great, the big quite clouds made their way across the sky and the long grasses and flowers danced in the wind we were sheltered from. 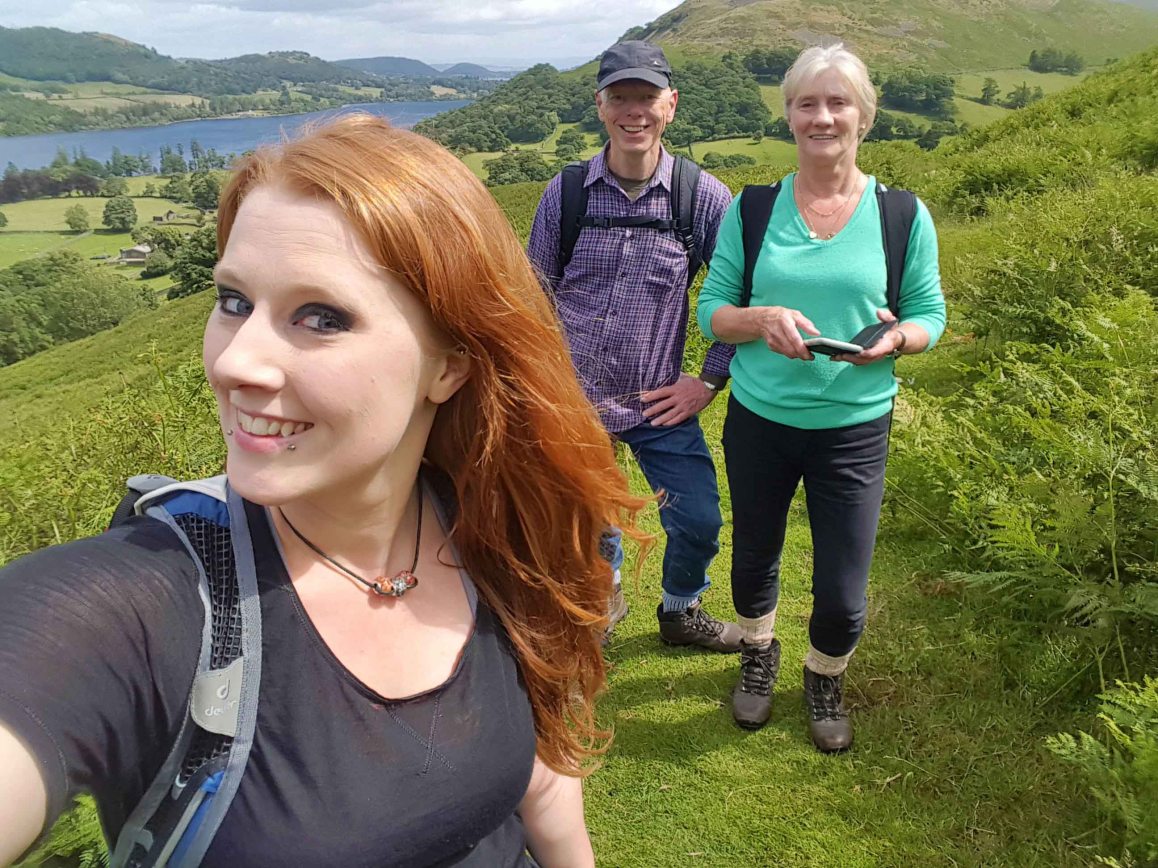 Continuing on, the path still climbing we ambled and chatted – After not seeing each other for a good few months there was plenty to catch up on. You don’t realise how many big things happen in the time apart until you start taking about it; Callum and I had lost our beloved Quinn, we started converting our van, I got a promotion at work, my parents have had their garden completely redone and my dad is talking about retirement, as well as all the day to day growing up of my nephews. That’s a lot of catching up to do, and catching up we did! 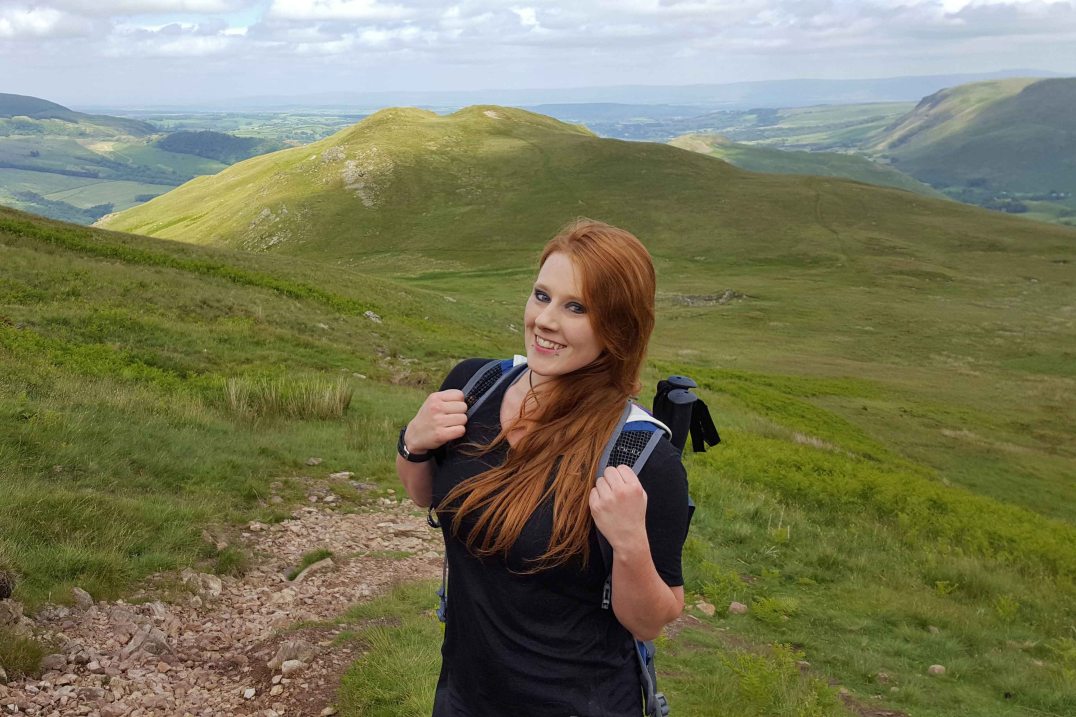 The bracken started to thin and the paths became rocky tracks opposed to grassy slopes, gaining height all the time the views were becoming more impressive with every step. As well as up, we were also heading slightly further into the hills and away from the lake, not by much but it did give us some great views over the surrounding peaks with the shadows of the clouds moving across them swiftly. After a mile or so and lots of stops to take in the view the path bears a significant right turn, away from the lake as it heads around the back of the fell itself to do the final climb. This section is more open, those long moor-like stretches with the rocky path meandering through, passing a tumble down shepherd’s hut before starting the last stretch of ascent. 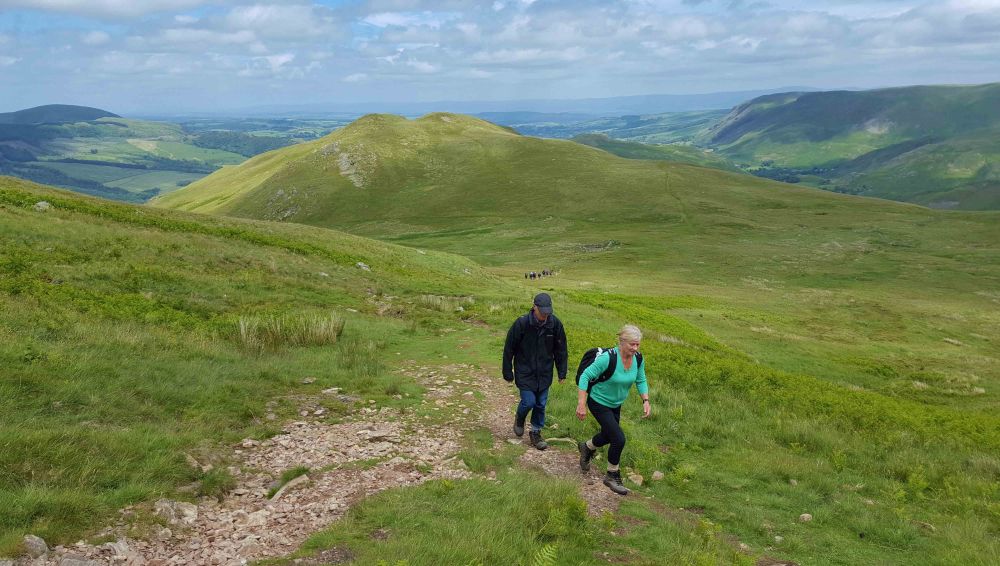 Crossing a very dry stream, we came across another tumble down hut, this one just a foot or two of wall remaining in the rough shape and from here we could see our path rising steeply behind. Onwards and upwards, in my usual fashion I would power through a section only to stop and catch my breath looking at the view, my parents headed up more steadily, but we were more evenly matched than Callum and I usually are! After this stretch the path seems to twist and turn a bit towards to the top, finding the easiest route I suppose. There are grassy stretches and crags to clamber over, and all of a sudden you get to the edge overlooking Glenridding – and what a view! You suddenly appreciate heading up the back when you see how steep the front is, falling down into the lake. The greenery of the scene varied greatly from the luminous fields on the valley floor, to the darker greens of the fell tops, the trees were darker still and the shadows on the peaks added to the dramatic view. It was a beautiful day to be up high! 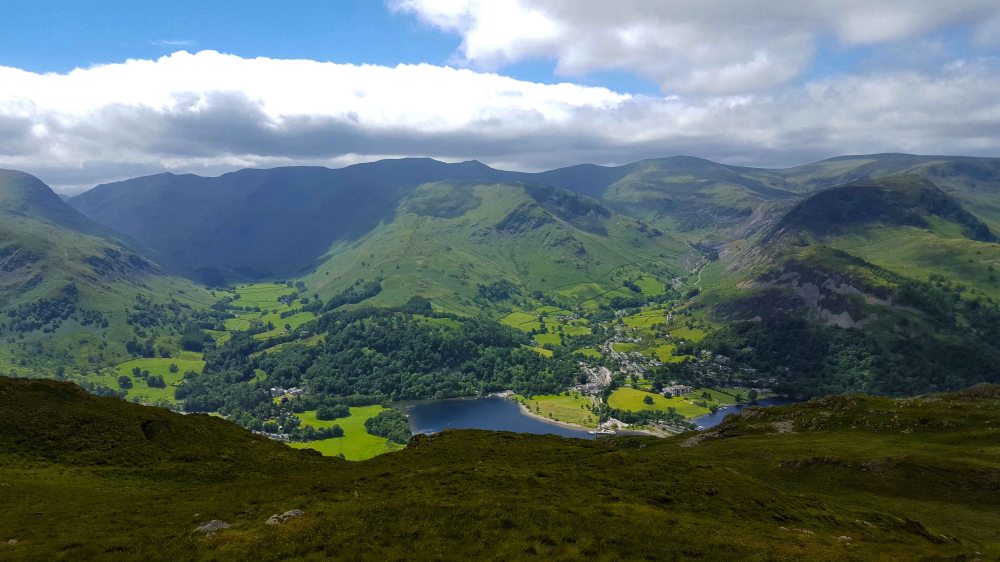 Just a short distance more and we were approaching the cairn; to get to it you have to make your way over the rocky surface of the very top of the fell. It is an odd surface which only seems to be present at this point, the rocks stick upwards in ledges, making it easy to twist and ankle or lose your balance, especially in the wind we were facing, but luckily neither of those things happened. We took a few photos at the top but it was so blustery we didn’t have around too long – long enough to take in the far reaching views of the valley, which were fantastic!

I let Callum know we were at the top and whilst on the phone, he got some binoculars out at work to have a look for me. I was a tiny dot at the top but he could see me waving – I could see the point where he was watching me from and I couldn’t even make out people it was so far down. A silly exercise but I enjoyed it nonetheless. 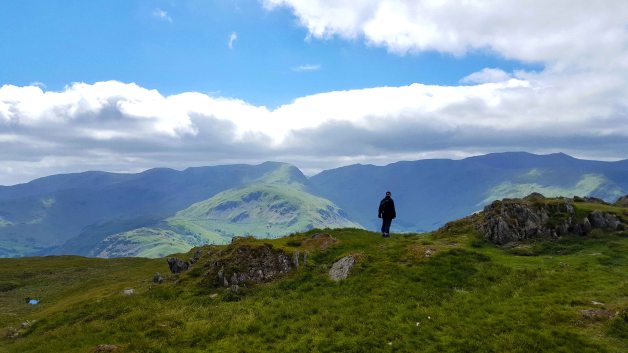 We then made our way back down, the descent is much steeper, but on well-constructed footpaths, which make it much easier. The path leads down the left side of the fell, so the lake is out of view until you turn the corner and start heading back to it. The sun was still shining brightly as we headed down and in our sheltered position we decided to enjoy the weather – laying down on the grass next to the path, 40 minutes passed with the usual chit chat and the admiration of some interesting bugs that flew in to join us. 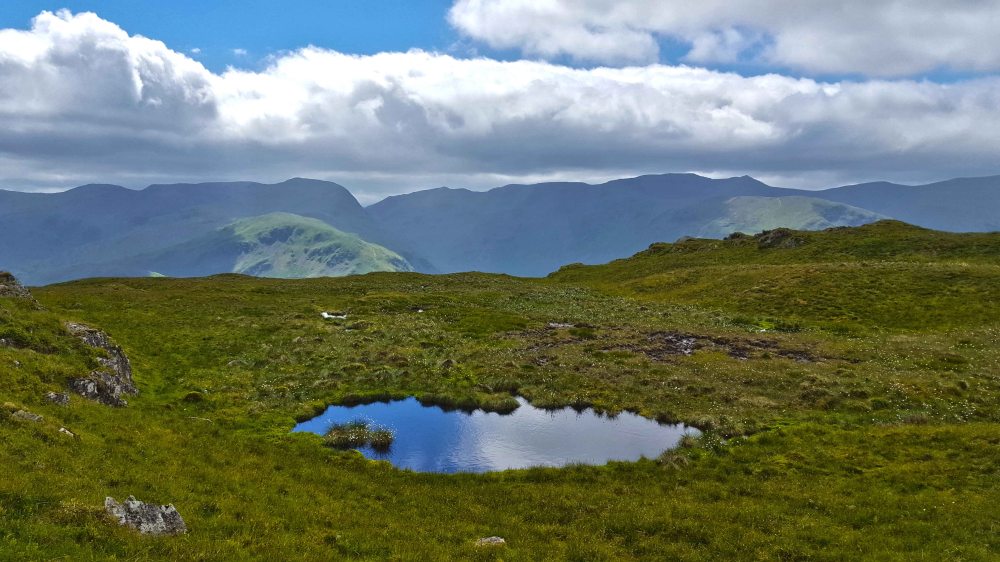 The whole way down we had fantastic views over to the Hartsop Valley and to Brothers Water, again the colours of the day made everything look wonderful, such vibrant blues and greens! Turning the corner and heading back to Ullswater, the path becomes a single file track and is back to being the rocky/gravelly path of the climb. We had to navigate around the giant bags of stone that had been heli-lifted in for footpath maintenance but it was an easy descent with even more fantastic views. I had taken so many photos by this point my GoPro was dead and my phone was on its last 3% – I carried on snapping anyway. 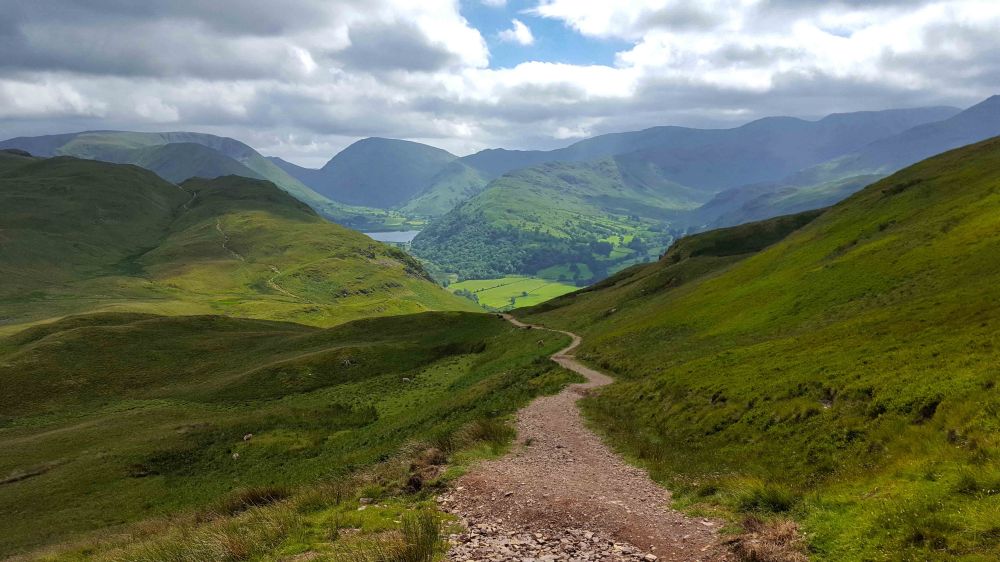 Dropping down into the valley bottom we passed through Side Farm and made our way across the river towards Patterdale. I always enjoy this stretch as it makes you feel remarkably tiny with all the fells rising up around you. After the mile or so between Patterdale and Glenridding, we were back and ready to head to the pub for dinner – waiting for Callum to finish work of course. 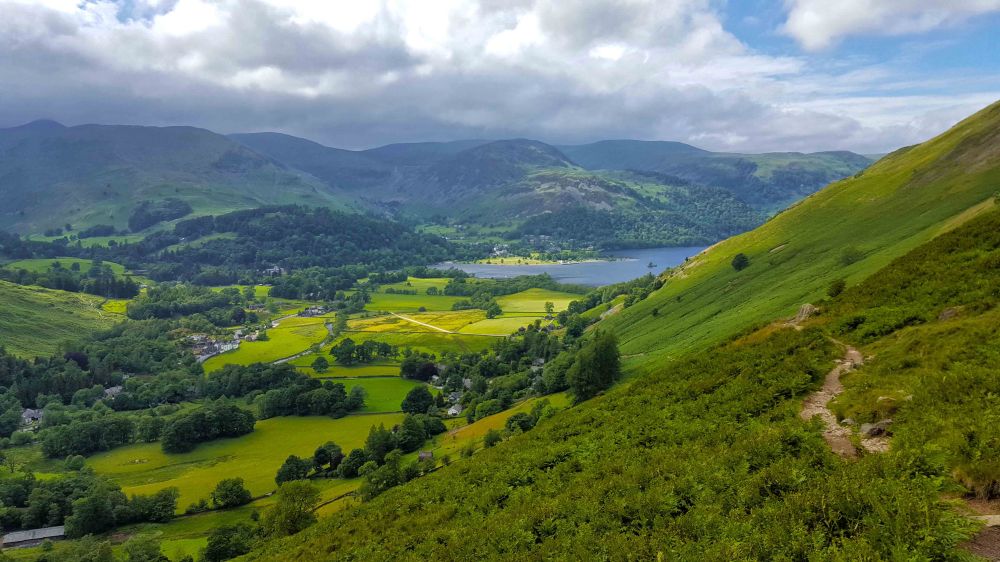