We drove across from Cumbria, setting the world to rights as we did. Not seeing my parents so often means that we have plenty to talk about when we get together, we are all fairly chatty as well so there is rarely a quiet moment. The journey across is an easy one, one long A road across country and then head north for a short distance to reach our destination.

We drove straight to Seahouses, the weather was meant to be changeable for the couple of days we were there, so whilst it was dry and bright we decided to make hay, and by hay I mean go on a boat and see some birds! Having only a couple of days in the area we opted for a tour that lasted a couple of hours, I believe there are much longer ones available. A couple of hours on the boat with a guide including an hour on Inner Farne island (NT owned) to get our close up experience with the seabirds.

We had some time before our boat left, so we grabbed some lunch and went hat shopping – it is heavily advised to have a hat when going on the island as the arctic terns are protective and nimble flyers. Originally I shrugged it off as ‘how bad could it be’ however I later realised that buying a hat anyway was indeed the right decision. Generally speaking I am not hat wearer, for no other reason than that I look fairly terrible in them! I tried on a few different ones, and in the end decided to go all out summery with a wide rimmed straw hat, Callum (who, like me, doesn’t often wear hats) went for countryside chic. With our head protection bought and ready, we went to find our boat. 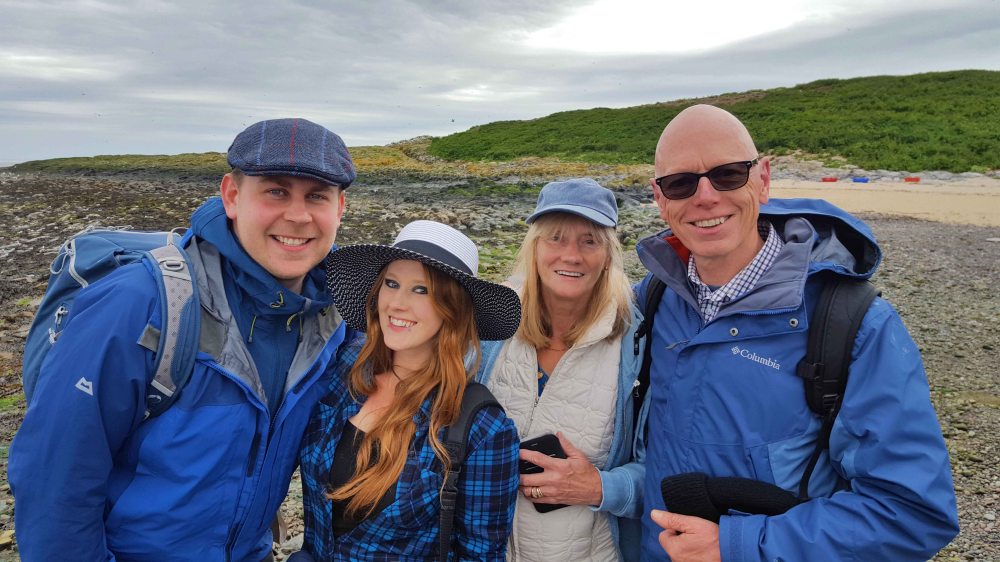 It was a small boat but probably only at about half capacity with the amount of people that got on, so plenty of space to ensure we got a good view! The tour took us out and the first stop was a small lump of rock inhabited by grey seals. Approaching, there was nothing that noticeable about the island, until you realised that there was very little rock on display due to all the seals. I love how nonchalant they are, casually looking round at you before sighing a little and going back to their business. A couple we a little more active, flapping a fin or yawning in the face of their peers. The bulls (males) were dark grey, the cows (females) we much lighter with more obvious markings and the pups (we didn’t see any sadly as it was the wrong time of year) are almost white. They took the boat right up close to the island, so you could see them in detail, their shiny eyes and large nostrils make them look very cute, although I also saw their teeth and am under no illusion to how ferocious these mammals can be. It was soon time to move on but there is no denying it was a great start to the trip!

Next we headed to a slightly larger island, this one rose much further out of the water and the cliff face was almost in columns; sheer drops with a flat top and various ledges all the way down. As we got closer the commotion was fantastic, I knew we were due to see lots of birds, but I was not quite expecting how many there actually were. Every edge, ledge and pinnacle had a bird on it, they were squawking, swooping, barging and splashing around each other with a calamitous noise. They took the boat right into the coves and the birds loomed over us, a little interested but obviously preoccupied. It was a fantastic sight and yet we were told this wasn’t even at full capacity, they gave us some surprising figures regarding how many birds will nest on the islands each year. It was hard to know where to look as they pointed out the different species: guillemots, bridled guillemots, shags, herring gulls, puffins and more I struggle to remember.

The main bird we noticed at this point was the guillemots, they are large brown birds with a white underside, their black eyes and beaks are underwhelming. They are plain birds, but the way they fly and dive makes them incredibly interesting. They were socially noisy, chattering away to each other as they dived off the rocks into the water. We also managed to see some bridled guillemots, these are the same species but have the white marking around their eye, and they are less common so I was pleased to be able to see some. They are cousins to the puffins (seems unlikely looking at them) and the razorbills (much more believable!)

Moving on to the next spot we passed the lighthouse where we were told about William and Grace Darling, a father (the lighthouse keeper) and his daughter who risked their lives during a storm to save survivors of a shipwreck. Grace had spotted the sailors clinging desperately to the rocks nearby, they took the lighthouse boat out in the raging weather to try and rescue them. They cared for the 9 rescued in the lighthouse until the storm subsided; Grace was only 22 at the time and sadly died 4 years later.

We passed a few more of the islands, also covered in bird-life, and all the while we were surrounded by all the different species flying across the water, diving in to fish and gliding over the boat. I was torn between trying to snap away or just sit and watch in awe – I did a little of both! We were told about a few more of the islands and the buildings on them, mostly for the National Trust rangers to live in whilst they spend 9 months of their working year surveying the birds. Before too long we were arriving at Inner Farne, the National Trust owned Island you can get off and walk around. This island is home to all the same seabirds; however they NT have built boardwalks around the island to allow visitors to get a closer look. Upon mooring we were told again about the need for hats as well as the need to be careful of eggs and chicks on the footpaths, they were correct on both accounts! We clambered across another boat to get to the shore and instantly it became a very immersive experience.

The first experience was with the arctic terns, ground nesters with a vehement protective streak over their young; they would open their bright red beaks and squawk loudly in your direction as you passed, if a little too close for their liking they would swoop up in the air just to dive towards you, pecking you forcefully on the head and repeating until you moved on. Their chicks are tiny fluff balls, brown with black speckles, a white front and a bright orange beak; they seemed nonplussed by the onlookers, waddling around waiting for a parent to bring them back some food. They were very sweet little things, ducking in and out of the shrubbery on the floor, or cosy-ing up to the adult when sat on the nests. The arctic terns themselves were sleek, black on top of their head and white on the rest, they had long pointed wings and a forked tail, they were agile, quick and noisy, bringing a lot of chaos to the experience, and I thoroughly enjoyed that chaos!

As you move around the island, you then come across the puffins – these are probably the reason why most people go and I was excited about seeing them too, who can resist those comical little birds with such beautiful faces. They are just less than a foot tall, black back and wings, white undersides and during the right season their beaks are vibrant: orange at the end and blue at the base, they have a striped appearance with yellow on the face. Their sad eyes juxtaposed against those bright colours add to the cuteness. They nest underground, but seem to spend a lot of time padding around above ground also. Occasionally one would fly in with a mouth full of food, landing a metre or two away from its hole and would immediately get attacked by the terns looking to pilfer, the puffins would then scuttle across the ground as fast as they could diving into their holes head first and just in time. They were wonderful to watch, full of character and we all felt lucky to be able to see them so up close. Apparently puffins only come to land to nest and could therefore be considered as the only true seabird, regardless of this they are fascinating and great fun to photograph.

Towards the back of the island there was a cliff edge, much like the ones we had sailed past earlier. This is where we could get a better look at the razorbills and the shags. The razorbills are sleek birds, they are black on the back and white underneath. They have black heads, their shiny eyes almost disappearing against their smooth dark feathers, and a black beak with a single white line running down it. Official and colourless, that is until they open their beaks and the vibrant yellow inside is displayed for the world to see. These were the least active of the birds, I didn’t notice any young so they were perched on their ledges, incubating (I assume).

The shags were great, and I have a much greater appreciation for them now after getting to see them up close. Their black feathers have an emerald tinge; they have a flash of yellow by their powerful black beaks and a green eye, almost dragon-like in the way it watches its surroundings. They are big birds and have a mean look about them but their babies – their babies are something else entirely. Shag chicks are hideous, scaly looking things with wrinkly necks and tufts of down growing through on their heads. They are ridiculously gawky… and I loved them! The older ones are covered in the brown/black down and sit, plump and gormless, waiting for the parent to feed or groom them, it’s almost hard to believe that they turn into such sleek sinister looking birds as they grow up.

Time flew by quickly and in no time at all we had to head back to the boat to return to the mainland. It was a fantastic experience to see and learn so much about birds that I previously didn’t know much about. Normally I question those experiences that push humans into the lives and habitats of animals, I am dubious about the damage our presence may do to these precious ecosystems however it was obvious that the birds ruled the roost (excuse the pun) on the Farne Islands. Our presence is permitted so that the National Trust can continue to protect the land and look after these birds whilst offering a great chance for people like me to experience and learn something new. Both Callum and I and my parents said we would definitely go back in the future and I have discovered a whole new love of seabirds!