We awoke the next day to a pretty grey and blustery day, which always makes it feel even cosier, tucked up in the van! Our plan for the day was to climb Merrick, changeable weather (including some snow) had been forecast but we thought we would give it a go anyway and turn back if it did get too bad, luckily that didn’t happen and it stayed okay most of the day! Merrick is the highest mountain in the Southern Uplands at 843m, a linear path to the peak leads from Glen Trool and up over Benyellary.

The first section of the path is narrow and rocky; uneven and littered with large boulders it snakes through the hillside at a decent gradient. The recent rainfall had turned it into a fast flowing stream; trying to keep our boots as dry as possible we hopped over any of the larger pools which we gathering. The surrounding ground was covered in dead bracken; flattened and trampled it cloaked the hillside in a deep orangey/brown offering vibrancy to an otherwise grey day. The river was is full flow thundering along its course, foaming white as the higher cascades streaked into the small pools below. It created a fantastic noise, the constant roar was embellished with bubbling and splashing depending on which sections we were walking past. 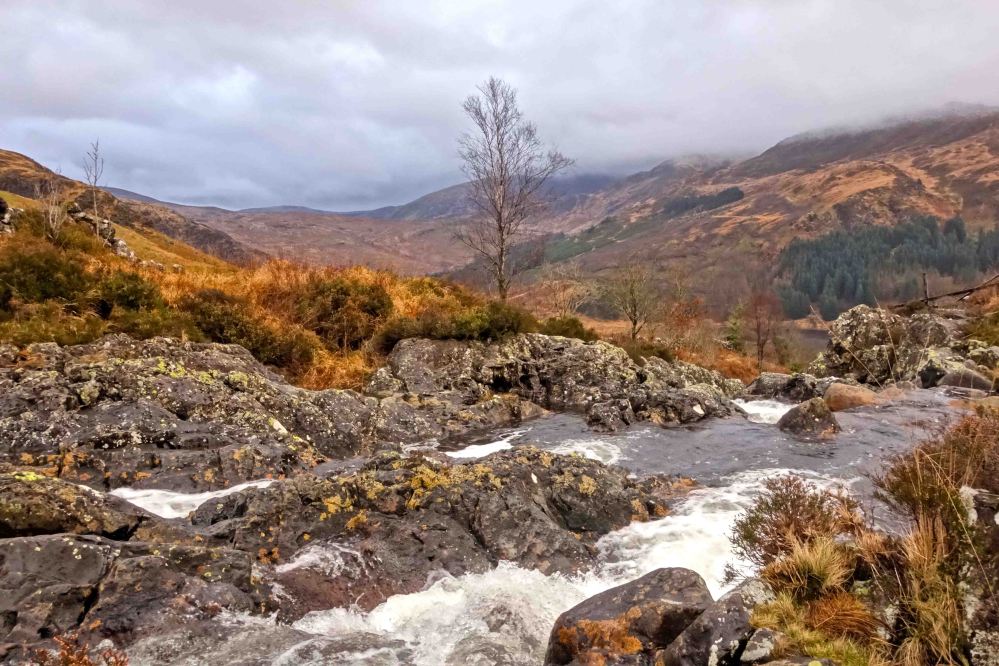 The path approached and retreated from the water’s edge until we broke away from it altogether and started climbing higher. All along the route spindly weather beaten trees reached dejectedly towards the sky, minimal signs of life showing on their bare branches. As we climbed higher we noticed the addition of small, lush green spruces dotted along the path, the further we walked the more abundant they became, growing in swathes across the hillside lending a splash of colour to the wintery landscape that surrounded us.

We followed the winding path (which still heavily resembled a stream) until we came out into a clearing and approached a small bothy. Skirting around, we continued en route eventually reaching a large forestry track. Almost as quickly as we came onto the track we were breaking off it again, heading through a deer fence and into the towering trees which lay ahead. The path in the trees was steep, rocky and ill-maintained – strewn with large rocks and deep cut-outs in the ground it felt like rough climbing.

It was the usual forest scene; tall straight trunks protruded from the mossy undulating forest floor which was dotted with mushrooms. The diffused, almost smoky, light illuminated everything softly as it broke the dark interior of the trees. Our path took us through a couple of clearings, the outside world seeming so much brighter in comparison to the darkness of the trees, and eventually we emerged the other side. A sign on the ground depicted that we were leaving the ‘Forest Zone’ and entering the ‘Montane Zone’.

The rest of the ascent was across vast grassy moorland, the height gain had greatly improved our vantage point as we looked down over the glen, Loch Trool completely hidden deep down at the bottom of the valley, the entire scene full of deep earthy colours. Our gravel track meandered a little as we continued to climb and a few small streams trickled down the hillside in small gullies. Through another deer fence and a short way ahead we could see the clouds swirling around the top of Benyellary, not too far from us. Now much more exposed, the wind whipped past us dropping the real-feel temperature significantly, our jackets were back on sharpish!

Breaking through the cloud line we could see the swirling grey collecting before being blown through by a gust of wind. Leaving the gravel track behind we made our way up the grassy slope, the grey wisps continuously dancing around us. Looking back over the flatness of the wider area we had far reaching views one minute, the light managing to break through illuminating the farmland below, and the next we were surrounded by cloud once again. The higher we climbed the stronger the wind blew, reaching the top of Benyellary we moved on pretty swiftly. 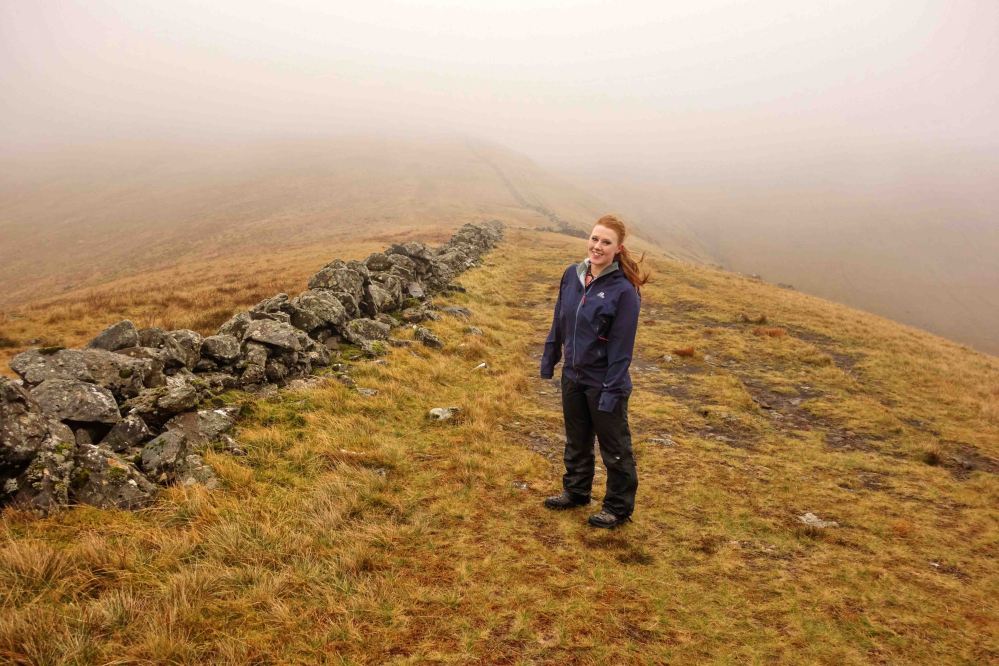 The ridge line stretched out before us, the ground sloping steeply away and the void was filled with thick grey mist – we had no idea what lay beneath! Following the tumble-down dry stone wall, we had no idea how much further the final ascent up Merrick would take us. A steady incline took us past several cairns, all appearing out of the gloom as though they were the last and highest, only for the path to carry on past to the next one. Finally we saw the white-washed trig point and we knew we were at the top. The wind was insanely strong, struggling to stay on our feet in the gusts and the precipitation stinging our faces it is safe to say we didn’t hang around long!

Feeling the chill we decided to up the pace for a while, jogging back down the hill the wind cleared some of the cloud cover and we were treated to some fantastic views. Small bodies of water nestled amongst the lumpy hillside, the ripples (whipped up by the wind) raced across the steely surfaces. We could see for miles over the flatter land beneath us and although the clouds still hung low in the sky, the sun was breaking through creating incredible rays. This transient light illuminated the small pools on the hills ahead of us turning them into molten silver.

Back over Benyellary and retracing our steps down the hill we were once again approaching the trees. In amongst the endless trees I was once again consumed with how beautiful forests are (it turns out I really like this kind of environment!) and in no time at all we were out the other side descending down to the bothy and once again tramping along our gravel, water-filled path. The rain started to come down which quickened our pace pretty significantly as we made our way back down the side of the river. We now just splashed though all the puddles instead of trying to avoid them, as the rain fell down on us heavily. Hopping from rock to boulder we ate up the miles enjoying the view over Glen Trool ahead of us.

Getting back to the van the rain had eased off and we were able to shake off our waterproofs and get changed into dry clothes! Moving on we headed over the small roads through the Galloway Forest Park, enjoying the twists and turns of the single track road through the countless trees. A heavy rain shower poured down on us only to blow through and be replaced by amazing dramatic skies above us – blue and orange galore! 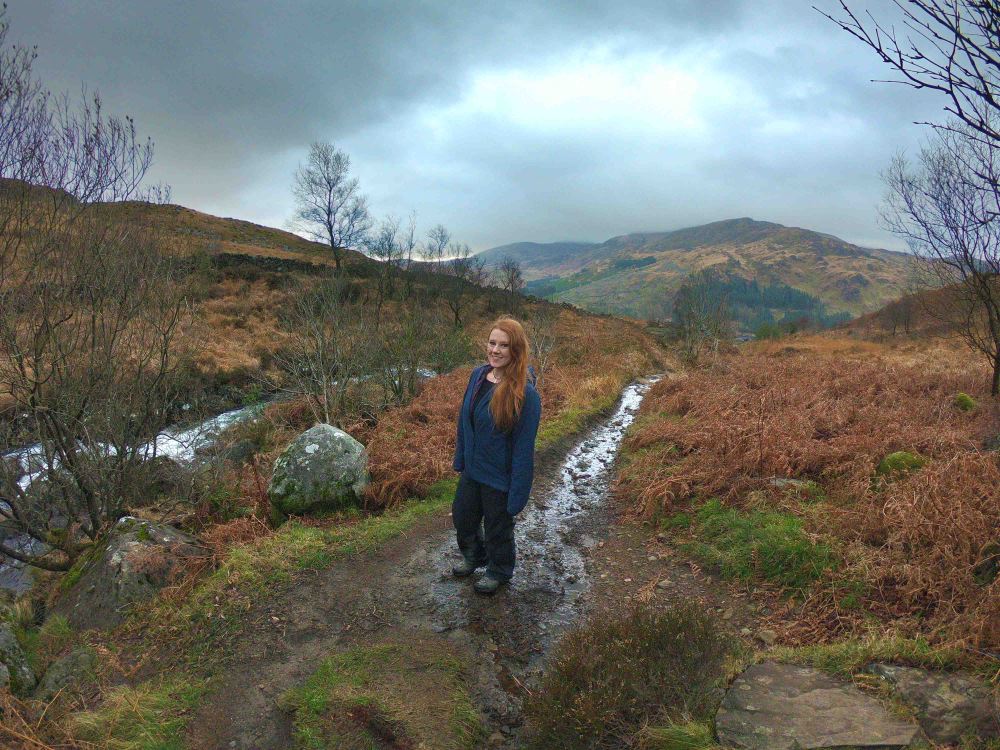