After breakfast we drove towards Ayr and the coast, it was drizzling most of the journey but dried up just as we got out the van. We headed straight down onto Greenan beach, the tide was out and the water had the same pallid grey countenance as the sky which sat featureless above it. The sand was dull in colour, but the ripples created by the tide held shallow pools of seawater appearing as silver streaks across the sand. Dark clumps of seaweed littered the beach; still wet from the previous high tide they appeared suitably slimy. The whole scene was silver and quite pretty in its generally nothingness.

As we strolled along the wet sand would give way under our feet, splashing through the pools and streams which were all making their way down the beach back to the sea. It was a quiet morning and there was barely a soul around. We could see the castle inching ever closer as we made our way along the shoreline. Stood on the edge of a small cliff, the stone tower that is Greenan Castle looked dark against the silvery sky. Greenan Castle is a 16th century tower house which is believed to have been built on an ancient fort. There is an inscription above the entrance ‘JK 1603 FMD’ for John Kenneday of Baltersan and his third wife, Florence MacDowell, who held the lands at the time.

Continuing along the beach we chatted away whilst looking for signs of life in the pool – every so often one would look particularly promising but all we found (thanks to Callum’s eagle-eyes) was a teeny tiny shrimp! Down by the water’s edge the water lapped gently against a long stretch of slanted flat rock, we walked the length of it enjoyed the subdued movement of the calm water and the gentle sway of the tide. A lot of the rocks were covered in the same dark seaweed which glistened with its salt-water coating, and were mighty slippery! Every few steps you would step on a clump only to realise it had been hiding a pool beneath and the boot would sink straight in with a splash.

With every minute we were on that beach the sky was brightening and the day was improving, albeit slowly. Reaching the end of this particular stretch of sand we turned back on ourselves and made our way back towards the castle. Large shallow pools created perfect reflections of the brightening sky, oyster catchers and other small waders dipped their way through the water looking for something delicious no doubt. The sand rippled right up to the base of the rock on which the castle is perched rather perilously, as the day improved the sand took on more colour and became a dull golden beige. 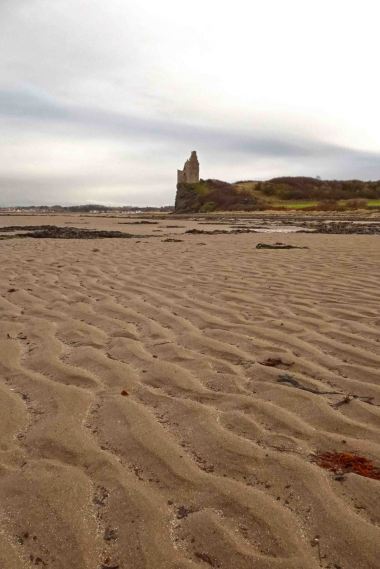 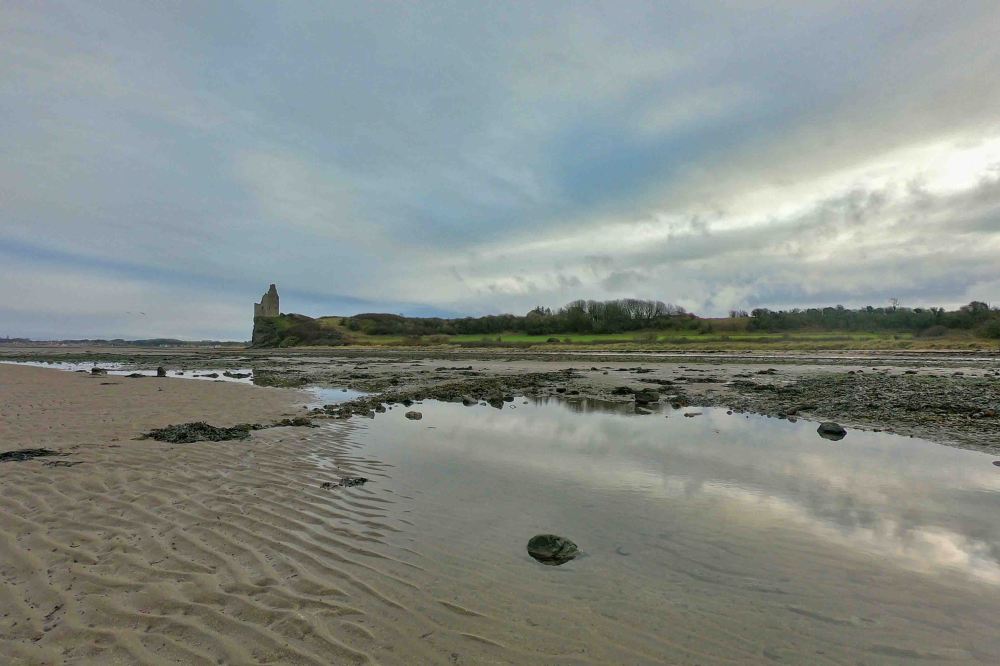 Reaching the foot of the small cliff we followed the small footpath through the shrubbery and started to climb up to the castle. Making our way through the hawthorn/blackthorn bushes we emerged at the top with the castle stood proudly ahead of us, the beach stretched out beneath it. Whilst we enjoyed the view a friendly robin came to make our acquaintance – sadly we had nothing to give him and he eventually flitted off. After taking some pictures we made our way back down to the sand where we decided to walk along the dunes to get back to the van, the long silvery grass swaying amiably in the breeze.

Enjoying some lunch sat in the side loading door we watched the world go by before driving a few miles down the road to Castle #2 of the day. By the time we arrived in Dunure the clouds were breaking up rather promisingly and some blue sky was beginning to show itself. Ambling down onto the beach the gentle waves lapped against the pebbly shore. The castle stood on the rock, silhouetted against the bright skyline, the sun was just starting make an appearance.

Along the beach and under a small natural stone archway, we made our way to the foot of the rocks the castle sat atop. Crossing a small stream cutting grooves into the pebbly surface, we turned away from the sea and started up the grassy slope towards the castle. A small waterfall tumbled over the edge of the grassy bank, dropping several feet into a small pool before feeding the stream on the beach.

At the top of the slope, now level with the castle, we passed the pigeon coop and made our way to the tumbledown fortress. The remains of Dunrure Castle date from 15th & 16th centuries, however the site dates from 13th century, with the earliest charter for the lands dating from 1256. The castle is the point of origin of the Kennedys of Carrick, who once ruled over much of south western Scotland and were granted the lands in 1357. In August 1563 Mary Queen of Scots visited the castle of three days during her third progress of the west of the country. 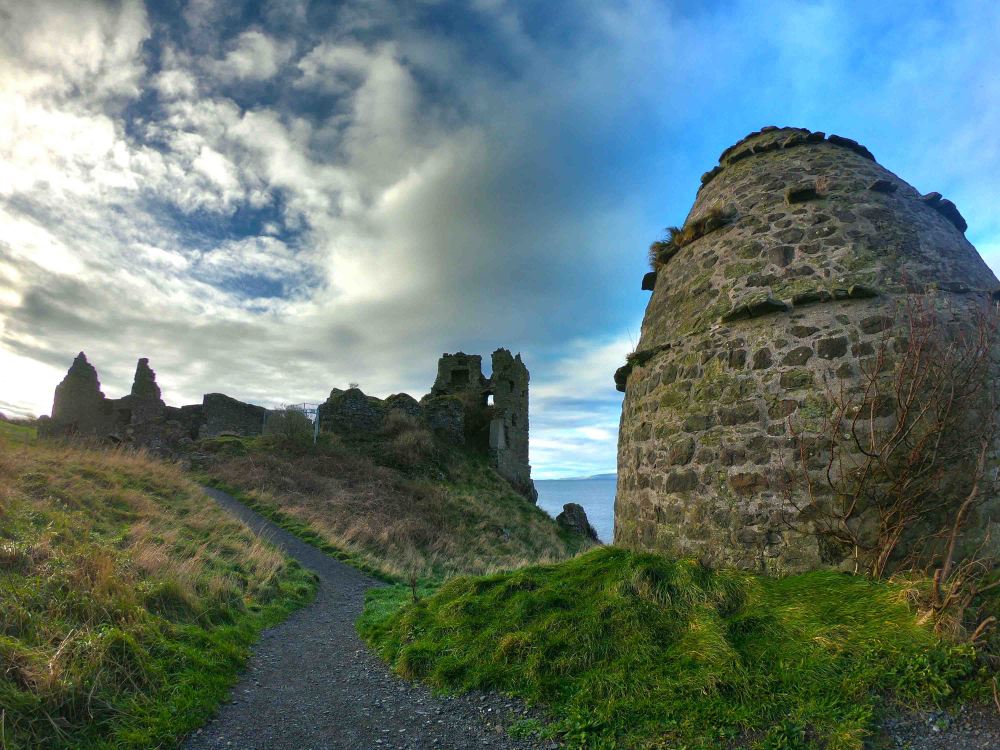 Parts of the castle are fenced off however structures have been put in place to allow access to some of the structure, offering a beautiful view of the Carrick Coast from the highest accessible point. The sea below now looked blue opposed to the metallic grey of earlier in the day, with the warm sun shining through the dramatic clouds which filled the sky. Continuing past the castle, the land curves around so you remain level with the ruins with a small bay in between. The sun now dominating the sky shone brightly on the stonework making it glow against the blue sky behind.

I found a small patch of grass hidden by some thorny bushes with a sheer cliff down to the pebble beach below. Perched on the edge, with my legs dangling over, I sat on the edge and enjoyed the warmth of the winter sun which sat low in the afternoon sky, bathing the world in gold. The white clouds tumbled across the sky, their edged tinted yellow by the sun’s gleam. The cliff edge carved in and out along the coastline with the constant lapping of the water over its rocky base. Ahead there was nothing but an expanse of blue, small white crests showed the movement of the incoming waves, gulls dipping and swaying with the movement. The clouds shifted across the sky and a patch of rainbow appeared, its colours glowing subtly behind the illuminated castle.

As the evening wore on the air grew cool and we decided to make our way back, the birds were cooing loudly as we walked past the coop. Back down on the beach the castle stood dark and proud against the changing colours of the evening sky – bright blues warped into deep purples behind its stoical countenance. Sitting on the beach I noticed that the small pebbles were half made up of small colourful shells some with the crustaceans still living inside waiting for the tide to come back in. The shore took on a blue/grey colour which emphasised the amazing bluey/teal colour of the water at that particular moment.

Feeling a little chilly we decided to head into the local pub, which is a cosy we place with a crackling fire and had a couple of hot chocolates to warm up! It was getting dark when we left and definitely time to move on, so we wandered back to the van to make a move.