It was a beautiful day and we decided to drive to the quiet little village of Dailly, situated north west of the forest park – it isn’t the prettiest of villages but it has a couple of points of interest and is surrounded in beautiful countryside. Parking up on the main street we left the van and wandered through the houses towards the woodlands behind them.

The weak winter sun beamed down on us as we wandered along the muddy path along the river bank. The river, called the Water of Girvan, is a fast flowing body of water which runs straight through the village. On this particular day it was shining blue, reflecting the colour of the sky and contrasting nicely with the grassy banks. A heron skulked around in the shallows looking for some breakfast, a fair distance away, seemingly nonplussed by our presence. Crossing the footbridge we entered the woodland, the wide dirt track heading into the trees and a little further away from the water.

In no time at all we were approaching the first of the Dalquharran castles, the old castle is a typical Scottish ruin nestled in the woodland on the bank of the river. The earliest part of the old castle is the large tower, which is still standing at the southern end of the building. Dalquharran is mentioned by John Kennedy of Culzean in 1536 however there is reason to believe that this castle may have been built at an earlier date. It was re-built and extended in the 17th century when it was bought by Sir Thomas Kennedy of Kirkhill. Occupied until the 18th Century it was eventually abandoned for the larger mansion castle a short distance away. 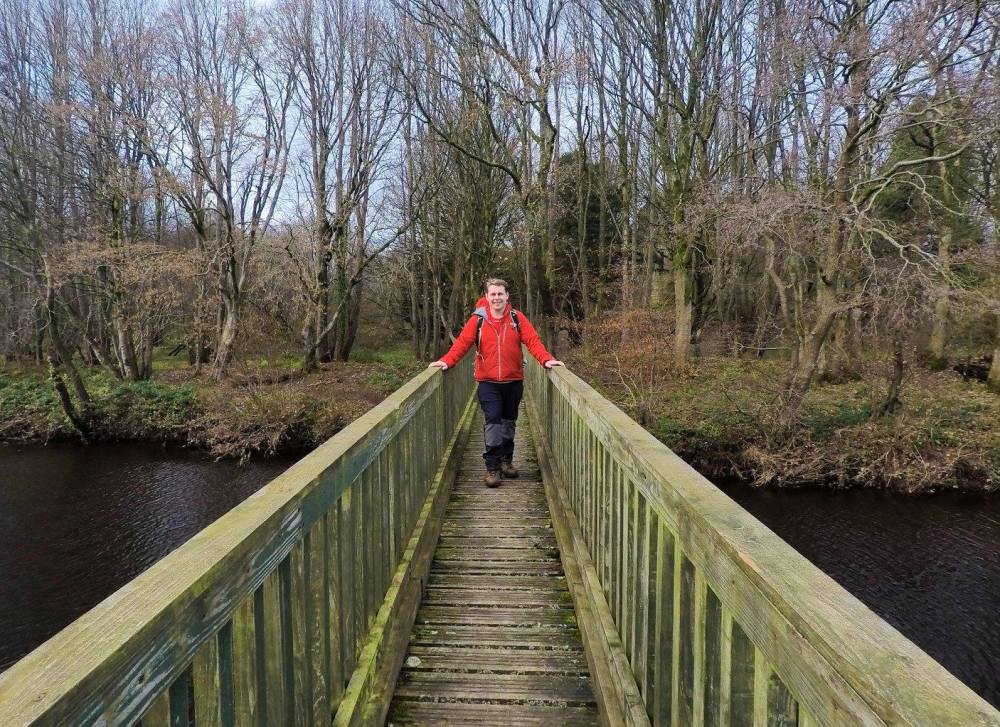 With only a couple of walls and the tower remaining it didn’t take long to explore this site. It is a shame to see that it hasn’t been preserved sensitively; there is a significant amount of litter around, the council have coated the lower part of the ruin in anti-climb climb, leaving the stonework tarnished and black and rough and ready health and safety signs have been put up on almost all remaining walls. But stepping back and ignoring the recent careless treatment of this interesting ruin it is still a fantastic piece of history, just left for us to discover and explore.

Leaving the old ruin behind we continued up the path, making our way through what is left of the old stone gateway, now just stone pillars being increasingly hidden by the surrounding trees. We were still in the trees, however either side of the track was completely overgrown with rhododendrons making it hard to see beyond their dense leafy branches. We were only walking for around 10 minutes when we came to the ruin of the second and newer Dalquharran Castle.

The new castle is a category A listed building designed by Robert Adam, who also designed Culzean Castle situated on the coast not too far away. It was arranged symmetrically around a central entrance hall which at one time had a top-lit spiral staircase (similar to Culzean), the four storey building now lies in ruin after the roof was removed in 1960’s to avoid local taxation. However, before being left to wrack and ruin it had an interesting life! 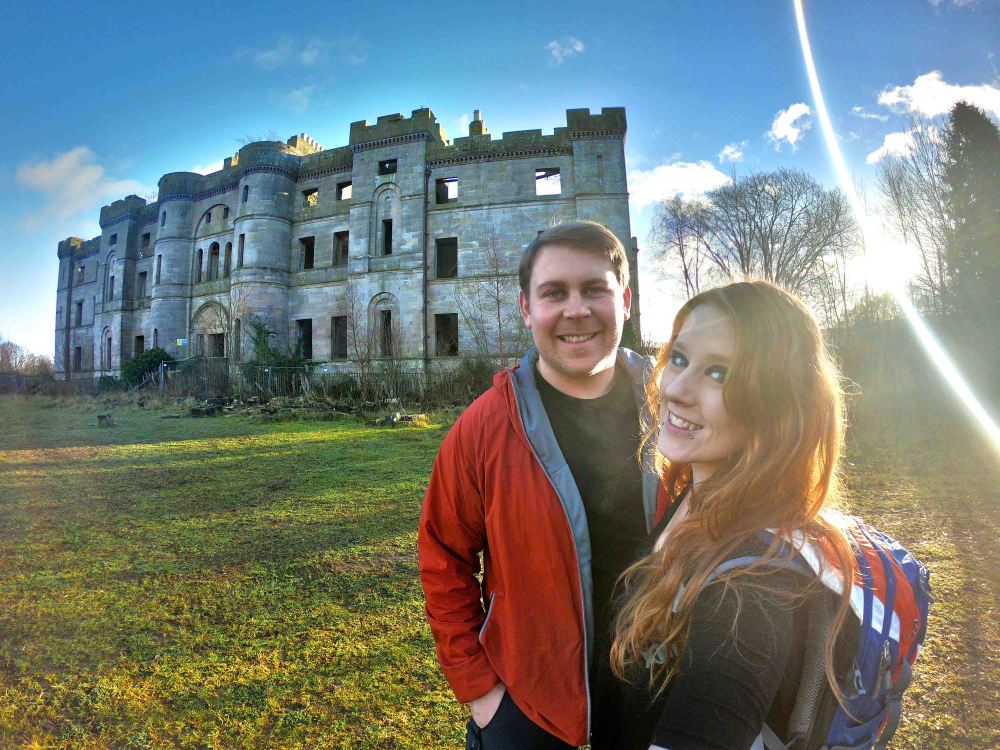 The building was extended in the late 1800’s by the Grandson of Thomas Kennedy, Francis Thomas Romilly Kennedy, to accommodate his wife and their nine children. The house was then sold in the 1930’s where it would be leased out to the Scottish Youth Hostel Association from 1936 to 1939. During the Second World War it was occupied by Langside School for the Deaf, which was evacuated from the city. Before the war was over the estate was sold to John Stewart who occupied the castle with his family, farming the estate. The house was eventually abandoned as it was too large and expensive to maintain, and as previously mentioned the lead roof was removed in 1967, to avoid the local taxation. Then, in April 1971 it became a listed building – a little too late in my opinion! It is a crying shame to see such a beautiful and grand building left to rot when just a few miles away its counterpart (Culzean Castle) is protected and thriving under the care of the National Trust for Scotland. 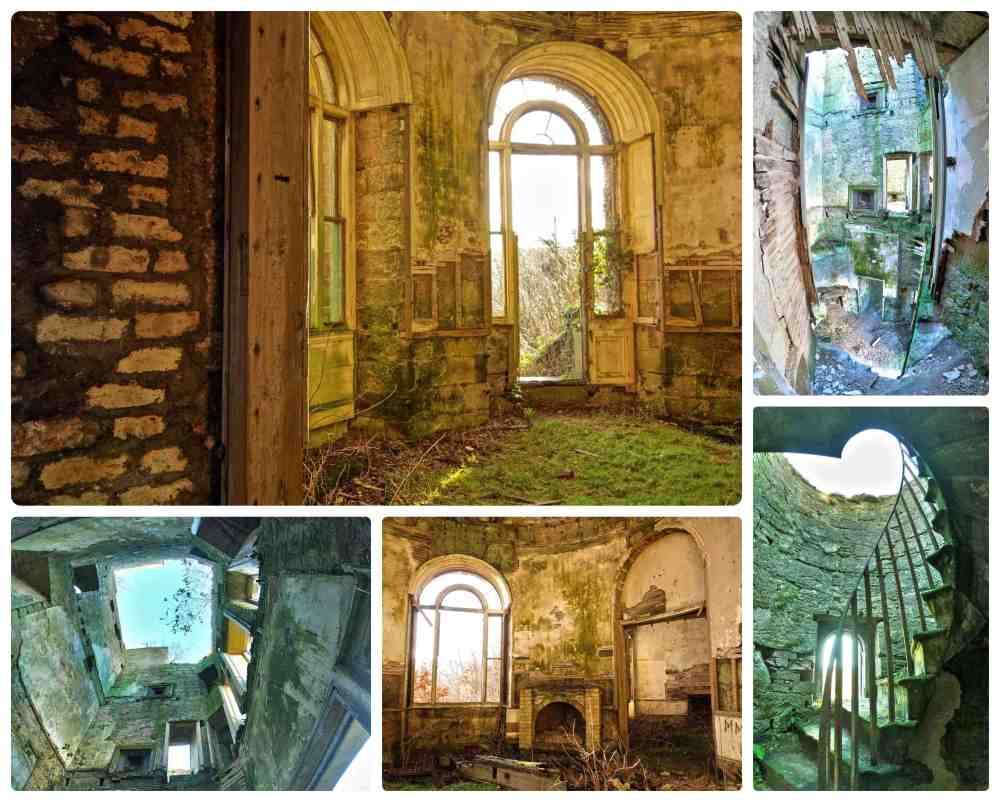 The surrounding bushes and trees grow up to the front of the building, leaving just a narrow path along the perimeter to the front entrance of the old house. A railing to keep the public out has long been damaged and trampled, now trodden into the ground with the weeds growing around the metal. The exterior of the building looked vast, rising up immediately in front of us; the grey stonework was stark in the bright sunlight and the shadows created by the glassless windows and the building’s angular design were a deep black. 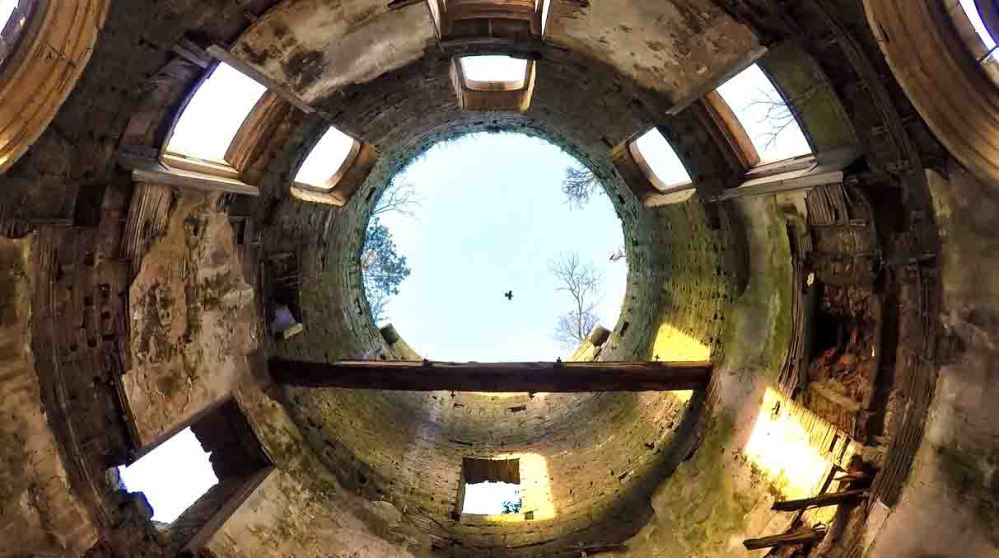 The open doorway stood at the top of 4 or 5 dilapidated stone steps, pushing the foliage out of the way as we climbed, we made our way into the grand hallway. Evidence of the feature spiral staircase survives, albeit not much. The various rooms lead off the corridors, the floor falling away in several places leaving gaping holes down into the cellar/foundations. Plants seemed to be growing out of whatever crevice would support them and ivy trailed down the crumbling walls. Plaster had fallen away in big patches across most of the interior, displaying wooden slatted framed and behind that the rough stonework of the outer wall. 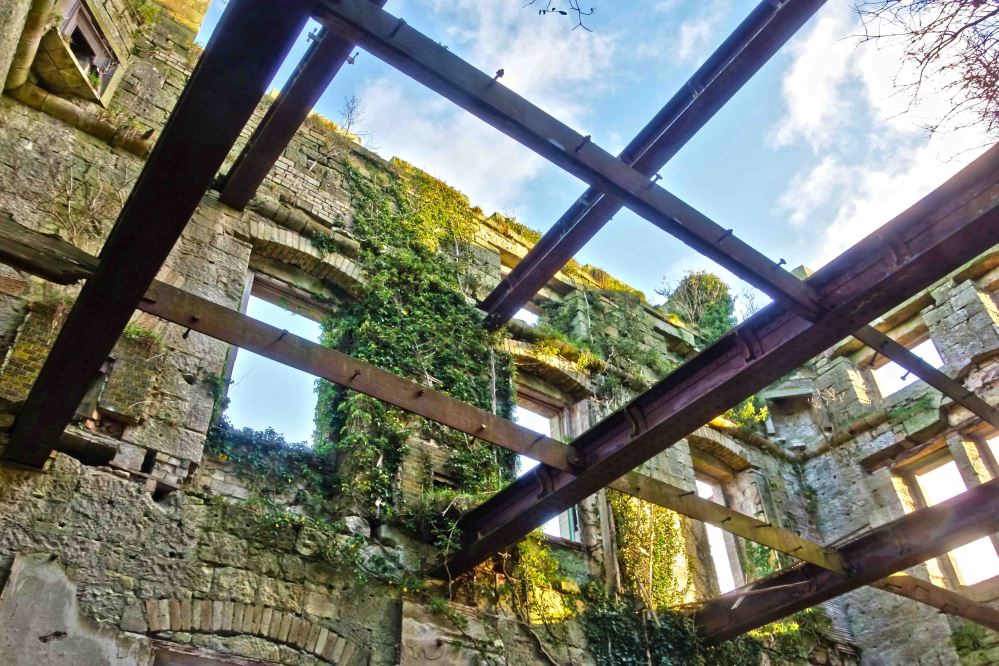 None of the upper floors remain and the blue sky and sunshine was illuminating the rusted metal beams which criss-crossed above our heads. No glass remained in any of the windows and the light filtered in unhindered. The glow of the winter’s sun filled the rooms, casting its warm, almost cosy, light over the decay and destruction of the old mansion. In one of the turreted corners a spiral staircase still survives and climbs the 4 storeys to the roof of the building. The stairs are covered in debris and look as though they could disintegrate imminently but felt pretty sturdy underfoot. At the top you can see all the chimneys, overgrown with grass and trees growing out of them, as well as being able to look down into some of the building from above. 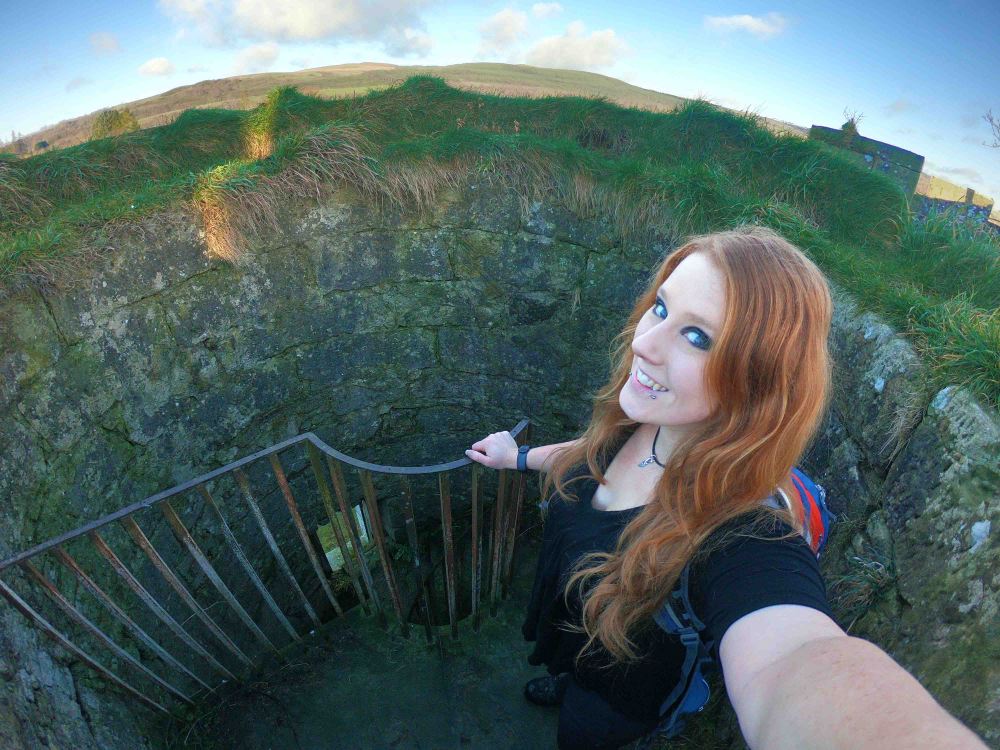 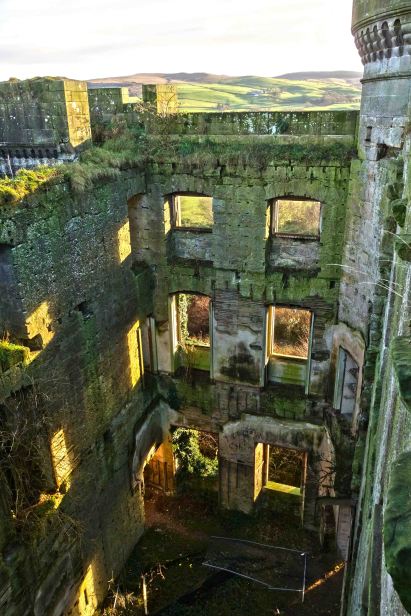 Making my way back down the stairs, what would have been doorways to the various floors are now just openings onto steep drops. Across the way you can see fireplaces dotted up the wall, now floating obscurely in the open space. It was obviously a grand house – you can’t help but notice the large rooms and the big fancy windows and yet all that remains is crumbling stonework and debris covered floors. On the outside the house stands tall and symmetrical a stunning architectural example from its time – beautiful in its construction, yet ghostly in its condition. 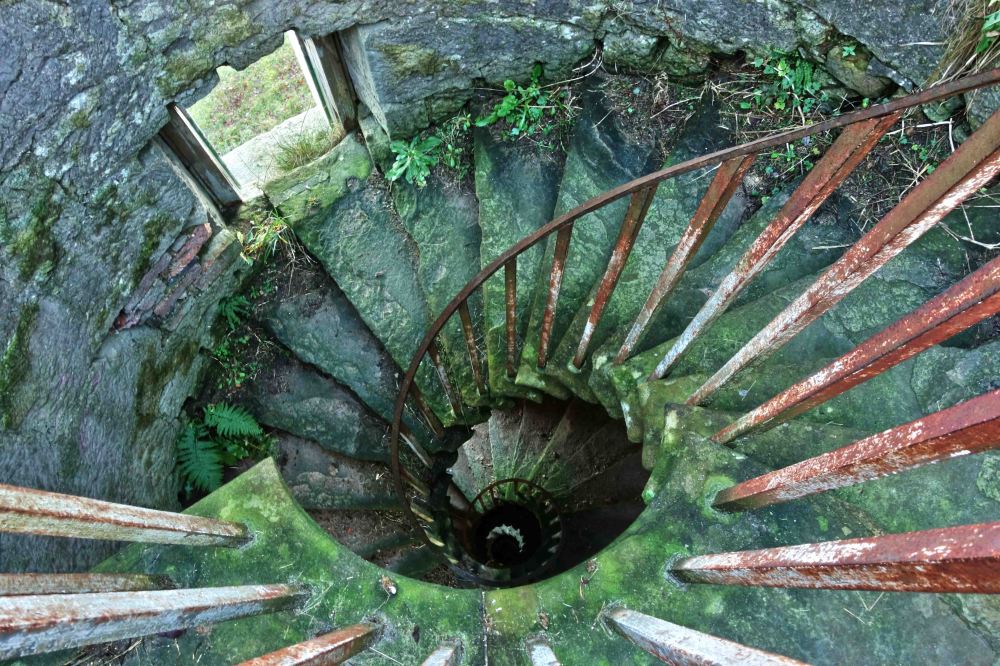 The door out the back leads you to what would have been the courtyard, maybe? What was once the driveway leads straight into this open area which is now grassy and home to a few large piles of stonework. The stables run parallel to the back of the mansion, large open rooms with big arching doorways. The panelled doors splitting and falling apart creating dilapidated silhouettes from the inside. The immense building casts everything behind it in shadow; we walked around the perimeter once more and back out into the sunshine. Tramping through the shrubbery, the brambles clinging to us desperately as we made our way through.

The mansion, still drowning in sunlight but looking no more alive for it, looks down over the village, to the rolling countryside beyond. The golden wash of the sun illuminated the soft winter greens of the surrounding fields; the bright sky was adorned with fluffy white clouds making their way lazily across the mass of blue.

After our ‘urban exploration’ (although I am using the term loosely as there is very little that is urban about this abandoned structure) we meandered back through the rhododendrons and into the more traditional woodland. Once again our path passed by the old castle ruin as we walked towards and re-crossed the river which still bubbled along hurriedly beside us. Before we knew it we were back at the van and ready to leave the little village of Dailly.