The winter sun shone brightly down on the forest park as we drove along the meandering roads. It was a beautiful drive with long shadows falling from the dark clustered trees; the open ground was covered in, now dead, bracken which was glowing orange in the light. Turning off the main road (using the term ‘main’ loosely) we started down the single track lane heading for Loch Doon. In no time at all we were driving parallel to the still, calm water which reflected the powdery blue sky perfectly; the glassy surface mirroring the trees which stood to attention along the opposite shore.

Winding its way through the glen, the narrow road passed by the odd house and farm before we approached the ruin of Loch Doon Castle, where we parked up the van to head out for a wander. Learning from our previous mistake (of finding ourselves on a much longer walk than expected and forgetting to pack some lunch!) we packed a few supplies in the bag before heading up the grassy slope behind the ruin, away from the road and the water.

It really was an unbeatable day, our surroundings were completely awash in golden light with a crisp blue sky above us – we couldn’t have asked for better! We walked past spindly trees growing out the weave of bracken that covered the ground, babbling brooks cut through the land in small deep gullies, most of the time you could hear the soft trickle of the water without actually being able to see where it was coming from or going to. Large dark firs (or spruces, or pines… I’m really sure) dotted the landscape in clumps, silhouetted against the soft azure sky. Passing through a dry stone sheep fold we continued along our path, climbing steadily up the hillside.

Considering the ease of the climb we were treated to fantastic views over the Loch, the reflective water shone bright blue, contrasting brilliantly with the earthy tones of the hillside rising steeply from the opposite shore. The sun sat low in the sky, twinkling through the remaining dew drops clinging to the long grass which covered the ground, coupled with the soft haze which caught the light as it filtered through the branches of trees the whole scene had a rather dreamlike quality.

Continuing along the small trodden track we found ourselves walking between two tree clusters. We were walking into the sun, effectively blinding us and making it near impossible to see the path ahead. Fortunately it wasn’t a bad path but that didn’t stop me from tripping up more times than I care to admit – with Callum chuckling audibly behind me each and every time! The aforementioned dew was still dense amongst the long grass and shrubbery that covered the ground and with each and every step our trousers would become increasingly saturated! However, although mildly annoying in one sense, the droplets which had collected on the dried up heads of dead plants took on the form of perfect glass beads, glinting multi-coloured in the sunlight – and that made the wet trouser legs seem much more bearable, worth it somehow.

We trudged our way through heathery plants ascending a small mound which lay between our path and the Loch, wanting to take some photos of the view we hadn’t seen whilst we had been in between the trees. Our path crossed several small wooden footbridges and past some large boulders as we continued our walk, every so often a lone crow would fly overhead croaking tunelessly, disturbing our conversion momentarily as our attention was brought to the fact that despite being the only humans around we definitely were not the only life up on these quiet hills.

Coming to a view point looking down into the valley with a well-positioned bench we decided it was the perfect spot for some lunch. Sat in the sunshine we chatted away whilst still marvelling at the view, when we both noticed a huge bird flying steadily over the surface of the water – although dark against the illuminated surface we could detect patches of white. It flew to a small island where it landed for a time, came back to where it had started disappearing amongst the shadows on the water and then retraced its steps, this time past the tiny land mass and continuing up the Loch and out of sight. From the size, colours and way it was flying an osprey – we think! 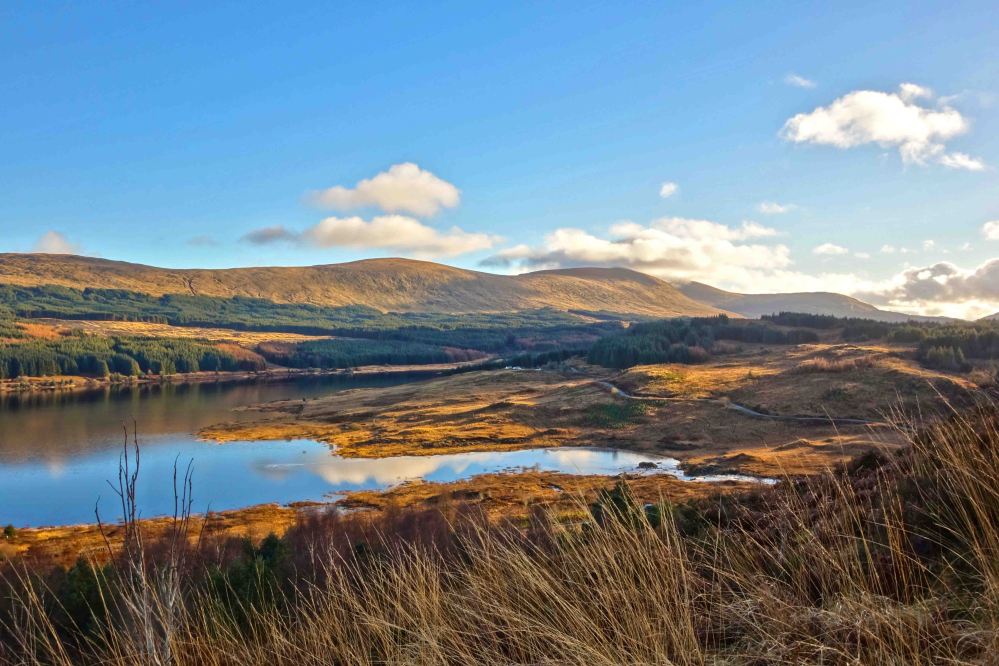 Before descending from our view point we took some more photos of the stunning scenery. Looking toward the end of the lake, further into the glen, the larger hills of the area stood proudly against the dramatic skyline. Big fluffy clouds tumbled theatrically over the tops of the peaks dispersing along the horizon; the light would break through the yellow tinted clouds sporadically, creating fantastic rays which moved slowly across the land below. All very wonderful!

Making our way back down on paths, which were much the same as before, we were eventually deposited on the single track road leading us back to the van. We strolled along nonchalantly, taking our time as we knew we would be making our way home when we were done on our walk. The afternoon was wearing on and although still very sunny we could feel the air growing colder. In no time at all we could see the van ahead of us and our walk was drawing to a close.

Before driving away we had a quick explore of the castle – because who can resist an old ruin! Loch Doon Castle was most probably built in the late 1200’s by the earl of Carrick – either Robert the Bruce or his Father, also named Robert. The castle originally stood on an island in the Loch itself however when the water levels started to rise due to the local hydro scheme the entire castle was dismantled, stone by stone and rebuilt in its present location in 1935 in an effort to save the castle 11-sided curtain wall. Not much remains of the innards but what is is well preserved and the views from the windows are spectacular! 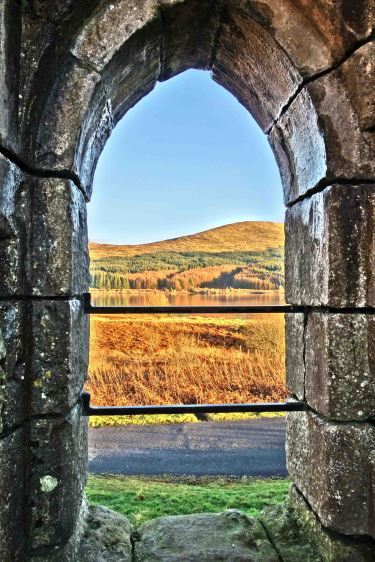 Making our way back home to the Lakes, we took the scenic route through the forest park – enjoying the empty drive along the rolling roads, the single track lane lay out ahead of us cutting our path through the big open views. Clouds had gathered on the horizon and through them we could see a red glimmer, suggesting a dramatic sunset was playing out in the distance. As the sky grew dark the trees turned black against the inky backdrop, the first few stars appearing like rivets in the great expanse above us. As we hit the main road and cruised our way south the first few quickly turned into a mass of twinkling stars, making it very apparent why Galloway is a dark park! 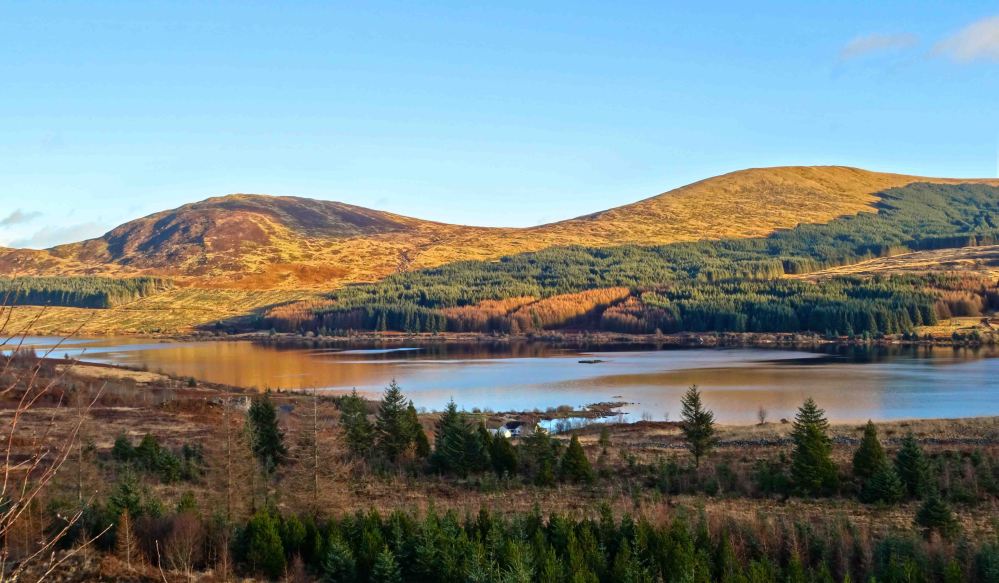