It was a quiet Sunday morning and we had decided to go and explore Pechersk Lavra, the Monastery of the Caves. Heading through the gates we made our way down the cobbled street into the UNESCO World Heritage site. After wandering around a little and feeling very much like the only tourists, it dawned on us that it was in fact Sunday (a day that has no real significance to Callum and myself as we have always worked weekends, it is technically a Tuesday to us!), and most people there were visiting for their faith, not sight-seeing. It turns out we had managed to miss the usual tourist entrance and wander straight in unawares. 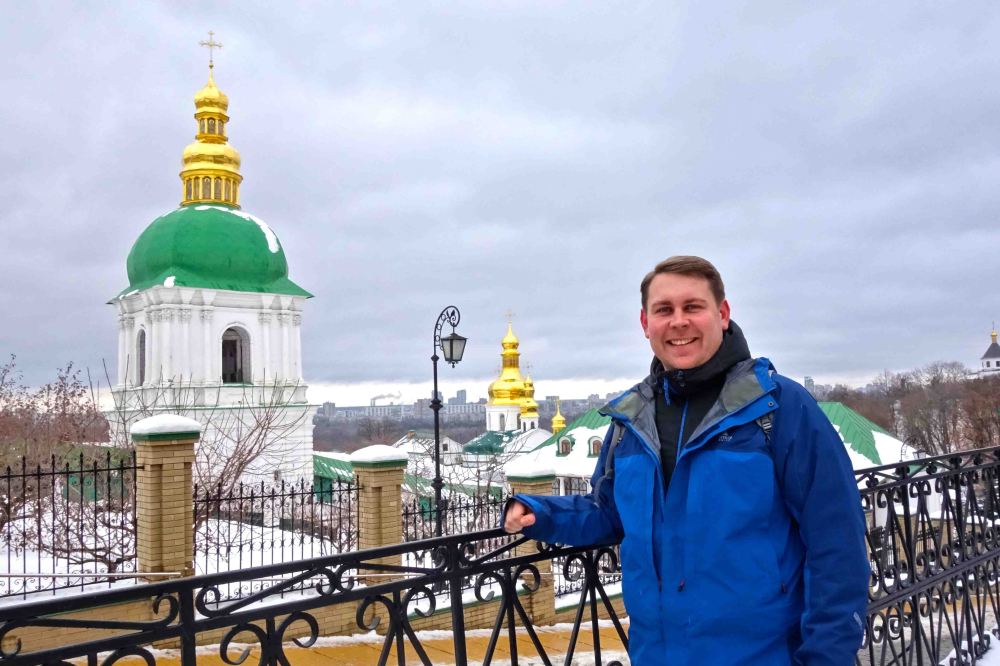 The place felt like a bit of a maze at first with lots of buildings scattered across many different levels, we knew we wanted to visit the caves but we didn’t really know where to start. We decided to pay for a guided tour of the caves, to make sure we didn’t miss or overlook anything important and to garner a little more info about the place. So, with our tickets, and a headscarf for me, purchased we found our guide and made our way through the small cobbled streets to the far caves.

The descending street was lined with little market stalls selling herbal teas, candles and icons, amongst other things. We passed by buildings of interest, various churches and the academy where monks will study during their novitiate. Our guide was very quietly spoken and we had to listen hard to hear the information over the general noise of chatter and footsteps in the street around us. At the bottom of the hill we entered through a small wooden door and proceeded down a wide, white-washed staircase.

Another wooden door led us into a small room with icons surrounded by the usual gold decoration, here we lit candles and were shown how to hold them correctly. I made sure my headscarf was still in place and was given a wrap-around skirt to cover my trousers, then we made our way into the caves. They were small tunnels, no more than 1.5m wide and 2m tall at their widest, poor Callum found himself hunched over for the duration. There was no illumination other than the flicker of the candles which hung over the relics and were being carried by the visitors, this light bounced off the white walls dimly and it took a while for our eyes to adjust to our new found darkness.

The caves were originally occupied in the 10th century by Saint Anthony, at that time just a 3.6m chamber. Anthony attracted much reverence for his faith, others including Theodosius joined him. The caves were extended over the successive years to how they are now, and it was Anthony and Theodosius who established the Pechersk Lavra monastery, requesting more land to accommodate the increasing number of monks residing there. This was when the various churches started being built across the complex; the original building above the Far Caves was wooden, later replaced with the white, domed building that remains today.

As we were lead through the maze of the caves we passed, every couple of metres, a small glass box. These were essentially coffins containing the relics of saints. The relics were wrapped in lightly decorated, coloured cloth. The shoes sometimes poked out the bottom and a couple of them had a hand outside of the cloth on display, withered but extremely well preserved. Over each hung a painting of the saint and a candle which flickered against the dark, thickly painted portraits. We could not read the inscriptions as they were all in Ukrainian; however our guide stopped us at most of them, telling us on what their sainthood focused, whether that be education, fertility etc. If you were struggling to find work there was a particular saint to pray to, and the same if you were hungry, or unwell. Each saint had a particular story of why they entered the church and their monastic lifestyle which ultimately decided what they became a saint of.

Sporadically through the caves we would enter slightly larger rooms, small underground churches – once again adorned with beautiful mosaic icons surrounded in lustrous gold detailing, the candlelight dancing on the surface of the gold, gleaming through the gloom. We also passed by many small square holes in the wall, now glassed over with a candle placed in front; these were the caves/chambers of those who lead an eremitic life.

These hermits, or recluses, would block up the entrance to their tiny room leaving only a small hole, either daily or weekly a piece of bread and some water was left by the opening for consumption. They only knew that the hermit had died if the bread was no longer eaten – the body was then left for 2 years, if after this time the body was found to be ‘uncorrupted’ then the monk had made it to sainthood, if the body had started to decompose it meant they had lived a righteous life but they were not a saint. Our guide told us the stories of some of these monks; one was in solitude for 7 years, one for 12 and another lasted 31 years completely removed from the outside world in devotion to god… 31 years! 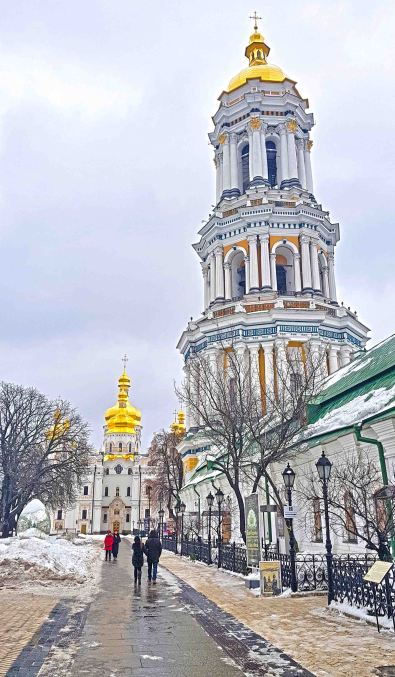 After re-emerging from the far caves into the bright snowy day, we parted ways with our guide and discovered the rest of Pechersk Lavra ourselves. We had a look around a few of the churches, all similar to those we had already seen, beautifully painted and covered in gold and then made our way to the near caves. This time we knew the drill, headscarf adjusted (I don’t even like wearing hats so this felt very alien to me) and wrap-around on, we lit our candles and followed the crowd into the small confined darkness of the caves. 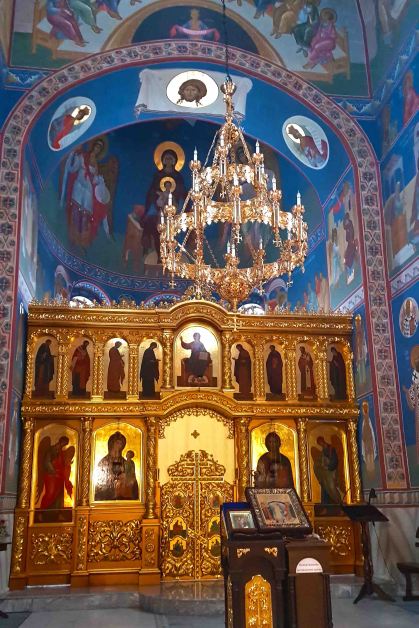 As with the other we found ourselves in close quarters with other visitors, most of which were kissing the glass cases, the photos, the icons, crossing themselves constantly as they made their way through the compact space. Some would stop to kneel down and pray by the relics, causing us to have to step over their legs, navigating in the low light, whilst trying desperately to not accidentally set fire to the people who were close around us. It was a surreal experience.

Before leaving we decided to climb the Great Bell Tower of Lavra, a beautiful 3 storey tower decorated with white columns and pale blue detailing. We made our way up the wide stairway to the open platform at the top where the large decorated bells hung heavily above our heads. The arched windows of the tower look out over the rest of the monastery, the immediate view awash with the green and gold domes of elaborate buildings. Set up on a hill with a great vantage point gives this bell tower a wide spread view; looking over the eye-catching architecture directly below us the view stretches across the river Dnieper to the rest of the city. I enjoyed the juxtaposition of the old traditional, gold-topped monastic buildings set against the backdrop of modern tower blocks.