During our time in Kiev we spent several evenings walking around the city enjoying the ambiance of the place. The time of year meant the streets were illuminated with Christmas lights and there was a jovial atmosphere all around.

As we made our way through the streets, people were milling around and chatting happily, and we were able to take in the architecture of the buildings around us. Some of the older, larger and more ornate structures caught our eye above the moving traffic and bustle of the streets. The streetlights gave everything a warm and inviting orange glow, which contrasted with the winter temperatures we found ourselves in. The trees that were dotted through the streets were laden with fallen snow and looked like something that belonged on top of a Christmas cake. 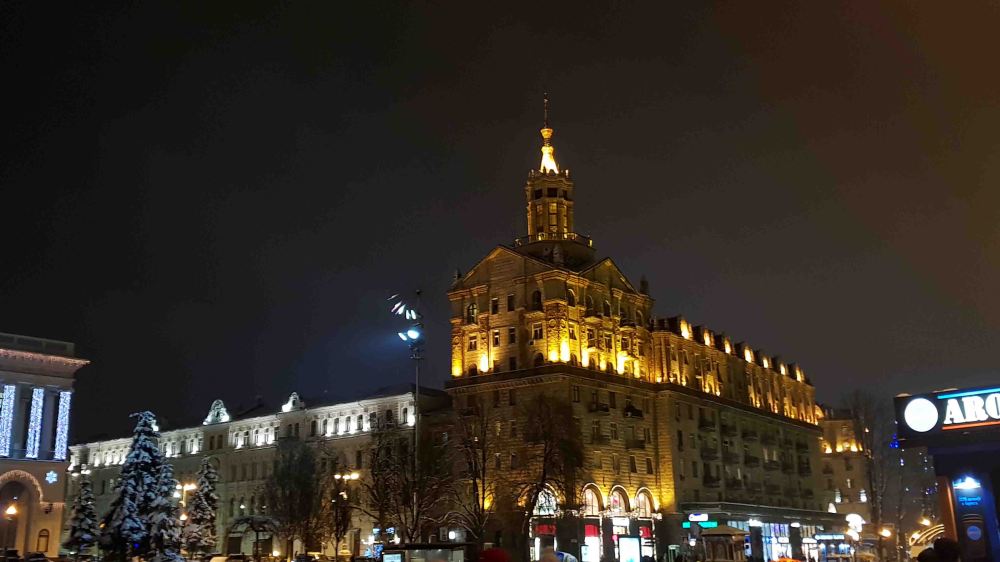 We found ourselves walking down long streets, a mix of shop fronts and apartment blocks. The snow was still piled at the edges of the roads and the Christmas lights stretched the entire length of the street. The Christmas lights reflected and twinkled in the windscreens of the parked cars that lined the pavements and once again everything was drowned in that warm orange glow.

At one point we found ourselves in a quiet part of town, strolling up the steep, snow covered cobbled streets past large houses, tucked away and gated off from the rest of the city. In these areas, which obviously had far less traffic, the snow on the ground lay thick and heavy and the roads looked barely passable, but every now and again a car would whizz up the hill past us not struggling at all. Heading back into the centre of the city we ascended a long meandering staircase which zig-zagged up the side of a fairly steep hill. The illuminated handrails offered a romantic sort to light as we climbed to the top. 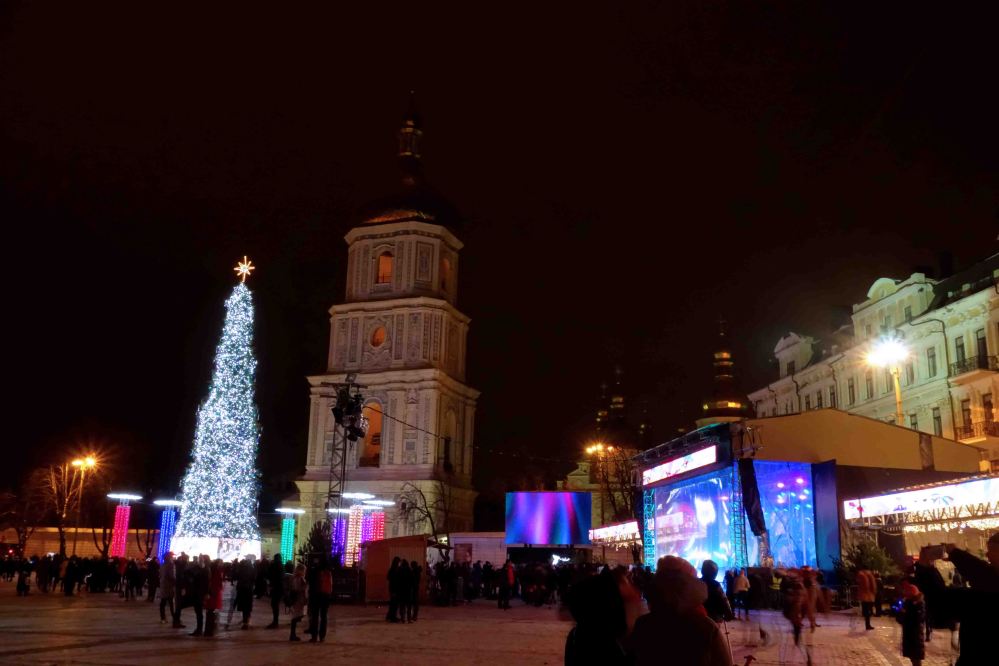 Back by the Christmas markets the streets were significantly busier, people gathered in groups – laughter and chatter could be heard all around. The main square was lit up by the large Christmas tree and the surrounding stalls. Just to the right of St. Sophia’s bell tower there was a stage which offered up a plethora of live music to enjoy. We got ourselves a hot chocolate from one of the stalls and found a spot with a good view, watching the Ukrainian performers sing and dance to the crowd in the square. 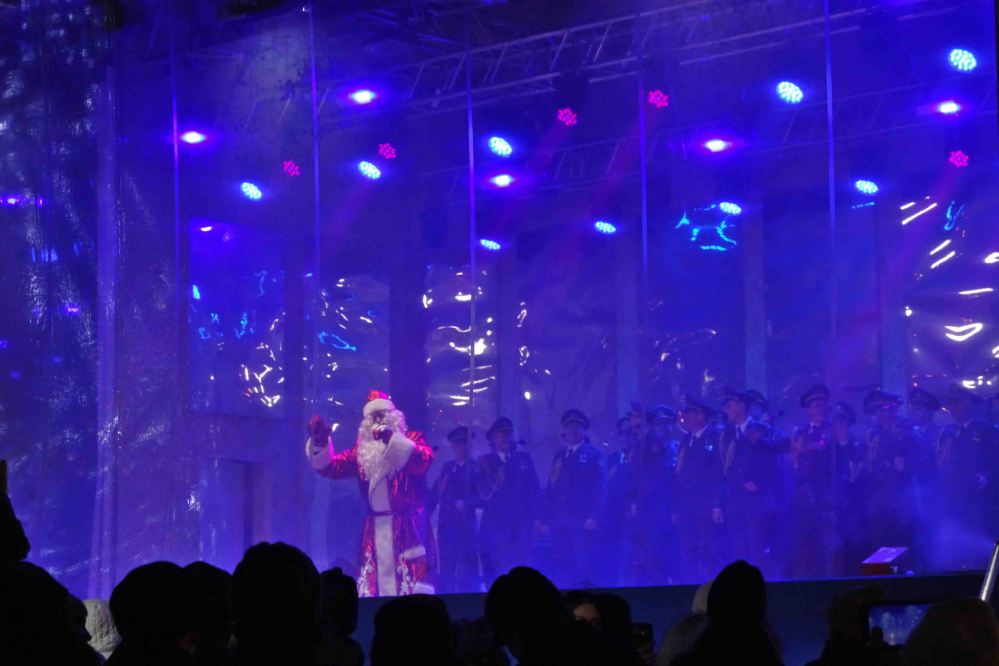 It was a lively event with an array of different musical genres– our personal favourite was the shiny Santa with his military choir! We enjoyed the cheerful atmosphere, unable to understand anything that was being said or sung – that is until someone came on singing Wham! right at the end of the evening. We get enough of that at home, and with neither of us being that fond of Christmas songs, we decided it was time to call it a night and move on! 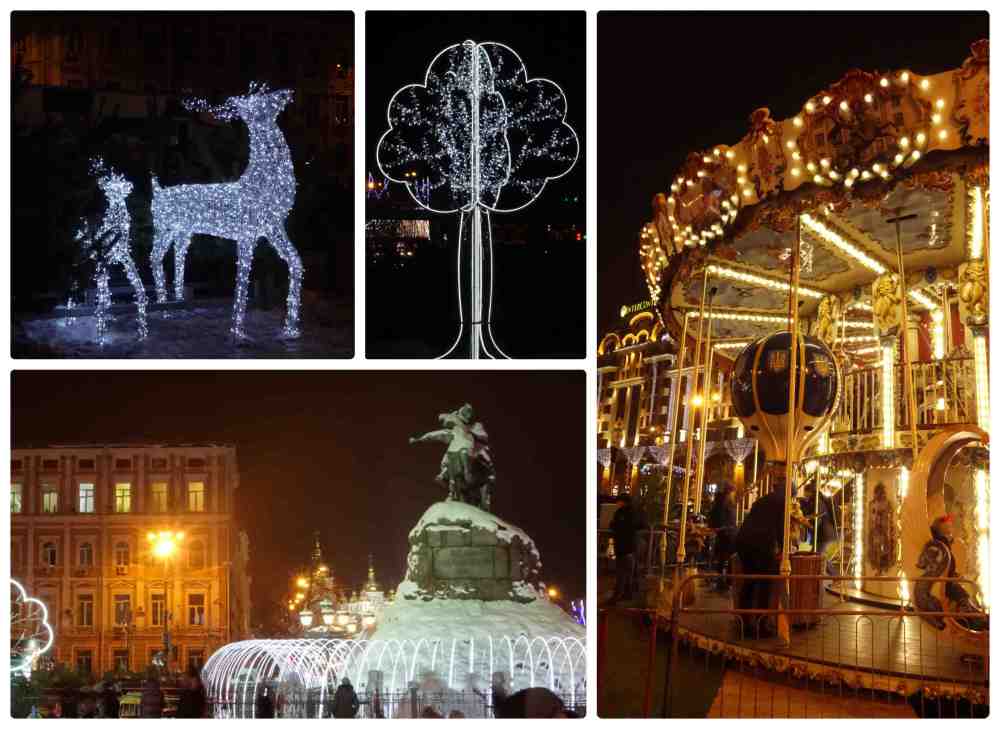 Making our way back to our apartment we passed by a fountain, all lit up and covered in snow, an old fashioned carousel, offering entertaining to young families, and some cool Christmas lights – including cute trees and some sparkly deer! We also stumbled across an awesome little Vietnamese restaurant which was the perfect stop off for some dinner after another day of exploring. All in all we found Kiev to be a beautiful city and the cold, snowy weather made it perfect for our little winter break – we would go back in a heartbeat!