It’s hard to find a quiet corner in Bruges, but wandering the backstreets we were able to break away from the throng of tourists in the main squares and see a little bit more of this beautiful little city. Don’t get me wrong, there were still people milling around – but it all felt a little calmer and more relaxed.

The small streets lace their way through the city, the houses line up dutifully as the roads twist and meander. The pavements are neither notably wide nor narrow; they were spotlessly clean during our visit.  The curb drops down onto the cobbled road, the stones lined up in perfect repetition. A few cars were parked outside the houses but generally the streets were uncluttered and a pleasure to stroll through.

Nearly all the buildings have the same design, the front of the building coming up to a point where the roof meets, the edging made of steps, climbing to the highest point. The windows follow the triangular design of the façade, the ground floor having several tall windows and the number lessening on the higher floors. I wouldn’t refer to the buildings as ornate but there was often subtle detailing around the door and window frames. Generally speaking Bruges is a red bricked town; however the streets are speckled with lighter, painted houses and sandier coloured stone – overall it radiates warmth as the sunshine bounces of the orange tones.

Strolling on we passed by the usual little cafes spilling onto the streets and small independent retailers with interesting shop windows. We also happened across a few chocolate shops and couldn’t resist the temptation – the smell is quite delicious on crossing the threshold (assuming you like chocolate, of course) and immediately you are confronted with a long counter, inside were so many different varieties of chocolates it was hard to truly see everything they had on offer. Around the rest of the shop was what felt like an endless choice of sweets and chocolates, in all shapes and sizes – we chose a small bag from the counter, pin’n’mix style, and were on our merry way – tucking in like kids as we walked! 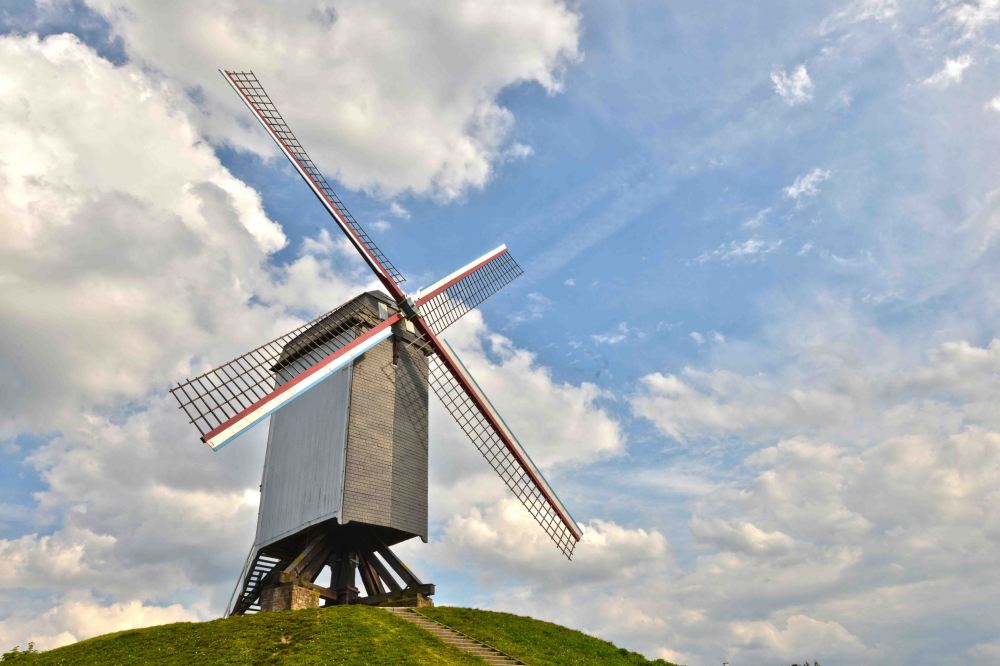 Crossing several small waterways that cut through the city we found ourselves in the stretch of parkland that runs parallel to the main canal. Dotted along this stretch are four traditional windmills, perched up on mounds they stood tall against the blue sky. They were all in slightly different colours and we were able to enjoy their basic construction as the blades were stationary and illuminated by the brightness of the sunny afternoon.

The relaxed parkland saw people relaxing on benches or sitting on the grass, trees grew here and there offering shade to those who wanted it. We kicked off our shoes and ambled along the soft grass, windmill spotting as we went. There used to be around 23 windmills in the area – the four that we saw were Koeleweimill, Nieuwe Papegaai, Sint-Janshuismill and Bonne Chiere. Only Sint-Janshuismill is in its original position from when it was built in 1770, interesting it still grinds flour today. The other mills were rebuilt after storm damage or break-downs and moved to their current locations at various points in the 1900s.

It was wonderful to be able to enjoy what felt like a completely different type of history just a short walk from the city centre. We went from busy streets and large elaborate government buildings to a relaxed green space, looking up at what could be considered as fairly rural architecture/engineering, with barely a transition between the two – a welcomed contrast that added a pleasant variety to the day!