For us, Kortrijk was a flying visit – spending a few hours meandering around the city centre, enjoying a few of the sites and eating some rather delicious ice cream!

I have to admit, whilst we were driving in, making our way through the slightly run down looking areas of the town we wondered whether our decision to visit this particular town was the correct one. However, once we were parked and made our way into the city centre we were glad we stopped off to explore. It was a bright sunny day and a casual amble was just what we felt like doing, we had a few main sights in mind as we walked through the fairly modern streets and into the main square. 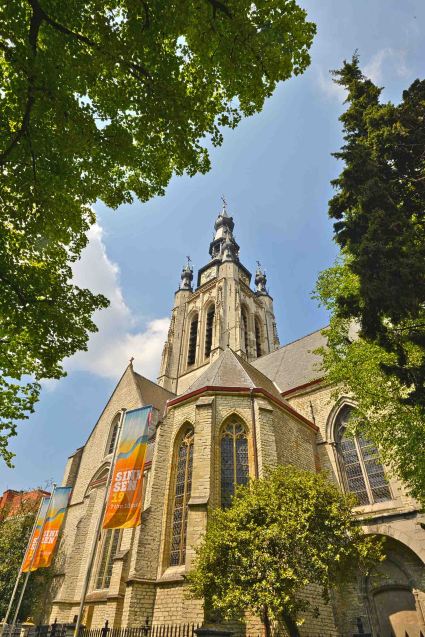 The first stop on our whistle-stop tour was the cathedral. Breaking away from the square, the cathedral was just behind the first set of buildings, most of which were modern and bright. Banners hung across the narrow streets which fluttered in the breeze and around the perimeter were cafes. Their tables and chairs sprawled out onto the cobbles where people sat, enjoying their day and chatting away in the sunshine. There was a nice bustle which we were happy to be a part of.

A handful of trees grew around the building, framing the spires nicely. The sandy coloured stone was bright in the midday sun. To take in the details of the tower and clock we had to crane our necks upwards, the height of the building set against a backdrop of perfect blue, the odd cloud drifting across the scene. 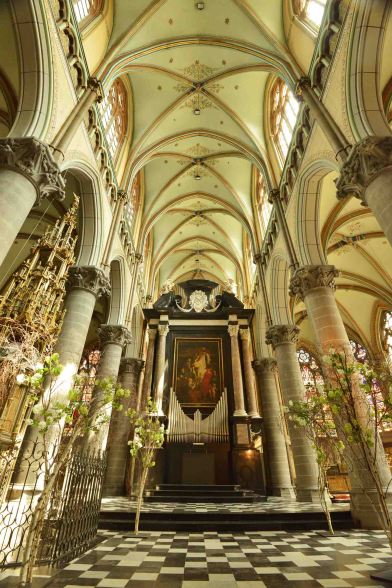 Inside was cool and quiet; the light stones continuing throughout the interior gave this holy place a bright and airy feel. The main aisle was lined with trees, the green leaves and white flowers seemed to glow in the soft light filtering down from the windows above. The ceiling had delicate gold and green detailing, complimented by the flora placed thoughtfully throughout the building.

Our next stop was the Begijnhof, or Beguinage. Just off the bustling main square lies a small archway through a whitewashed wall. Stepping through this gateway transports you into a calm and serene place a million miles away from the city that lies just outside. Founded in 1238 by Johanna van Constantinople, this medieval district was home to religious women who lived in a community without taking vows or retiring from the world.

The 41 houses which remain date from the 17th century, tiny cobbled alleyways meander through the quaint cottages. Along the whitewashed walls are a repetition of doors and behind each of the clearly numbered doors lies a private, albeit tiny, garden and a cottage. The courtyard area has a beautiful tree growing right in the middle and a handful of slightly larger buildings are dotted throughout the tiny streets. Kortrijk Begijnhof was made a UNESCO World Heritage Site in 1998.

Our last stop had us wandering along the shores of the river Lys to take in the view of the Broel Towers, one of the last remaining parts of the medieval city wall. Despite looking like a perfect pair, the two towers were not built at the same time. The Southern tower, which is also known as Speyetoren, was built in 1385 to control the traffic on the river. The Northern tower was built in 1415 and was used as an armoury.

Large, shallow stone steps have been created leading from the small streets right down to the edge of the water. These offer a perfect place for people to sit and relax in good weather, whilst enjoying the views of the city’s main waterway and surrounding architecture – which is exactly what we did! Fluffly clouds tumbled across the bright blue sky behind the towers, and the gently rippling water reflected the green of the trees growing on the bank. We were surrounded by a calm buzz and were happy to while the time away!