Tournai was another flying visit, and an impromptu one at that! We had no intention of stopping at this town as we made our way across Belgium, however on our approach we saw the five impressive spires of the cathedral and we ignored the route we should have been taking and headed straight into the city centre.

It happened to be rush hour as we found ourselves on what felt like a busy ring road, weaving through the traffic we ended up turning off onto a small side street. We couldn’t believe our luck when this fairly innocuous cobbled street ended up taking us right to the very feet of the cathedral. It all happened so quickly but as the road peeled off to one side of the huge building we spied some parking in our peripheries and before we knew it we were parked up and out of the van!

The first thing we came to was the beffroi – another beffroi! The Belfry of Tournai is another UNESCO World Heritage site which loomed over us as we approached. The belfry was first constructed in 1188, used as a watch tower for fires and enemies. It was expanded in 1294 in line with the growing city and had an additional stage added. A fire damaged the building in 1391, and in the following years it was repaired with new bells added to replace the damaged ones. In the mid-19th Century the building underwent a major restoration and yet more renovations began in 1992, which lasted about a decade.

Of course, we climbed the belfry. The cost was a very reasonable 2 Euros per person (much better than Bruges’ 12 euros per person) and the best bit… we had the place entirely to ourselves. We clambered up the old spiralled staircases, the stone steps worn in the middle due to many years of wear. The rooms leading off at various levels housed information about the building, giving an insight into its history.

We came to the first of the outside platforms, the thick grey stone providing a sturdy edge to the narrow walkway. It was a bright and sunny afternoon and a gentle breeze accompanied us as we wandered the perimeter of the tower looking down over the surrounding buildings. Back inside we continued to ascend, making our way past the bells and Carillion and up one final stone spiral staircase. This one was significantly narrower than the rest, the course stone of the walls noticeable as our elbows grazed against the confined edges.

At the top we ducked out through a small door, a minor dip of the head for me and a major stoop for Callum! We found ourselves back out in the calm sunny weather, this platform felt much higher than the previous as we looked down onto the impressive cathedral. The cool blue grey stones of its immense form contrasted greatly with the orange tiled roofs of the surrounding houses. The streets below curved through the building and the tiny ant-like people made their way through the quiet streets.

The moment was pretty great, we stood on the shaded side of the tower, hiding from the hot sun and enjoying the gentle breeze, looking down over the beautiful architecture of Tournai. It was perfectly peaceful as the muted sounds of people enjoying themselves drifted gently up to us, and as we had the entire belfry to ourselves for the duration of our visited, the calm remained completely undisturbed. What made this tranquil moment even better for us was that we spotted a big red boxer meandering through the streets with its owner – as we watched the characteristic bouncy walk and the inquisitiveness of this vibrant doggo we couldn’t help spending some time thinking about our old pup and all the things we miss about her!

It was one of those rare moments where time just seemed to stop, nothing to make us hurry on and nothing else to really do with the day and so we took our time. We chilled out, watched the world go by and enjoyed every second of it. 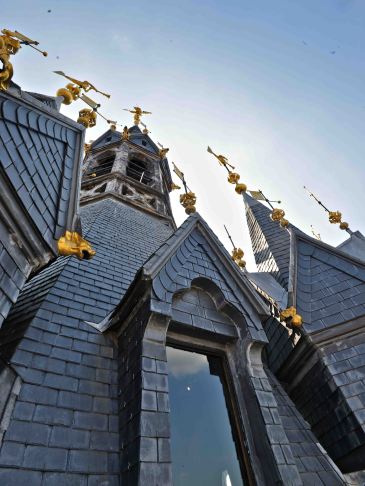 Eventually dragging ourselves away from the view outside we began the descent of the tower. Just as we were passing the Carillion, the bells began to sound, the noise reverberating through the narrow stone passageways. The bells were just a floor below us so we hurried down to see them in action! As far as I can remember this is the first time we have ever been able to time it right and actually be stood in front of the huge bells as they make their melody – what a clamour! Back outside we ambled over to the cathedral to have a look inside. There was a lot of restoration work going on and a rather sullen albeit pleasant chap walked around with us pointing a few things out. Between his broken English and our feeble French, there wasn’t much conversation but we managed to learn a few things about the place.

The construction began in the 12th century on foundations which date even earlier, the building combines the work of three design periods. The Romanesque nave offers a heavy and severe character which contrasts with the transitional work of the transept and the fully developed Gothic design of the Choir. The transept part of the building, with the five impressive bell towers and its semi-circular ends, is probably the most distinctive. The cathedral was damaged by a tornado in August 1999 and the subsequent assessment revealed underlying structural problems. The cathedral has been undergoing extensive repairs and investigation ever since, with the Brunin tower being stabilised in 2003. The Cathedral was awarded UNESCO World Heritage status in 2000.

It was a dark, rather suffocating building. Any noise was swallowed by the muffled silence and the imposing structure of the scaffolding added a certain solemnity to the dim and rather gloomy scene. It was pleasant nonetheless and offered some pretty and intricate stained glass windows, but we didn’t hang around long.

Back outside we headed for the main square. Like most, the perimeter was lined with cafes and restaurants spilling out onto the paved street in front and full of chattering people. We sat by the fountain and watched the world go by, it really was a great spot for people watching and we whiled away the time enjoying the sunny ambience and amusing ourselves with our own nonsensical chatter. Although we only enjoyed a short visit with very limited exploration, Tournai stands in our memory! 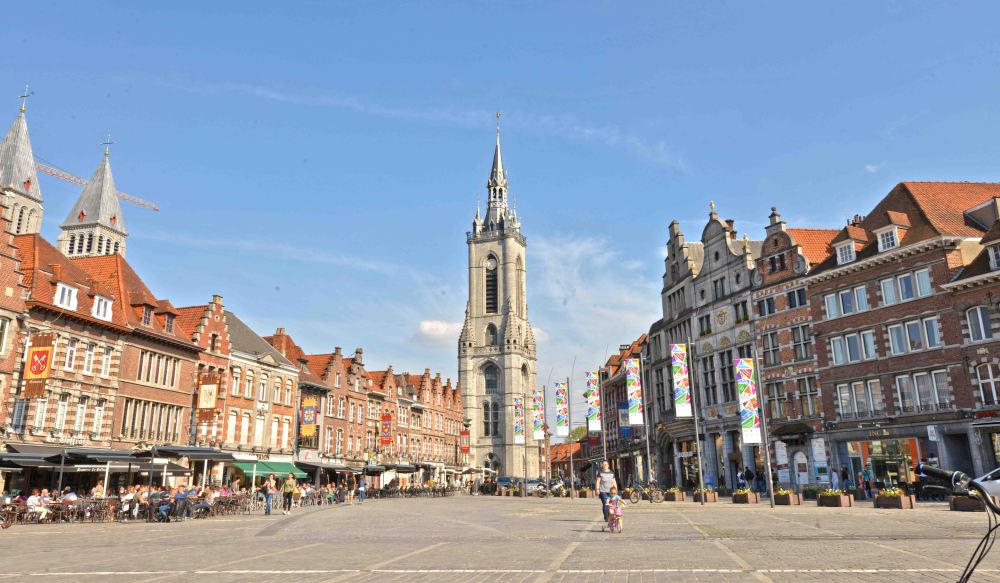