Another beautiful day and another opportunity for a walk after work!

As the evenings get longer we can afford to choose the slightly longer, more challenging walks as long as they are close by. This time we decided to head to Patterdale and tick off a couple of the peaks above, Arnison Crag is the first, leading up to Birks.

We parked up in the village and found the path that heads up behind the hotel and through a small patch of woodland. It was a beautiful, bright sunny afternoon – hot in the sun with only a slight breeze on the valley floor. We climbed gradually along a rocky track, big flat rocks sunken in the ground with a gravel track filling the bits in between, at this stage it is an easy path which we hopped, skipped and bumped along. Reaching a gate, instead of continuing through it, heading straight on, our route went left following the dry stone wall up towards Arnison Crag, at a much steeper incline than we had faced thus far.

The track was grassy; luckily the ground was dry as I imagine it could be horrendously slippery in wet weather! Continuing to follow the dry stone wall we passed a couple of big overhanging trees, having had very little to impede their growth, which offered us a little shade. These trees were fairly low down on the walk and after a certain height there was very little in the way of shrubs and trees – however we did start passing larger craggy sections the further up we climbed, giving us an insight as to why Arnison Crag was named as such.

The grass was glowing almost yellow in the bright light and directly behind us as we climbed was Ullswater, looking brilliant blue and stretching down through the valley. Our position was at the bottom end of the lake, so even as we got a higher perspective we couldn’t see much of the 9 mile long body of water, its bends hiding the rest behind the surrounding fells. The gradient of the walk meant that every few minutes we were significantly higher than before, with a more impressive view each time – we turned around to take in that view many times before hitting the top.

Continuing up, passing through a small group of herdies mindlessly chewing the grass, the breeze was becoming stronger – which we were pleased about. We couldn’t see exactly where we were heading on this one, but ahead of us Birk stood tall and slightly intimidatingly – the side we would be climbing cast completely in shadow and looking very steep. We followed the grassy path past a few more small rock faces before finally coming to the peak we were looking for, the wind was much stronger up there so we didn’t hang around long – luckily we had been able to enjoy the view all the way up so we didn’t feel like we were rushing away.

With Arnison Crag done it was time to complete our second Wainwright of the evening, we descended off the top of and followed the grassy track leading us down into the gully between the two fells – it always feels a little bothersome to head down, only to head up again – especially when the up looks as though it goes straight up, right ahead of you. Following a dry stone wall, we passed another cluster of sheep, this time swaleys, nibbling the grass at the bottom of the gully. A small trickle has worn the ground away in such a small space that you couldn’t see the water, only hear between the tufts of longer, overhanging grass. We followed this trickle a short way and then broke off to start our climb up Birks, the path started at a reasonable steepeness for a hundred metres or so and then started to cut a less gradual route up the side of the fell.

It wasn’t a well-made path, but trodden and easy to follow – the remnants of a tumble down dry stone wall helped to mark our way. The benefit of a steep incline is that progress is swift; you don’t have to walk for long to cover a decent height gain. Having changed our walking direction, we were now facing Ullswater – although Birks was very much in the way. Behind us the endless peaks were streaked in what was now the hazy sunlight. Before we knew it we were reaching the top, the walk plateaus and we emerged into the sunshine. After what felt like a bit of a dark climb in the shadows it was lovely to come out into  that warm golden light, and be treated to the view from the top. 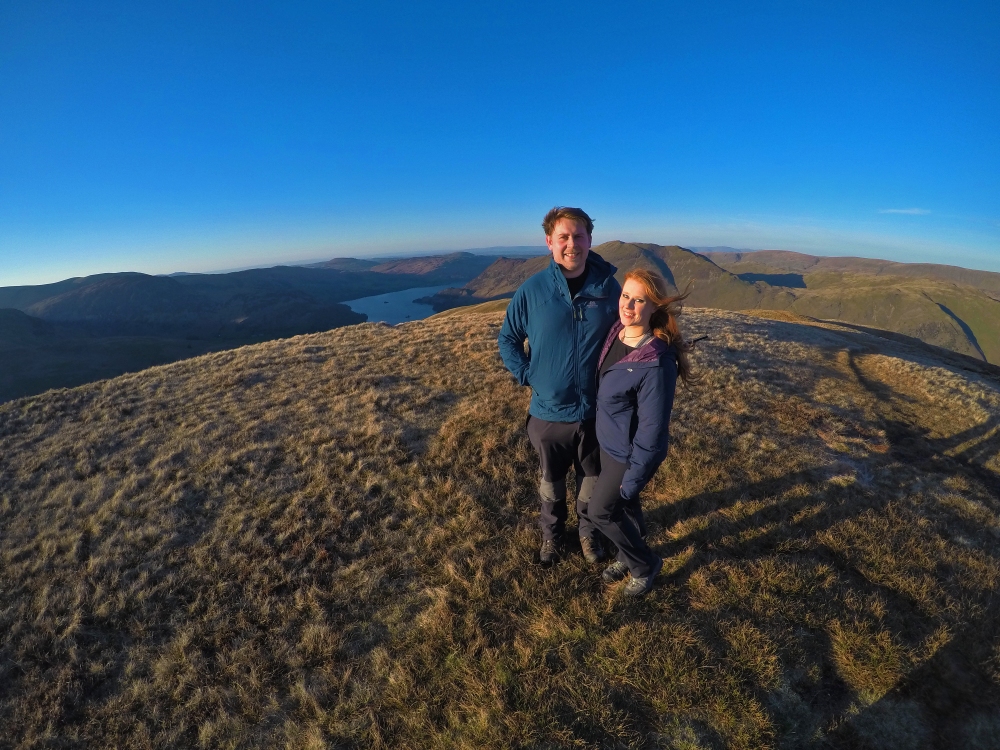 A similar view to Arnison, Birks look onto the southern end of Ullswater, overlooking the villages of Patterdale and Glenridding. Golden hour was in full swing and everything was glowing rather nicely. Once again we could feel the full force of the wind on the exposed top so we didn’t hang around long, although plenty long enough to commit the view to memory (and memory card!)

Walking away from the lake we started our route down, at first heading towards St Sunday’s Crag – another Wainwright we haven’t ticked off yet, it looked so close that for a moment we considered running up there, however I use the term running loosely and we were already losing light so the consideration didn’t last long – another walk for another day. The path splits and heads around the other side of Birks from which we came up. The  sun had dipped low behind the surrounding fells and again we were walking in shadow, the track was narrow and rocky descending only a small amount as we walked toward the lake and back towards Patterdale. 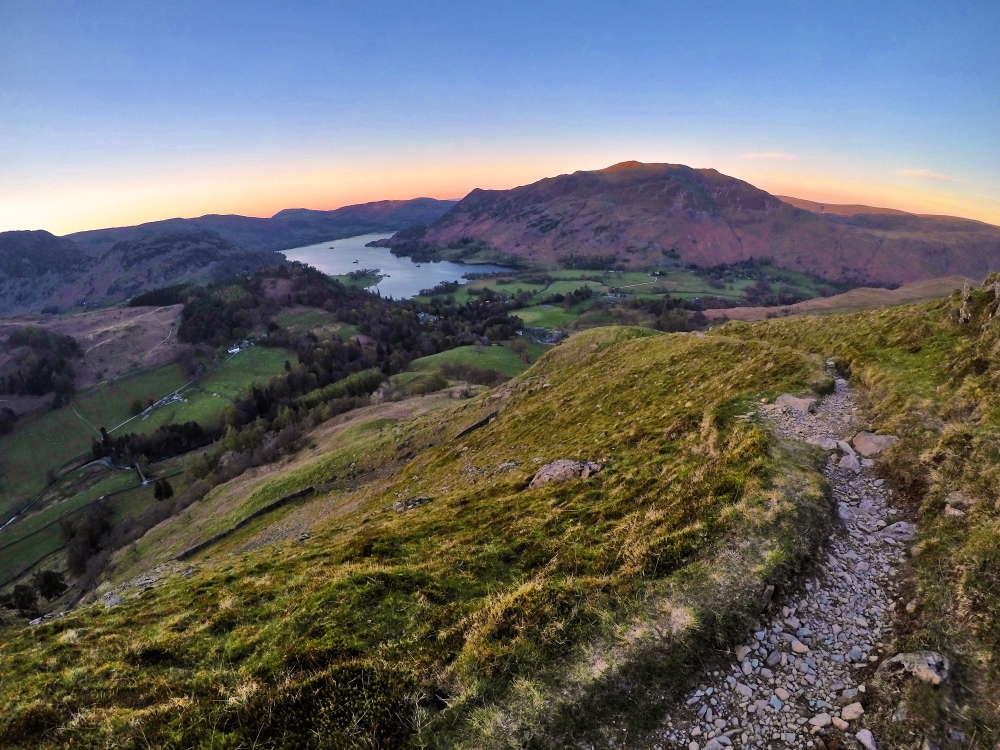 We trotted along chatting away, setting the world to rights like we always do with the beautiful dusk sky ahead of us. We are always surprised by the lack of people who walk in the Lakes in the evenings; dusk is so beautiful, calm and quiet and yet everyone seems to stick to being out in the middle of the day when everyone else is. Although it suits us down to the ground as it means nobody else it out when we are!

Before too long the path turned into a downhill, intermittent boulder steps and gravely/rocky track and as with the ups we were able to eat up the descent in a short distance. Only a short way from the end I started to feel a tiny bit wobbly, realising I hadn’t eaten anything since my peppers and hummus at lunch time I had some emergency chocolate and instantly felt much better – just enough to get me home for dinner. Nearing our return everything levels out, we end up walking through fields, ewes and lambs scattering as we passed through, under a few old gnarly trees and then back to the gate we didn’t go through at the beginning of the walk. Now retracing our steps, we headed back through the trees and around the hotel and we were back, ready to head home.