We were hoping to go camping in the fells the evening before but the forecast was miserable for pretty much everywhere so we decided to rearrange. Waking up the next morning however, it was a glorious day – I’d say one of the best we have had in the Lakes. Having a full day ahead of us we headed to an area we rarely get to do a good walk and hit a few more Wainwrights we hadn’t yet done.

Driving to Bassenthwaite definitely put us in the right mood for our walk, the sky was blue with big rolling clouds and visibility was fantastic. We parked in a small village called Thornthwaite, crossed the road and immediately found ourselves on the footpath. Barf was our first stop for the day, it loomed over us looking impossibly steep (which it was, our route actually headed around the back!) The path was a well-made woodland track, the sun shining through the trees was giving everything a greenish glow and casting dappled light on the floor. We aimlessly followed, chatting away and before long realised the path disappeared into loose scree, a good start as we had gone the wrong way in the first 200m, fortunately we only had to retrace our steps 10-15m and cross the stream we had been walking next to up to this point.

The mini detour wasn’t completely wasted; we found a very tired looking bumble bee, stranded on the endless rocks and barely moving. We took him down to a more shaded area and set him up on a flat rock with some apple, which he wasn’t too interested in, and then a tiny piece of melty chocolate (the closest thing to sugar we had on us) and he got stuck right in, it was cool watching his little tongue come out. I like to think he is still flying around pollenating the Lake District, thinking of us fondly…

Now on the other side of the babbling beck, our path continued through the trees getting gradually steeper as we progressed. Walking through the trees was beautiful; the tall trunks made it feel quite airy and the spring leaves/needles were light, casting that same green glow on us and our surroundings. Before long the path was at a significant incline, winding its way through the trees covering a lot of height gain in a small distance. The path was varied, woodland floor mixed with rocky patches and a few teeny tiny scrambles. We would break out of the woodland every so often and be offered fantastic long views back towards Keswick through the treetops. The sun was hot but there was a decent breeze – perfect walking weather.

We rounded the back of Barf, re-crossing the beck we crossed early on and started the final ascent to the top, this section was much more gradual, however we suddenly missed the shade that the woodlands had been providing us and the breeze seemed to have disappeared almost completely. Now we were out on the grassy tops, the usual lakelend fell-top, following the small trodden track winding up to the peak with those open views towards Keswick to our right. Only when you come over the brow of the hill do you get the full breadth of the view, the full length of Bassenthwaite Lake (technically the only lake in the Lakes) with Skiddaw and its accompanying peaks looming up behind it, following right round to the view we had already seen over to the West.

Just as we got to the top a chatty ramblers group came up from the other direction and looked to be settling down for lunch. As much as I love it that people get out and enjoy the great outdoors, I much prefer it when there is no one around, so we took a couple of photos and carried on our merry way – terribly antisocial! From this point on the paths remain those gassy tracks through what looks akin to open moorland. The wind had picked up significantly; small birds (which I believe to be meadow pipits) swooped around fighting against the gusts before giving in and returning to the ground and the shrub.

Our next stop, Broom Fell, looked a stones’ throw away and we had done most of the climb – we trotted along thinking the rest was going to be a piece of cake. There were a few boggy areas on the top to try and avoid but nothing terrible and before we knew it we were doing the last wee ascent to the top of our second Wainwright of the day. It wasn’t particularly steep and compared to most it was a good path, however it just seemed to keep going. You were ‘nearly there’ for a long time as the ground kept curving away from you in an upwards direction. I tackled it with more speed than I would have done had I known, and once I got started I didn’t want to lose momentum – it is safe to say I was out of breath by the top. Callum paced himself better and joined me eventually, he paced himself so well that I had managed to fully compose myself by the time he got there. And the view was great, as well as snippets of the previous scene we were also treated to long views over the Whinlatter forest and into Scotland. 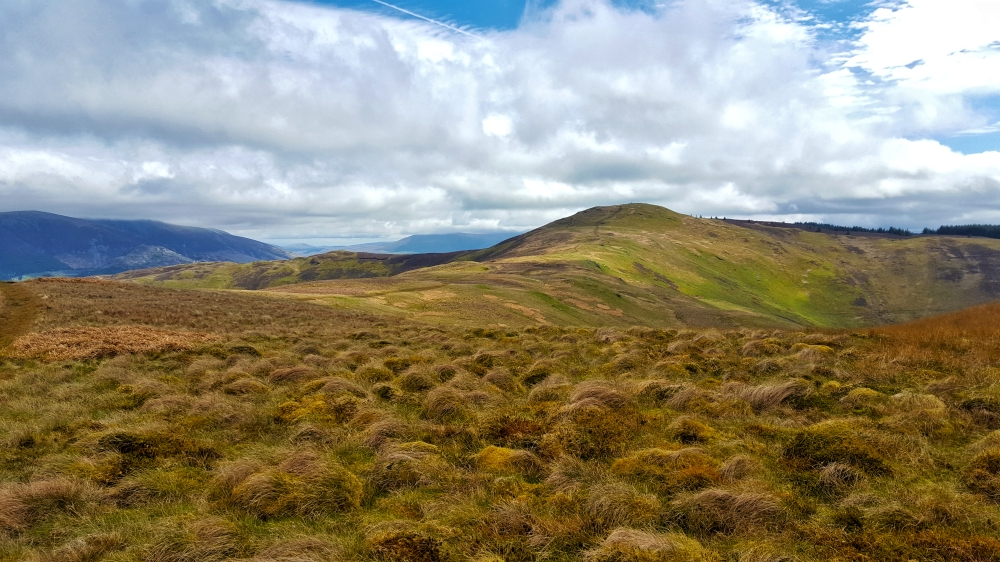 Sat on the top eating our lunch we quickly realised that these higher peaks had been protecting us from some seriously strong wind on the way up. It was blowing a gale; the wind was cold and there were threatening clouds rolling ominously in our direction. The next peak was very much the same, grassy paths, slight decline followed by a bit of an incline and very gusty! Reaching the top of the Lord’s Seat there was a dry stone shelter, luckily in the right direction and we sat behind it sheltering and planning the rest of our walk. We had planned to hit one more, our fourth Wainwright, a couple of miles further along before heading down. Looking over to it changed our minds – it looked as though the clouds would break at any minute and the wind was strong. We cut our day short and decided to head back and save that one for a different day. Three would have to do. 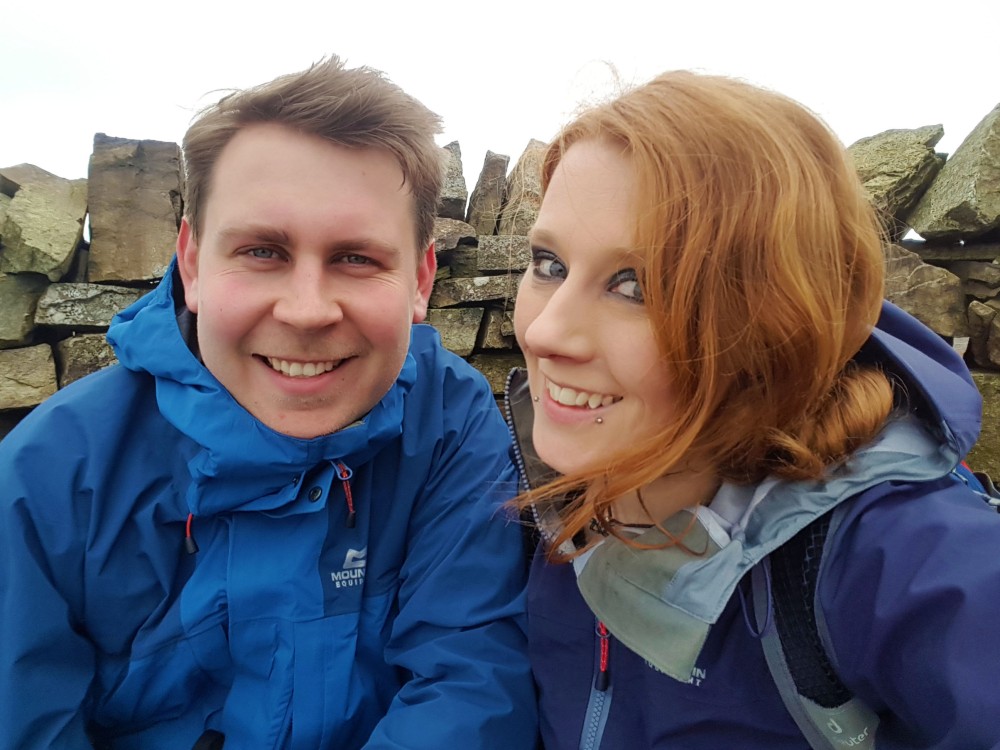 We picked a new route on the map leading us down, back around Broom Fell and down through Whinlatter. Skirting around the top, we followed sheep tracks around the side of Broom, we were back in the sunshine by this point but it was still windy enough to have our jackets on and hoods up. As soon as we got round the other side, climbed over a stile into the Forestry Commission land and dipped down a little it was back to being still and warm, just as the day started out and nothing like what we were in 15 minutes ago. 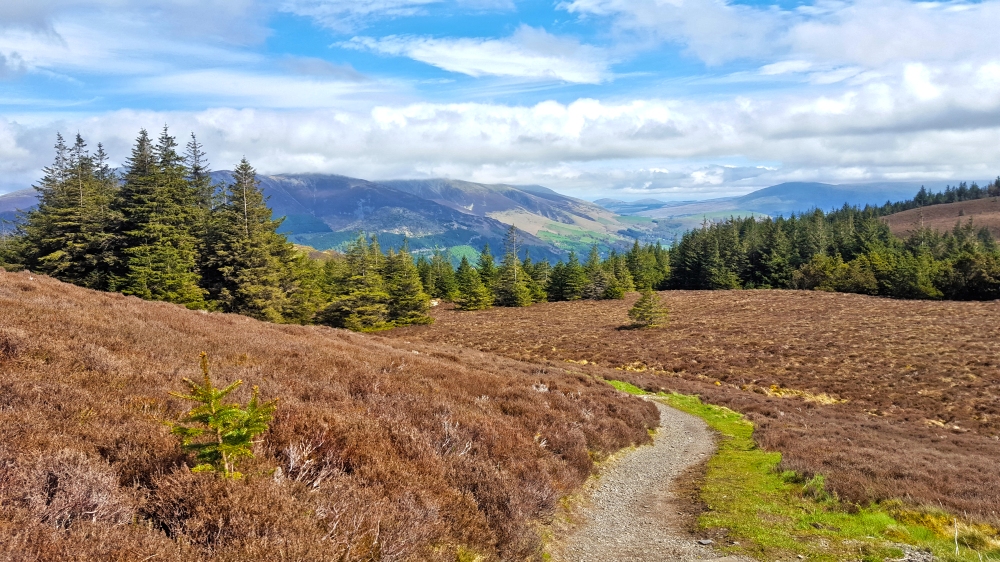 We ambled along the extremely well-made FC footpaths which wound through the younger trees and past numerous bog patches filled with lively tadpoles. We were back to thoughtless walking and fell back in to our usual chatter; we cover an awful lot when we are up the hills. Eventually we found ourselves on the much wider FC tracks which wind through the forest and the mountain bike tracks. The  road took was a couple of miles past where we needed to be, only higher, so we had to make sure we took the right junction to finally head back on ourselves along the bottom. In and out of the sunshine, we passed wee streams as we mooched down. Finally hitting our last footpath we followed the beck into the village of Thornthwaite and did the last small stretch along the quiet country road, with lots of sun and little breeze, back to our starting point.

A beautiful, varied walk – my favourite type with lots of interest along route, some awesome views and a few more Wainwrights ticked of our list, albeit one less than we originally planned.